Over the years in Japan I’ve racked up a number of castles on my visits and the one in Kumamoto is certainly up there as one of the most impressive. Kumamoto Castle is considered one of the three premier castles in Japan, along with Matsumoto Castle and Himeji Castle. Due to its appearances in the likes of ‘You Only Live Twice‘ (1967) and Akira Kurosawa’s ‘Kagemusha‘ (1980) the one in Himeji is likely to always be my personal favourite but Kumamoto is a close second thanks to the beautiful scenery surrounding this modern reproduction. It also has its own part in movie history as the legendary Kurosawa filmed a lot of the King Lear inspired ‘Ran‘ (1985) in Kumamoto prefecture including its castle in the city of the same name.

Yet again it was another early start as we took a couple of bullet train rides from Nagasaki to Kumamoto station via Tosu. Like Hachiko waiting to meet its master in Shibuya all those years ago, Momiji (the family dog) was standing by to meet us at our destination alongside my girlfriends parents of course! 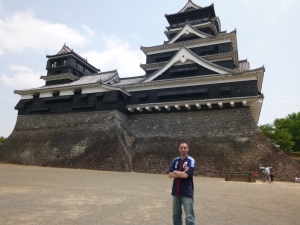 It was to only be a brief stop in Kumamoto to see the vast castle area which dominates the city. The outer area is free for all to roam around but it’s 500 yen to enter the inner area that hosts the main towers which were rebuilt in 1960. The largest tower stands about 30 metres tall (on top of the stone wall) and is a six-storied one whilst the smaller one next to it has four stories.

After a couple of cheesy photo shots outside the castle we went inside Hon-maru Goten Grand Hall which is a reconstruction of the original palace’s living quarters that were destroyed during the Seinan Civil War of 1877. 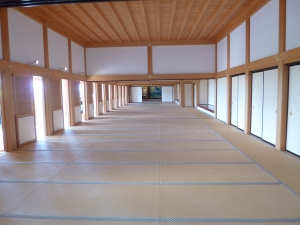 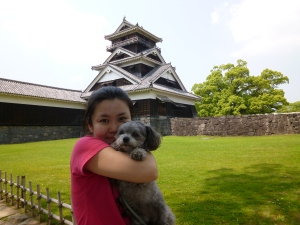 The 5-storied Uto Turret however is a survivor of that siege and dates back to the period of the castle’s construction. We ascended the steps of this place and were yet again rewarded with some pretty awesome views of the main tower and the mountains in the distance of some beautiful green countryside. 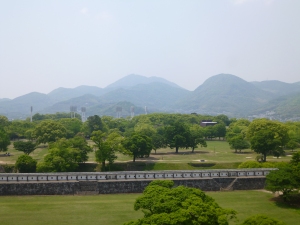 The signature of this castle is its steep curved stone walls which were designed to prevent attackers from penetrating the castle. It was constructed in 1607 and was designed by Kato Kiyomasa; a very knowledgable feudal lord who ruled the area. It seemed like my prospective father-in-law had a lot of respect and admiration for the experienced Kiyomasa as he proudly told me of how these fortifications are highly regarded for their strategic effectiveness. 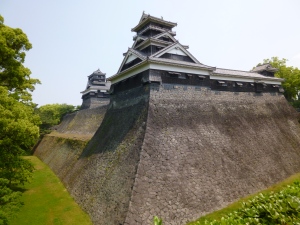 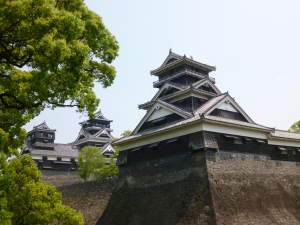 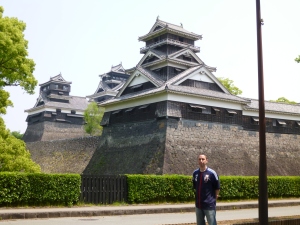 There was just enough time to sample a local dish by way of Kumamoto ramen at a local restaurant. There are of course many types of ramen all over Japan and this particular one is a variation of tonkotsu ramen with decidedly thicker noodles and a soup that was a bit more mild and lighter than its usual sort. After that it was time to move on to our next destination in Kyushu.