It took me a while (many, many years!!) to get round to going to this hotel in Nishi-Shinjuku but my wedding day on July 7th (a.k.a. Tanabata) seemed the perfect opportunity to dine out on the 52nd floor of this hotel in the New York Bar & Grill. Back in 2009, my friend Michael and I did a tour of ‘Lost In Translation‘ filming locations which did actually result in us entering the hotel and going up to the top floor but we had already eaten elsewhere so didn’t dare poke our heads in to see what it was really like.

On a day of four taxi rides (more than I’ve done in all my years in Japan!) we left the Shinjuku City Hall, where we signed our marriage papers, and drove on to the Park Hyatt in the rain where a couple of elevator rides took us up to our intended destination. We were taken over to our window seats and given the lunch menu’s which I was already familiar with having checked them in advance.

It’s a set price of 5000 yen for lunch including a salad and dessert buffet bar on the very table where Bill Murray met Scarlett Johansson in ‘Lost In Tranlsation‘ (2003). It also featured in ‘Anthony Bourdain: Parts Unknown‘ (S02E07) on CNN last year and by coincidence those two entries constantly deliver the big ratings hits on Tokyo Fox! 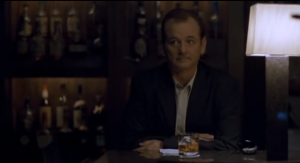 The lunch menu includes a choice of one of the following; grilled Australian beef sirloin, grilled seasonal fish, seared chicken breast, grilled Australian lamb, braised kirishima pork belly, penne regatta gragnano. All of these dishes are naturally given far more glamorous names for I have just written down the basics here. 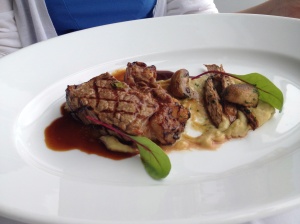 Please note that the 5000 yen quoted does not include the 13% service charge meaning that it is actually 6,179 yen per person and with drinks added on top of that, the price can soon get out of control! For the record, one beer of Asahi draft was 1188 yen but maybe a blog entry about one’s wedding day is not really the place to be moaning about money!! 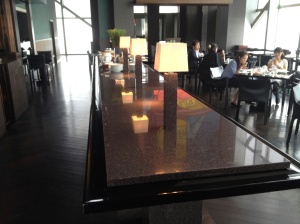 Once we’d finished our main course we changed seats (seemingly the norm) and moved on over to the lounge area to enjoy the dessert buffet amid a different setting and view. This was really awesome and there were so many ice-creams, cheese cakes, cookies and other such delicious sugary delights on offer which I’d love to have sampled more of but having been on a fairly strict diet for six weeks prior to this my stomach couldn’t handle as much as in the past. 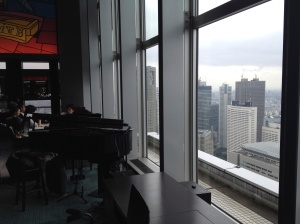 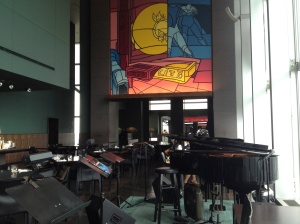 A short while later, one of the waiters brought a special congratulations (or “Congratulation” in their case!) ice cream dessert over with sparklers and candles which we then blew out. I had actually forgotten about this but when I booked the table in advance (which is necessary if you want a window seat) I did mention that we were going there after getting married so that was a nice extra touch to proceedings. 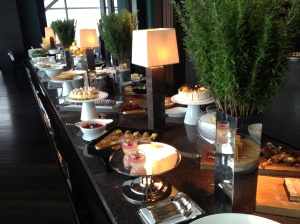 We were both overly impressed with this place. The salad and dessert bar would probably justify the price on its own so to have a delicious main on top of that was good value too. The New York Bar & Grill is a great place for that special occasion, film location buffs or just for anyone wanting to treat themselves to some fine food on a dramatic perch complete with stunning views of the city.