Scotland voting no to independence has been the big story of the day and thanks to Andy Murray’s tweet yesterday in support of his country going it alone, tennis was in the news albeit not for anything to with the actual playing side of it. My major worry of this whole Scottish referendum was the threat that Murray may no longer be representing Great Britain so I was just thankful, as I set out for my annual Toray Pan Pacific day out, that he’s still on side as England and Wales aren’t exactly flooded with talent!

Like Murray, Japan’s Kei Nishikori is seemingly the sole competitor for his country (yes I know Kimiko Date-Klumm is out there too, and she’s been an amazing pro, but she can’t go on forever try as she might!) and having very recently reached the U.S. Open Final you would think that the sport of tennis would be at an all-time high. You probably wouldn’t know it though based on the crowds at Ariake Collosseum in Tokyo for this tournament. Maybe that’ll change when the Rakuten Open men’s tournament gets under way here in a couple of weeks time when Nishikori will compete. Anyway, that’s my annual swipe at the poor crowds in Japan’s capital out of the way for this year! 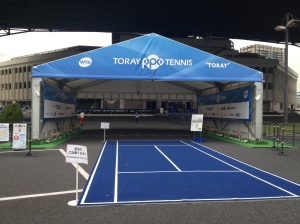 This was my fourth time to attend the Toray Pan Pacific Open but there was a slight change in scheduling this year which meant that Friday was quarter final day rather than the semi’s. This meant that I could have actually gone to the final on Sunday (21st) but the quarter finals seemed like better value for money as it was a bit cheaper (3000 yen) and the chance to see a greater number of singles matches was more appealing as this is not exactly the most prestigious of tournaments!

I decided to skip the opening doubles match and the majority of the first quarter final between Dellacqua (AUS) and Muguruza (ESP). I caught the end of this fiercely contested match with the latter triumphing by two sets to one 6-3 6-7 6-3. I would’ve seen even more of the match had I not stopped outside to see an on-stage interview with 5-time Grand Slam winner Martina Hingis (along with her doubles partner) which was a nice bonus for the day. 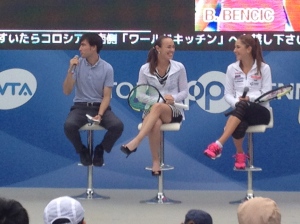 First up for me on court was recent U.S Open ladies finalist and number two seed Caroline Wozniacki (DEN) who won this tournament in 2010 and could well be on course to win it again having defeated 8th seed Suarez Navorro (ESP) 6-3 6-3. 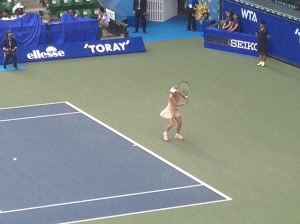 Top seed Angelique Kerber of Germany didn’t take too long to despatch Slovakia’s Cibulkova (whose serve involves a strange sounding grunt!) in the third singles game of the day but I felt the 6-3 6-0 rout was a little flattering. 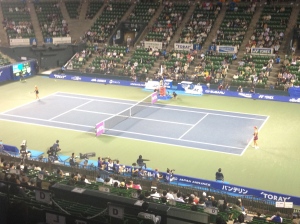 The final tie of the day followed on and involved the 2008 French Open champion Ana Ivanovic of Serbia who I had never seen play live before. Her opponent was 7th seed Safarova (CZE) who she made hard work of finishing off in the first set having initially raced into a 5-0 lead. She eventually regained control and won in straight sets 6-3 6-2. 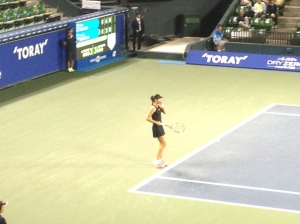 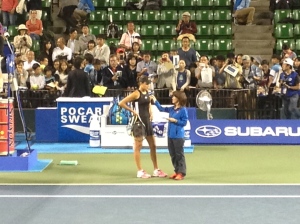