When this Richard Curtis-written film came out in 1994 I had no interest in seeing it whatsoever as I was really sick of hearing the Wet Wet Wet cover of ‘Love Is All Around‘ which was the soundtrack song that dominated the UK Top 40 chart spending a ridiculous 15 weeks at number one.

Many, many years later though and having been won round by Hugh Grant’s performances in ‘Notting Hill‘ (1999), ‘About A Boy‘ (2002) and ‘Love Actually‘ (2004) I finally got round to watching this one and enjoyed it enough to bother seeking out some of the London movie locations from it….not that that kind of thing usually stops me!!

22 Highbury Terrace (below) in North London first appears on 33 minutes as Charles (Hugh Grant) leaves his place in a rush to make it to the second wedding. This is the only time when we see the outside of the house from afar as when it appears at the climax of the film on 106 minutes we only see the door up close and the street and its neighbouring houses. Drayton Park is the nearest station and Holloway Road or Arsenal (both on the Piccadilly Line) are the closest tube stations.

Rowan Atkinson is the master of ceremonies for the second wedding, between Bernard and Lydia, which takes place around the 34 minute mark with ‘St Mary of the Fields in Cripplegate’ actually being the Royal Naval College Chapel. Greenwich is the nearest rail station and the chapel (below) is open to the public and free. It also featured as the interior of a ‘Venice’ church in ‘Lara Croft Tomb Raider‘ (2001) and a fair few other films which are arguably of greater note!

The reception for that wedding was shot at Luton Hoo Hotel, Golf and Spa which seems to have been used in some way in many recent locations updates on Tokyo Fox such as ‘Eyes Wide Shut‘ (1999) and ‘The World Is Not Enough‘ (1999).

Carrie (Andie MacDowell) gives Charles a show of her potential wedding dresses on 58 minutes at 1 Sloane Square (below) which used to be Albrissi, an interior design service. 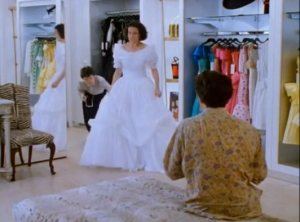 The fourth wedding of the film on 89 minutes at ‘St Julian’s’ is actually St Bartholomew the Great in Smithfield. Farringdon or Barbican on the Circle Line are the tube stations within walking distance and it’s this church where Charles has his doubts about getting married having met Carrie who informed him that she had separated from her husband.