There’s been a fair few sporting posts on Tokyo Fox recently and here is yet another one but this should be the last for a while! For the third consecutive weekend, and just two days after watching the Toray PPO tennis in Ariake, I decided to check another football ground off the list of relatively-close-to-home stadiums.

As a Leicester City fan, I’ve been no stranger to watching second tier football over the years though that’s thankfully changed in recent seasons. I’m not sure what the English equivalent of J2 would be but probably around the fourth tier. Who knows?!! For my seventh different stadium this season I dropped down to Japan’s second league and Omiya up in Saitama was my port of call. I met up with my friend Jack at Kita-Omiya station and walked on in the rare basking sunshine to Omiya Park; a vast area holding Hikawa Shrine, a zoo, a playground, a museum, a baseball stadium and also home to the Nack5 Stadium where the home team Omiya Ardija play their games.

This was not my first J2 league game as Ethan and I went to the Sapporo Dome in June to watch Consadole Sapporo draw 1-1 with Oita Trinita. That was in a massive stadium built for World Cup 2002 but this one was a more traditional four-stand rectangular ground similar to the Hitachi Stadium; the home ground of Kashiwa Reysol who I casually support. Nack5 has a capacity of 15,000 with the attendance of this match against JEF United from Chiba being 12,029.

Our match tickets were purchased for 2700 yen and on our way in we were handed a free towel/scarf thing which we were both very happy about. They actually cost 1500 yen so this extra was a nice bonus. Sadly we couldn’t get a seat for the game as all the seats were already gone by the time we entered one hour prior to kick off. Being a safe country is of course a positive but it does have its downside as it means people leave their possessions on the seats to reserve them. This is most definitely the equivalent of the Germans leaving their towels on the sun loungers by the hotel pool!

Furthermore, people like to spread out and put their possessions on the seats next to them which means you can’t tell whether its reserved for someone or not and the only way to find out is through confrontation! As a result we stood in the back corner of the terrace which was fine and quite nice for me as it’s been a long time since I got to stand up (legitimately!) at a football match.

The home team was introduced using the theme tune of my favourite ever show; ‘The A-Team‘, and what a tune it is! I never get tired of hearing it and loved this part of the pre-match razzmatazz. 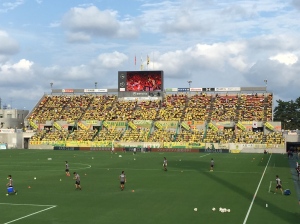 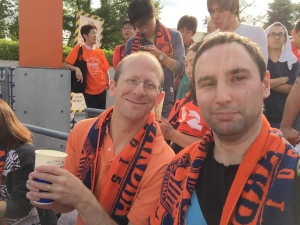 Minutes later the teams entered the field and at the moment a huge flag was unfurled and passed over us so we couldn’t see anything. It may look great on TV but it’s not so great when you’re under it! A FIFA Fair Play speech was then read out by the captains and with JEF United’s being a foreigner it caused quite a few double takes. I half expected to hear the crowd all say “nihongo jozu” (you speak good Japanese) afterwards as they often do when any foreigner says one or two simple words in their language.

The match kicked off at 4pm and it was quite an exciting half with action at both ends but eventually Serbian Dragan Mrđa put Ardija ahead on 34 minutes as he finished off a well-worked move. 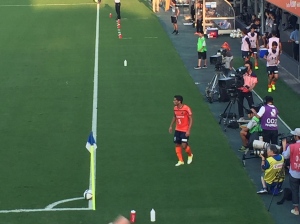 It was 1-0 at half time and it didn’t take too long after the break for midfielder Takuya Wada to increase Ardija’s lead when he prodded home a rebounded effort on 50 minutes.

With a two goal advantage league leaders Omiya took their foot off the gas after that and subsequently it was pretty much all JEF United as they dominated the stats with more possession, corners and shots. They finally got their reward on 88 minutes (a very popular time to see goals in the matches I’ve been to this year!) when Ado Onaiu pulled one back but it was too little too late. 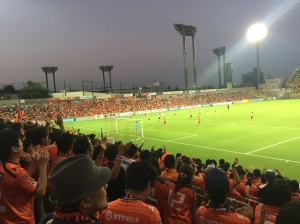