The San Diego Comic-Con has been going since 1970 and has inspired many other similar events and Tokyo appears to be getting in on the act with this convention which was organized by Apple co-founder Steve Wozniak who was in town recently to announce ComicCon 2016 which will be the inaugural event.

It seems that this particular ComicCon was something of a trial and a launchpad for next years which is quite a step up in size as it’s taking place at Makuhari Messe convention centre in Chiba which actually played host to ‘Star Wars Celebration Japan‘ in July 2008. It has also hosted many other annual events like Tokyo Motor Show, Tokyo Game Show and the Summer Sonic music festivals.

On the weekend of December 5-6, Tokyo Fox was in attendance at InterCity Hall in Shinagawa. The place was easy enough to locate but finding the actual rooms was difficult as there was pretty much nothing in the way of signage or posters advertising the event. There were a handful of stalls in the main hall selling merchandise and overall it was probably a bit smaller than the HollyCon 5 ‘Back To The Future‘ event I attended back in late August. 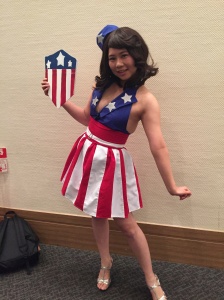 A day or two before, I decided that I’d take my X-wing pilot costume with me to change into if I saw fit and once I’d had my pictures taken with the two main stars I ventured in to the designated cosplayers changing room. Cosplay is serious business in Japan and I was quite surprised to see other participants arriving with suitcases containing their costume or indeed their costumes as some had two for the day! 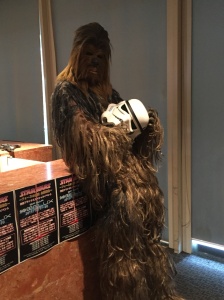 There were too many costumes to list here and I took loads of photos; way too many for all to feature in this post. One really has to appreciate the effort that goes into these costumes as most of them were made from scratch as opposed to mine which was just purchased off the net ready for Halloween 2014. One couple even asked me if I was Poe  Dameron from the new movie which took me back a bit as I wasn’t used to hearing the names of these new characters. I said that his X-wing outfit is more red whereas mine is the orange one worn by Wedge Antilles, Biggs Darklighter and of course Luke Skywalker. 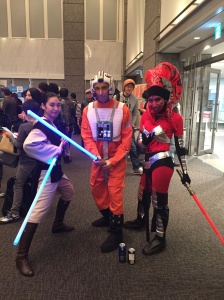 As I first entered the fray I engaged in a simple lightsaber duel with the Emperor whilst a load of people snapped away with their cameras. I had no idea what I was doing really and was a little uncomfortable at first but eventually grew into the role a bit more as time moved on.

In one corner of the room was a Star Wars battle pod simulation game (above) and there was a bar at the rear with Darth Maul and Boba Fett bust’s (below) on it. That sold all your usual drinks as well as some special ones for 700 yen named after characters like Palpatine, Darth Maul, Jedi, Sith, Kylo Ren, Luke and BB8.

Another hall was used for the photo and signing sessions with the two special guest stars; Ian McDiarmid (Palpatine) and Ray Park (Darth Maul). At around 1pm that area was open for everyone to see a display by Tokyo Saber Guild; a group performing lightsaber fight choreography with a lot of spinning and twirling.

After a few minutes another guy walked on stage to gasps and claps. I had no idea who he was but enquired later and found out it was Dante Carver who is very famous in Japan due to his appearances in the ongoing Softbank mobile phone adverts as well as modelling and other acting work. Ray Park joined them all on stage at the end to congratulate them and engage in some stage combat.

A small stage was situated in the middle of the stalls which the special guests appeared on for short speeches. Darth Maul (a.k.a. Doctor Emmett-Brown from HollyCon 5!) also popped up on stage and gave a lightsaber performance and informed the crowd of his background and so on and Dante Carver briefly joined him too for a clash of lightsabers. 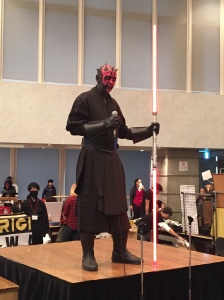 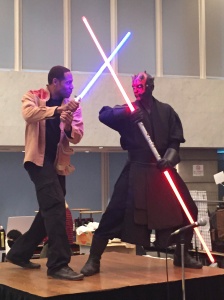 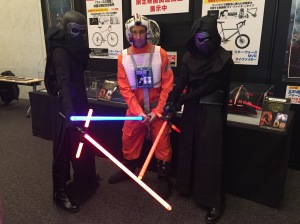 I met many wonderful people, made some useful contacts and even gained a few friends at what was basically a cosplay event with a few extra things thrown in. Those extra’s included the two special guests as well as Darth Maul giving some speeches on the stage set in the middle of the stalls. The cosplaying was mostly fun but it can also be quite lonely at times as you are basically waiting around for people to ask you for a photo! 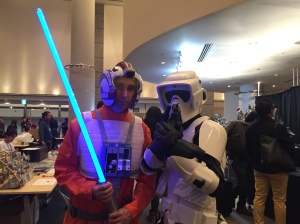 Before I knew about the idea of this years event, my initial impression was that with the right promotion and marketing it could have been so much bigger as this is Star Wars we’re talking about and quite frankly there could have been fans of the saga sitting in the Starbucks nearby who had no idea that such an event was happening right under their noses. As it was though, I was delighted to be part of a more intimate collection of people who were (mostly) brought together due their love of Star Wars and this event was a fantastic way of heightening the mood ahead of ‘The Force Awakens‘ which was released just under a fortnight later.

6 Responses to Cosplaying At Tokyo ComicCon 2015