Hiroshima-ken 2015/16 Pt I: Bringing In The New Year Japanese-Style

For the first time in a decade I saw in the New Year in my adapted country and whilst it may be lacking in the fun, excitement and jovial partying of other countries it was nice enough for a miserable git like me who has very little interest in celebrating such calendar dates. Instead, I was with a loving family eating lots of great food, consuming fine drinks whilst generally just sitting around and chilling amidst a few Japanese rituals.

In my absence from Japan at this time of year I have experienced NYE in the likes of Cambodia, Iceland, Hungary, Honduras, Thailand and of course the UK. I can’t say that any of them have been particularly amazing or anything as the date for me is synonymous with disappointing nights though I should say that I have never really put too much effort into them as I long gave up on it as everyone is chasing a good time and it just doesn’t work out like that.

At around 10:30 pm on New Years Eve we all ate toshikoshi soba and I was expecting to go to bed after that but surprisingly my mother-in-law and wife said we were going to a temple called Taikoji to bring, or rather ring in 2016!

None of us had been to Taikoji before and it was a bit of a weird place in some ways and very much a modern temple that supposedly makes a bit of money. At 11:45 pm people lined up to ring the bell (below) but as we had Momiji with us it was difficult to all go so I agreed to hold on to her (covering her ears from the noise) meaning that as the clock struck midnight I was on my own stood 50 metres back from the bell cuddling the dog! Given that I’ve had a knack of being in the toilet at midnight in past years I guess being with a cute dog was something of a level up! 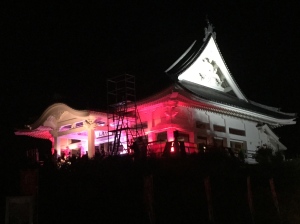 Over at the temple altar, there were even a few fireworks at midnight and some flashing lights which all seemed a bit bizarre for such a place of worship. Again, I was left with Momiji as my wife and mother-in-law then did something or another at the main hall. 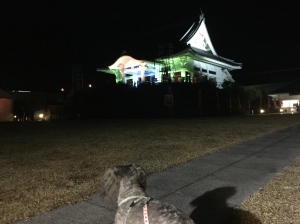 New Years Day breakfast (above) was followed by a walk to the local Shio-ya jinja shrine (below) for the custom that is known as hatsumode (symbolic first visit of the year) which pretty much every Japanese person does on January 1st or shortly after that. Before we headed to the altar we washed our hands and mouth at the temizuya (ritual cleansing basin) and then threw some money into the offering box, after which the bell is rung and that was followed by a series of bows and claps.

After all that, my wife and her parents bought an o-mikuji (random fortune paper) and that was basically that for the protocol. There was a line of people waiting by the time we left ten minutes after arriving ourselves. In the afternoon, I settled down in front of the TV to watch Gamba Osaka and Urawa Reds compete in the Emperors Cup Final which is Japan’s oldest football competition and dates back to 1921.

The food may be different but the Japanese New Year is quite similar to the British Christmas in that it’s spent mostly in the home with family eating and drinking. I’ve certainly shied away from spending the holiday season in Japan but am glad to report that it was all fine and we did enough stuff to give me ammunition for a few more Hiroshima-ken posts! 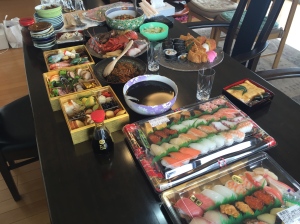 5 Responses to Hiroshima-ken 2015/16 Pt I: Bringing In The New Year Japanese-Style