Mention the words Middle East and many westerners may well have negative thoughts  but replace those words with Arabia instead and far more evocative and romantic images are likely to come to mind. Filming in the area known as the Arabian Peninsula has been fairly limited but the world’s richest country, the United Arab Emirates (UAE) has featured in recent times for a number of films.

The cities of Abu Dhabi and Dubai in the UAE have undergone substantial development over the last couple of decades. High rise ultra modern buildings have been popping up all over the place and nowhere was this more noticeable than in ‘Mission Impossible: Ghost Protocol‘ (2011); the fourth instalment in the Tom Cruise movie series based on the 1970s TV show.

The 829.8 metre high Burj Khalifa in Dubai is the worlds tallest man made stricture and it quite memorably featured in one of the most hell raising scenes as Ethan Hunt (Tom Cruise) finds himself climbing around outside using high-tech adhesive gloves in order to access and hack the building’s security systems. Tom Cruise even did his own stunts. 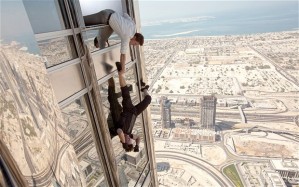 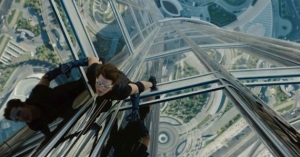 The desert city and it’s tall towers had a major part to play in ‘Fast & The Furious 7‘ (2015). The realism of the stunts in ‘Mission Impossible‘ were far removed in this storyline, where some of the most ridiculous and over the top action scenes were carried out amidst some full-on cartoon violence. Vin Diesel and the late Paul Walker drive between three towers with ease…whilst being high up in the sky! It has to be seen to be believed!

‘Star Wars Episode VII: The Force Awakens‘ (2015) was filmed in Abu Dhabi but can never be properly included here as it’s representing the fictional sand planet Jakku rather than itself. I couldn’t go without mentioning it though!

American chef/TV personality Anthony Bourdain has been lucky to travel much of the globe in the name of making food and travel programmes. He has featured in most of the “On Screen” posts thus far and this one is no different. Back in season six (episode 19) of ‘No Reservations‘ on Discovery Channel he filmed a show in Dubai and sampled some of the local highlights, including the indoor ski resort Ski Dubai. He also meets and eats with some of the locals, including young sheiks and foreign workers. 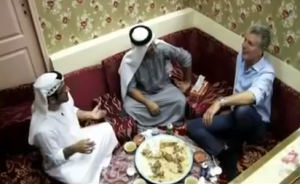 ‘Captain Phillips‘ (2013) starts off in Oman as Tom Hanks’ title character takes command of an unarmed container ship from the Port of Salalah with orders to sail through the Gulf of Aden to Mombasa in the African Great Lakes Region.

Jason Statham does what he does best in ‘Killer Elite‘ (2011) in his typecast hardman role as an early 1980’s mercenary who is summoned to Oman a year after retiring from the assassination game. His mentor Hunter (Robert De Niro) is being held captive there and Statham’s character Danny is introduced to Sheikh Amr, a deposed king of a small region of Oman who wants Danny to kill three former SAS troopers for killing his three eldest sons during the Dhofar Rebellion. The likes of Marrakech, Dubai and Jordan doubled up as Oman.

Hmmm, Bahrain eh! A very lame reference here but to my knowledge, the only time this country appears on screen is for its annual appearance in Sakhir on the Formula One circuit. Ever since 2004, when it became the first GP to be held in the Middle East, it has usually been among the first few races on the seasons calendar. On to the next country! 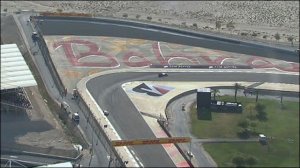 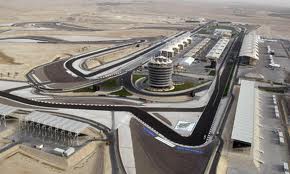 The biographical U.S. Marine war drama ‘Jarhead‘ (2005) is set in part in Saudi Arabia and Kuwait and is based on the Iraqi invasion of the latter in 1989. Jake Gyllenhaal stars as the main character Anthony Swofford and along with Jamie Foxx, Peter Sarsgaard and Chris Cooper they are deployed to the Saudi-Kuwaiti border. In reality it was all filmed in the USA with California, New Mexico and Arizona states providing the desert backdrop.

George Clooney, Mark Wahlberg and Ice Cube star in ‘Three Kings‘ (1995) which was filmed in the deserts of Casa Grande in Arizona along with other places in that same state. California and Mexico were also used to portray Kuwait where many of the extras were played by actual Iraqi refugees.

As the opening credits roll on TV movie ‘The Heroes Of Desert Storm‘ (1991) it’s August 2nd, 1990 and a long succession of tanks and trucks drive towards and over the TV screen in a style very reminiscent of the 1980’s American TV show ‘The A-Team‘. California filled in for Kuwait.

‘Uncle Sam‘ (1996) is another film to just include a smattering of Middle-East action. It starts off in Kuwait on June 14th as a military unit uncovers an American helicopter recently downed by friendly fire. As they’re inspecting the wreckage, Master Sergeant Sam Harper, one of the burnt bodies within, springs to life and kills a sergeant and a major, and returns to an inert state after muttering, “Don’t be afraid, it’s only friendly fire!” This nighttime scene could of course been shot anywhere but it was done in California….not that such vagueness is too useful for pinpointing the location!

The white sand desert in ‘Transformers‘ (2007), where the Decepticon known as Blackout attacks a U.S. military base in Qatar to find the location of Megatron and the AllSpark, is the 275 square mile White Sands National Monument lying southwest of Alamogordo in New Mexico. It is the largest gypsum dune field in the world and as Captain Lennox tries to contact the Pentagon during the fight he yells to a phone operator that he’s in the middle of a war-zone and that it’s frigging ridiculous although the words don’t exactly match his lip movements!

The Ridley Scott directed ‘Body Of Lies‘ (2008) starring Leonardo DiCaprio and Russell Crowe was a film I was looking forward to but ultimately disappointed by. It was originally going to be shot in the UAE but authorities in Dubai refused permission to film there due to the political themes within the script. Instead, filming was mostly done in the USA and perennial favourite Morocco. The film’s photography sought to emphasize the contrast between the gold and dust of the desert and Arab cities. 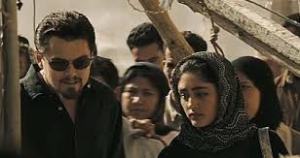 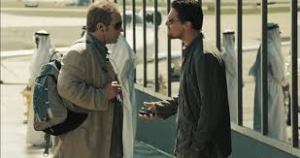 In the film adaptation of the Nicholas Sparks novel ‘Dear John‘ (2010), Channing Tatum plays a special forces ranger with a long distance relationship that gets tested. Trying to mend his broken heart over Savannah, John takes part in many missions including the invasion of Iraq and the conflicts in Afghanistan. While waiting to receive orders on his unit’s next deployment at their regional operations base in Qatar, John is informed that he is being sent home for the first time in six years, because his father is dying.

Yemen has been suffering from civil war in recent years so it’s no surprise that international productions have gone nowhere near this most traditional of Islamic countries. Book-turned-movie ‘Salmon Fishing In The Yemen‘ (2011) used Ouarzazate in the Moroccan Atlas Mountains for the local scenes of this BBC-produced romantic comedy drama film which I have quite an affection for.

You can see previous On Screen articles by clicking on the links below:

2 Responses to On Screen #8 – Arabian Peninsula