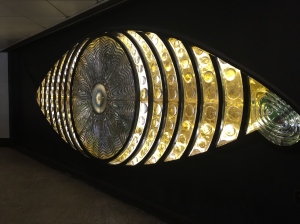 Shinjuku was revealed to be the the world’s busiest train station a few years back in a top 50 list that was pretty much monopolised by Japan. It’s not until the number 24 position that a non-Japanese station appears by way of Paris’ Gare du Nord! Of course it’s a little uncertain how the data was calculated and how accurate it is as India’s stations are not represented in the chart despite reportedly handling millions of passengers every day.

This place really is more than just a station and it is often included in lists of top attractions in Tokyo with so much to see and do beyond the train side of things. Though the “attraction” featured in this piece only takes a minute to see (not really sufficient enough to merit it’s inclusion under the usual Tokyo Daytripper banner!) it is worth a quick look if you find yourself on the west side of the station.

In the comments section of my ‘Music Videos Filmed In Japan‘ post, one lady mentioned the video for ‘#thatPOWER‘ by will.i.am (featuring Justin Bieber) which was a most welcome one for me as it featured a couple of places I had never even heard of; one was Reiyukai Shakaden temple and the other was a piece of art known as the ‘Eye of Shinjuku’.

Whilst the station sees more than one million commuters a day, very few of them even notice or even know about this wall of glass work which was created by Japanese sculptor Yoshiko Miyashita and has actually been in the station since 1969. 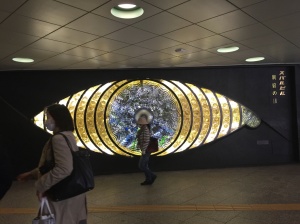 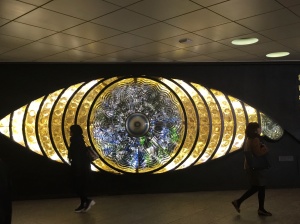 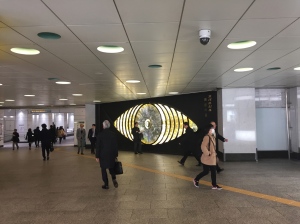 Despite being so eye-catching, all but a few tourists ever stop to pay attention to this fascinating piece of art. It can be quite hypnotizing to watch the pupils spin and trying to get a head-on shot of it without people in shot is near-on impossible due to the heavy volume of traffic passing by day and night. No doubt, like millions of others, I have walked right by it many times without even noticing it!

How to get there: Take the west exit of JR Shinjuku station and go straight ahead. Walk straight until you can see the outside. There should be a koban (police box) on your right and you basically just follow the path round in an anti-clockwise direction once you can see the sky. It’s a 2-3 minute walk from the west exit gates.