When catching up on the hours and hours of Star Wars Celebration footage on YouTube last year I was a little surprised to see a Japanese guy feature in the coverage from Anaheim in the USA. He was on one of the fan panels with a talent for carving all manner of Star Wars characters and starships from vegetables and he spoke pretty good English too!

His name is Oki and, following his Star Wars-related appearance, I did a bit of online stalking and made contact with him via Twitter. I often re-tweet his pictures and because of that we have messaged each other a little bit. Once I knew I was going to be in Osaka with my family in the Golden Week holiday season I got in touch with Oki and said I’d like to come with them for lunch or dinner at his restaurant one day if we had the time. In the end it was just my wife and I who made the journey to Owada station on the Keihan Line whilst my parents continued to look around Osaka-jo Castle park.

I wasn’t sure what to expect from his sushi place as I am used to going to kaiten-zushi (conveyor-belt sushi) places where the menu consists of many bastardised sushi options. Minayoshi (a.k.a. Oki’s Sushi Bistro) though is a real local and traditional sushi place and the type that I hadn’t encountered for many, many years. 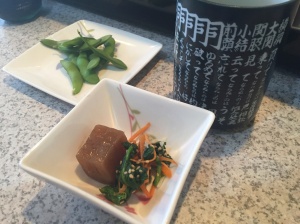 We didn’t even order anything but just let him and his mum (who he runs the place with) prepare a lunchtime course for us whilst we all chatted away. Red miso soup, edamame beans and konnyaku were followed by flatfish and kanpachi (greater amberjack). After that, we had the main sushi set (below) and shared the maki-zushi plate. Panna cotta with strawberries and caramel sauce for dessert rounded off a superb meal. 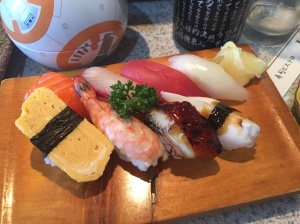 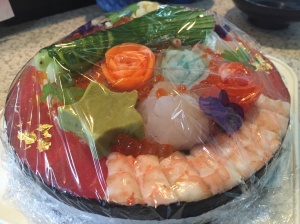 It was my wish to see some of his carving work and he didn’t disappoint. The sushi cake (above) features a turtle carved from a cucumber and he also had a sweet potato R2-D2 droid figure on hand to garnish our sushi plates and I was delighted when he said I could keep it if I wanted. I didn’t need to think about that for too long! The downside is that such a memento can only last for about two weeks when kept refrigerated and in a wet towel. However, I kept it for over a month as I was curious to see it turn colour and become so unbelievably mouldy. It really was a disgusting sight by the time I threw it out the other day!

Having kicked off the day very early morning on the special Star Wars Rapi:it line train the theme continued on Star Wars Day (“May the 4th be with you!”) with our visit to this family-run restaurant on the tight backstreets of Nozato-cho in Kadoma. The wall behind the counter seats displays some Star Wars-related patches fans in Japan have made for him and alongside them are some photos (below) from the Celebration events in the USA which Oki has taken part at including one picture with Anthony Daniels a.k.a. C3PO. 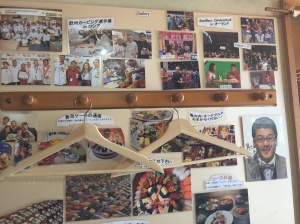 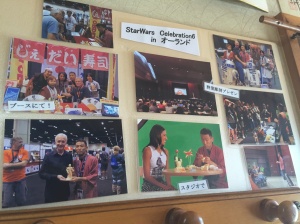 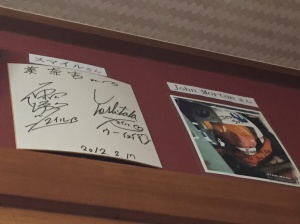 My wife and I left both very satisfied that we’d made the effort to travel a little out of the way to meet such nice, friendly, hospitable people. It was just a shame that we couldn’t chat more but, as is often the case on such trips, time was hanging over our heads and we had to get back to Shin-Osaka station to meet my parents ready to go on to Kobe for a J-League match on what was a fantastic but very, very busy day.

Click here for details of Oki’s restaurant in English and links to his English blog, Facebook page and cooking school for foreigners & tourists.

6 Responses to Dining Out: Minayoshi (Osaka)