The following article was written specifically for the Summer issue (#20) of J-Soccer magazine; Japan’s number one English language football publication. The editor chose the title for the piece and is rather fitting as the Japanese word shinjirarenai means unbelievable. 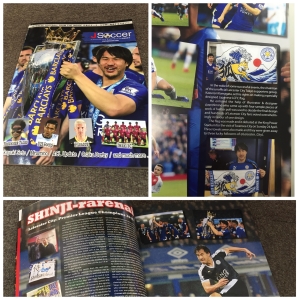 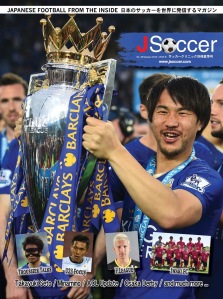 When Shinji Okazaki became the seventh Japanese player to grace the English Premier League since it’s inception in 1992 he surely can’t have believed he would join the other notable Shinji in picking up a winners medal. There was always a strong chance that Kagawa would win the Premier League with Manchester United, as he did during his first season in 2012, but no-one, absolutely no-one could have predicted the same for Okazaki. 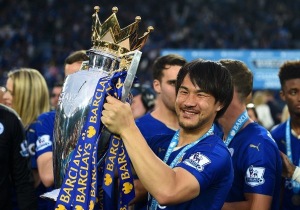 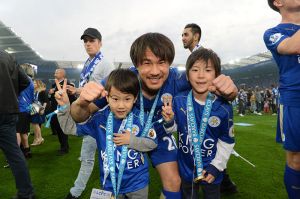 Just as Japanese fans were licking their lips at the prospect of Okazaki teaming up in the Bundasliga with the incoming Muto he was on his way out of Mainz and heading to a team in England which he’d been linked with at the start of January 2015. His new team Leicester City had been rooted to the bottom of the table only a few months earlier before seven wins from the last nine games saw them miraculously survive the dreaded drop but this greatest of escapes was just the start of an even bigger miracle. 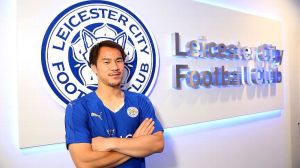 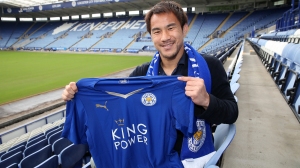 On making the switch from the mid-table German outfit for Leicester the ambition was to first survive and then possibly try and break into the top ten at best. He was signed at the end of June for £7m ($11m) but days later Nigel Pearson, the man he had signed for, was incredibly sacked. With hindsight, the absence of Pearson in the signing-day pictures was the writing on the wall and in came Claudio Ranieri; a guy labelled by the media as the tinker man.

Hyogo-born Okazaki started very well and impressed against Sunderland in the 2015-2016 season opener. He captured the hearts of fans for pressing opponents, tackling back, covering so much distance and setting up attacks. In the next match he got off the mark away at West Ham United which featured on the front pages of all the Japanese sports papers. His detractors did say it was typical of him to need two shots though! Indeed he needed a second bite of the cherry before finishing off his next two goals. 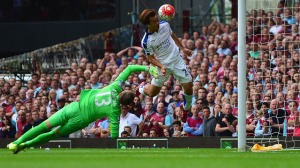 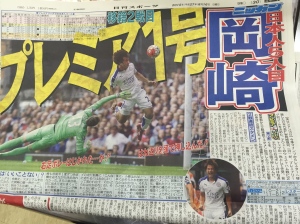 In this title-winning season he has pretty much sacrificed his game for the good of the team. On statistics alone, it’s fair to say that Okazaki’s numbers aren’t too impressive but that doesn’t paint the full picture. He may have only scored six goals (5 league and 1 cup) and not got any assists but much of his work goes unnoticed and, outside of Japan, he really is one of Leicester’s unsung heroes. He runs tirelessly pulling and dragging his markers out of position with decoy runs to allow the likes of teammates Riyad Mahrez and N’Golo Kante to advance forward or for Jamie Vardy to get in behind the defence.

Furthermore, he is fouled a lot thereby earning his team many free-kicks and setting up the chances of scoring from set-pieces. His greatest moment was undoubtedly the overhead kick winner against Newcastle United in March which propelled him to the top of the news headlines in Japan. The ex-Shimizu S-Pulse striker, who turned 30 in April,  has kept Leonardo Ulloa – the previous seasons top scorer – out of the team and a fringe player who tends to replace him as a substitute in the majority of the games around the 60-70 minute mark when Okazaki has run himself into the ground. Fact is that, of his 29 starts, he has only remained on the field for the full duration of a game three times. 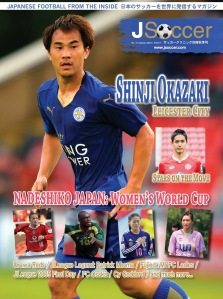 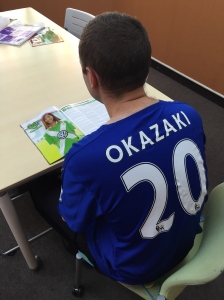 His fantastic goal against Afghanistan for the Samurai Blue in March was a sign of what he can do but has failed to do against Premier League opposition all too often. Former Foxes captain Matt Elliott was glowing in his praise of that goal but just wishes he could show similar composure in front of goal when playing for Leicester. “It’s the one area where he’s let himself down a little bit as he’s had a few half-opportunities like that and he’s rushed it and the touch hasn’t been quite what he wanted” says Elliott who has seen every Foxes game this season. 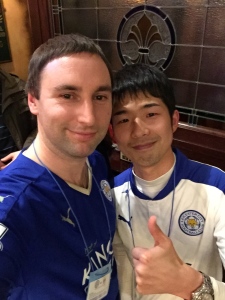 As one would expect, Kazunori Komagata; the chairman of the unofficial LCFC supporters club in Tokyo, is a fan of Okazaki. “He is a dedicated player who sometimes plays like a defensive midfielder and runs everywhere. His style creates many chances and goals albeit not directly” explains Komagata who goes on to say that “Although he can’t speak English well, his character and his smile are loved by the fans”. Indeed, after passing his English test in April, his manager Ranieri delightfully joked that he could now understand his directions and orders rather than just saying yes all the time.

At 174 cm he is shorter than both Kagawa and Honda and he also lives in the shadows of those guys regarding marketing and commercial appeal. Kagawa has won league titles with Borussia Dortmund and Manchester United, Honda has won the league and cups whilst in Russia and Holland but surely they were bettered by the remarkable story of Leicester City coming from nowhere to take the Premier League by storm this season.

With the added Champions League group games next season and the extra money in the club coffers, it could mean a slightly reduced role for Okazaki as Ranieri has already been linked with a few more prolific high-profile European strikers. Whatever happens next there’s no doubt that the never-say-die Samurai guy has played his part in Leicester’s rise to fame this season as part of a very settled side that was rarely tinkered with.

JSoccer magazine is available in print or as a Pay-What-You-Want PDF from jsoccer.com