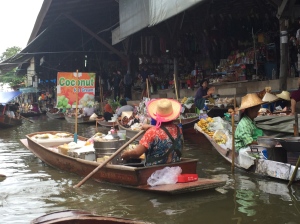 Despite having visited Bangkok three times before this trip I had still never visited any of the floating markets lying within an hour or two of the capital city. These markets have always looked so cool when I’ve seen wonderful pictures of them in magazines or clips on TV and, even though I knew the images of all the boat vendors selling a variety of goods  were probably a bit dated, I was still keen to see the current state of the market.

As a result, we booked on to a tour for our final day in Thailand and were picked up just after 7am whereby we picked up a few more passengers before eventually getting on to the main road out of Bangkok. We arrived just after 9am having taken a high-speed boat down a few canals (below) to reach the main area. This was great fun albeit fairly unnecessary as our tour guide didn’t ride with us but was already waiting at our destination! Still, it was a nice way to enter the floating market. 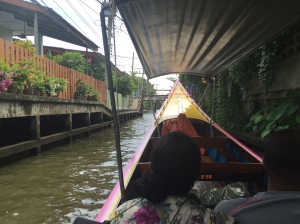 Damnoen Saduak Floating Market actually runs from 5am and finishes at noon. The tour package only included going to the market so we had to stump up another 150 baht or so for a 20-30 minute boat tour of the place which was actually very good. Not so good are my photographs which are all a little dark due to the lack of light getting through to the narrow waterways amidst the covered banks of stalls. 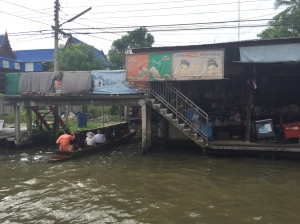 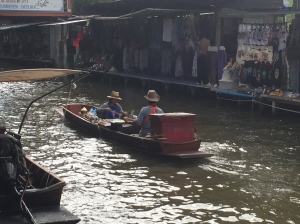 By the chance the floating market, which many of the tour companies go to, is actually the one which featured quite extensively in ‘The Man With The Golden Gun‘ (1974) starring Roger Moore as the 007 agent James Bond. 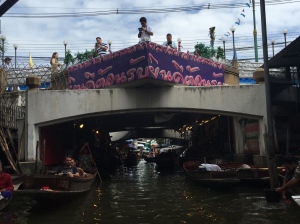 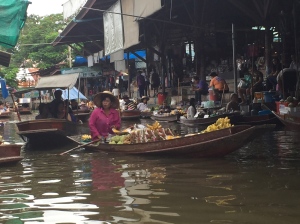 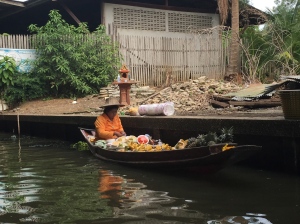 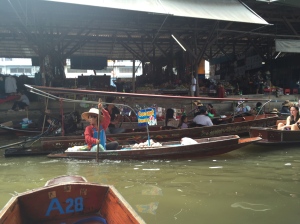 As expected the market wasn’t quite like those enduring images of the place, and instead was something of a tourist frenzy with dozens of boats packed with camera-endowed  tourists complete with selfie sticks! There were a few boat sellers though and, along with those hawking stuff next to the water, they made their money from tourists wanting to purchase all kinds of goods. Of course it was all a bit of a tourist trap but one that we still enjoyed. 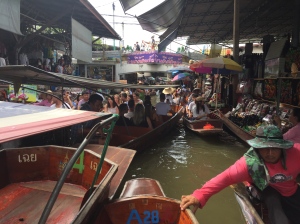 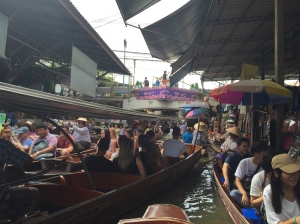 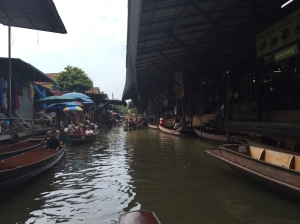 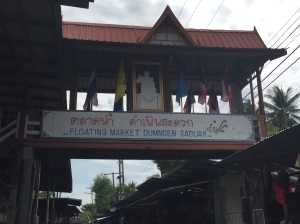 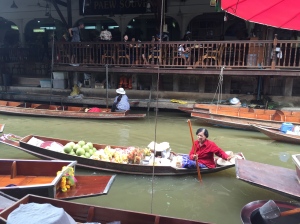 Having had no breakfast we were pretty starving after the boat trip so had a bowl of noodles by the river and it was only then, whilst watching the lady prepare our food, that I realised how much sugar is used in Thai cuisine. I had totally been unaware of that and was a little shocked!

Not far from the market was Chang Puak Camp which seemed to be your “all-in-one” place where you could experience many activities in a very short amount of time. 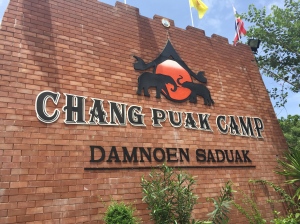 I guess the main attraction at this tourist hotspot is the elephant riding and bathing but other options include gun-firing, neck-ring wearing as well as paid-for photo opportunities galore with animals like crocodiles, monkeys, owls, snakes and elephants too.

Two new experiences for me as I fired off 30 bullets from a pistol (some even hit the target!) and then had my picture taken with an owl which was a far cheaper option than going to one of Tokyo’s owl cafes to basically do likewise.

Click on the links below to read other parts of this Thailand 2016 trip….