Ever since the Shinkansen (bullet train) route between Tokyo and Kanazawa opened last year, reducing the travel time from five hours to two, tourists have been descending on the city in their droves to eat the many local delicacies and see such places like Kenroku-en which, alongside Kairaku-en (Mito) and Koraku-en (Okayama), are the three most famous gardens in Japan. Sightseeing spots have never really been Bourdain’s forte and it’s no surprise that this particular one doesn’t feature here. 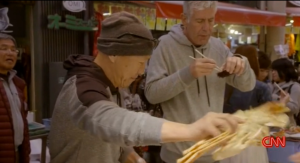 Season eight episode six of this CNN show is not exactly a typical guide to the capital city of Ishikawa prefecture but just sees the witty, sarcastic and profanity-using American chef/TV personality shadowing New York chef Masa Takayama as he returns to the area where he grew up. This is not the first time Bourdain has focused on just one chef as I seem to remember there being one about some Danish guy back in season two. 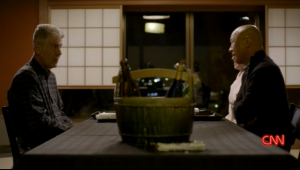 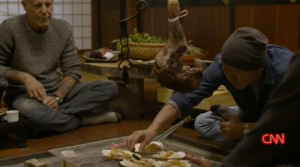 Masa is the owner of America’s most expensive restaurant where a single sitting can cost diners a minimum $600 per head! Kanazawa is known for its untouched-by-time traditional districts and was one of few places to not be damaged during the war. The city is also famed for crafts, beautiful ceramics and artistic sensibility as well as its sea food which they sample at a market early on in the type of scene anyone familiar with Bourdain’s TV work is more than used to seeing.

People like me, who have lived in Japan for a long time, are not the target audience for such programmes but I still learned plenty of new things and it really did drive home how so many things are often considered by the Japanese when it comes to preparing a menu. One of the places Bourdain went to changes it’s menu every few weeks in response to seasonal changes, product availability, when fish and meat are at their peak, presentation and even the ceramic dishes on which they are served. One of the most awesome looking courses was a tightly wrapped bamboo leave (sword-like in appearance) containing inside some sea-bream served over rice with a slightly sweetened sauce.

Don’t be fooled by the Kanazawa heading in this title. That’s just to keep things simple. The majority of this show is in Ishikawa prefecture but there is also a Ginza (Tokyo) segment. Ginza Sushiko is the name of the original 130 year old place where Masa learned his trade. Long training phases take apprentices through many stages where, after seven years, they can hopefully become a master sushi chef. Not all of the apprentices make it and it’s not until the third year that you even get to make the rice!

In his hometown we meet Masa’s daughter and mother for some home comforts which he just can’t get back in the States. Through Masa (and his family and friends) the viewer gets to experience traditional Japanese things like geiko, pottery, onsen and kendo whilst also learning about his background and what helped shape his own methodology. 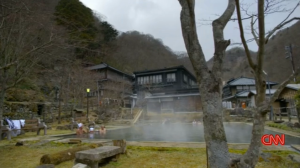 When this season’s destinations were announced I was pleasantly surprised to see that there would be yet another episode on Japan. Of course sushi and soba noodles are a part of this episode but it delves quite deep into Japanese culture to show off some other fine foods which are introduced on screen via the show’s fantastic trademark cinematography.