Cycling To Lake Tama And Back!

Many years ago whilst searching for cycling ideas in Tokyo and the surrounding area I came across this wonderful link which was about a bicycle ride one guy took around this area in Saitama prefecture. From that moment my heart was set on completing a similar ride one day but I thought it best to wait for either the cherry blossom or Autumn leave seasons which are both quite short windows of opportunity.

With a couple of days holiday at the end of last month the chance of doing this cycle ride was finally there and, a day after hiking up Mount Takao, I hopped on my bike and left the Tokyo Fox Global Operations Centre in Itabashi ward at 9am with written down notes of which roads to take to get there which I soon lost track of as I inadvertently was following the toll road. Of course bicycles are not allowed on that road which resulted in me trying to follow it as closely as possible but naturally thats not always doable.

My destination was actually a place I only went to back in April and at the end of the post about that visit I remarked that I would like to return in the Autumn to see the seasonal leaves. I also mentioned that I would have seen ‘My Neighbour Totoro‘ (1988) by the time I came back but there was no change on that one!

There is a cycle path called the Tamako Jitensha-do (“Lake Tama bike street”) which is a 22-km cycling track stretching from Nishi Tokyo City to the lake and around it. It follows an underground water pipe from central Tokyo to the Tama Lake reservoir but I chose not to take this as the experience of cycling the Kanda River taught me that these cycle paths are a bit of a hassle with barriers to weave through and roads to cross every 100 metres or so.

Beforehand I had allocated two hours to get to the lake, two hours to spend there and then another couple to get back…and that was rounding up heavily I thought as I hoped 90 minutes would be enough for each of the three phases. However, it wasn’t till 11:20 am that I arrived at the lake due to my poor navigational skills caused by wanting to use a physical map rather than using up precious battery on my phone maps app. My legs were already hurting a little by this stage and a runny nose along the way on top of that didn’t help my mood too much either! 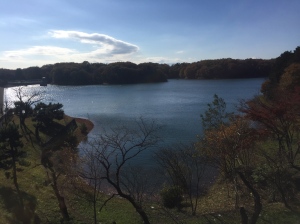 It was good to be back on a proper cycle path (first time since Omishima in August) but  nice as it was, it was also a bit annoying that the view along the way was always fenced off. 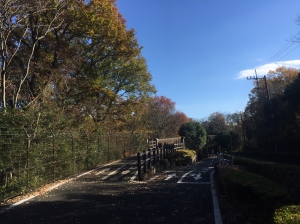 The Seibu Lions baseball stadium was passed early on and there was a picturesque shrine on the other side of road too but I decided to not investigate it further. 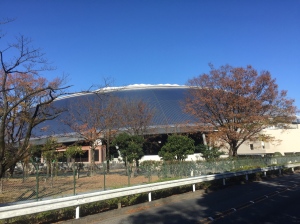 There were a couple of bridges along the way; a white suspension bridge and a red truss one.

As I was coming to the end of the loop I was surprised by the amount of battery I had left on my phone so began to wonder if the Runkeeper app was still running and sure as hell it wasn’t. It had stopped after just 40 minutes meaning that the last two hours had not been recorded. I was furious at this point and bleated out a few expletives into the beautiful Autumn foliage (below) as I angrily continued along the cycle path. 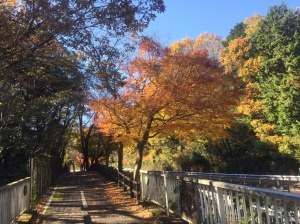 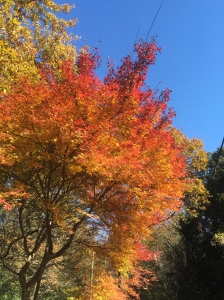 Having cycled round in an anti-clockwise direction I finished at Sayama Koen Park where I spent a lovely afternoon with my wife in April during the Cherry Blossom season. I took a short lunch and toilet break but the wind was starting to pick up a bit so I didn’t linger too much by the picturesque bridge. 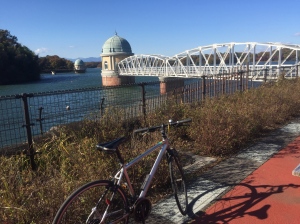 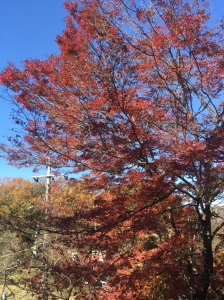 Lake Tama isn’t a conventional lake as it is an artificial one also known as Murayama Water Storage where the water is for drinking and the supply for Tokyo comes from here in some form or another. For that reason, you will see no activity on the lake such as fishing or swimming. The view across the lake was wonderful but sadly my pictures (below) don’t do it justice.

The architectural design rest area and the very deserted old-style family friendly Seibu-en Amusement Park were my final brief destinations but I wanted to get moving again. 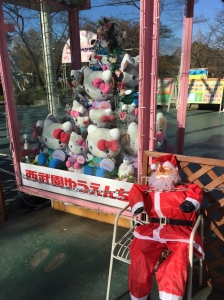 The original plan was always to leave Sayama Koen Park at 1pm and I stuck to that but this time took the more direct route home via Nishi Tokyo which was pretty much just one road and was without incident. This was my first cycling adventure in Tokyo since doing the Godzilla trail in July 2014 and when I arrived back at 3pm I felt absolutely shattered and sure that this would be my last long cycling adventure but weeks later and my attitude has changed so if I can come up with a new idea then I’ll be tempted to do it again.

2 Responses to Cycling To Lake Tama And Back!