A Temple Statue In Monzennakacho That Speaks To You! 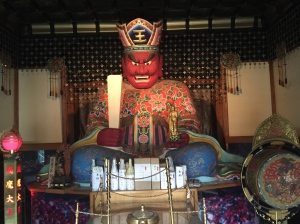 On the face of it, Hojo-in Temple seems like a fairly nondescript run-of-the-mill temple but there is an interesting feature lying within the place which is just a five minute walk from Monzen-Nakacho station on the Tozai Line or the Toei Oedo Line.

Inside one of the buildings sits a fearful (but slightly comical!) red-faced Enma Daio (a.k.a. King Yama) who is the Judge of the Underworld. He is supposedly the first entity which souls encounter after death as he determines the exact level of sinfulness and decide whether you’re going to heaven or hell! I first encountered him at the 15th and final destination on my ‘Cycling Tokyo’s Most Haunted Sights‘ adventure in 2012. Sadly I arrived at Taisoji Temple in Shinjuku too late in the day to see the big statue of Enma Daio. 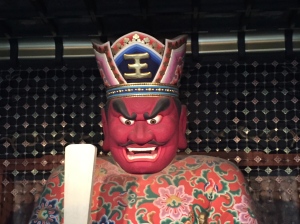 It actually took two attempts to see this large statue at Hojo-in Temple as the place was closed the first time I visited but I would not be denied and was determined to return sooner rather than later. Parents tell their kids that if they lie than Enma Daio will come and pull their tongue out which does sound a bit dark for a white-lie and one that could give some children nightmares! If it works though, then who am I to judge!

Rather than wait till the afterlife some people prefer to visit this temple to receive a sermon from Enma-sama as this 3.5 metre high statue actually speaks when you make a monetary offering in one of the many pots in front of you. His words of wisdom all seemed to be along the lines of “If you do or don’t do this, then this or that will or won’t happen!” 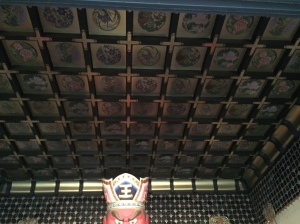 The main hall has 16 paintings of Paradise and Hell on the walls and it looks like there are just as many golden buddha statues on show too. Not all is as it seems though! The photographs below are just the work of the many mirrors in the place which reflect it in such a way to fool people who haven’t been to this temple.

Hojo-in Temple is located at 2-16-3 Fukugawa in Koto-ku and Kiyosumi Gardens are just ten minutes walk away from there. They once featured in a cooking segment on the ‘Hairy Bikers Asian Adventure‘ BBC TV series and are well worth the extra walk whilst in the vicinity.

Bonus: Also over in eastern Tokyo (albeit 7-8 kilometres further north) is another fairly unique temple. This one is a very different style to usual temples as part of it was designed to (supposedly) look like a rocket. 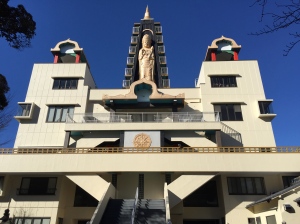 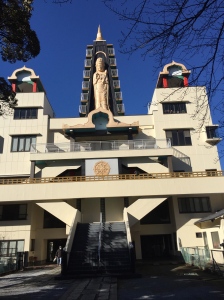 The address is 1-59-11 Minamisenju in Arakawa-ku and it is located just over 200 metres walk from Minowabashi; the last station on the Toden Arakawa Line. Minami-senju station on the Hibiya or Joban lines is only ten minutes away on foot.

1 Response to A Temple Statue In Monzennakacho That Speaks To You!