Dining Out: A Truly Novel Way Of Buying Food At Genbikei Gorge 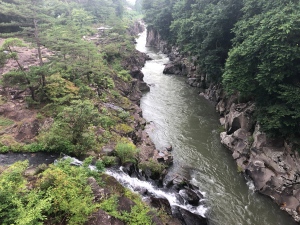 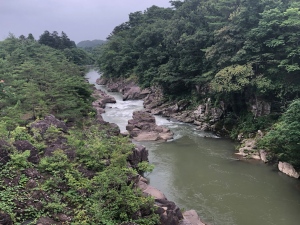 We tend to think of mistakes as bad things. Of course they are sometimes but naturally, we learn from them and in this case my silly error ultimately resulted in a very rewarding moment. This all happened at Genbikei Gorge which was the first place I went to on my arrival in the ancient city of Hiraizumi in Iwate prefecture that morning.

It is easy to confuse this gorge with the similarly-named Geibikei Gorge which is located close by and considered to be the more beautiful but is a bit more difficult to get to and seemingly looks very similar to Sandankyo in Hiroshima Prefecture. For me, Genbikei Gorge seemed like the more unique experience and it was also a much easier one as it was just an 18 minute drive from Hiraizumi Station.

It had started to rain lightly during the journey but by the time I had disembarked it was much harder. Just a few minutes walk from the bus stop was a rocky area of the gorge where a few people were congregated under a wooden gazebo-type thing. What was capturing their attention was not the beautiful views of the gorge but the wooden bowl zipping across the valley on a wire. Across the valley is a restaurant which is able to send dango (a Japanese sweet made from rice flour) to customers without them going anywhere near the bricks-and-mortar building! 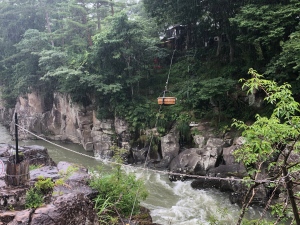 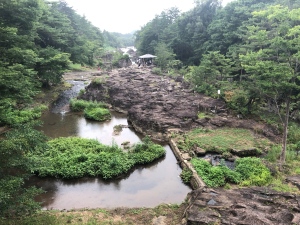 I can’t say I was too hungry but couldn’t resist such a way of ordering some Japanese sweets as is probably the case with most people buying it. Whoever came up with such an idea really needs to be praised for coming up with such a gimmick. I put my 400 yen in the basket within the bowl, used the hammer provided to hit a wooden target (the equivalent of ringing a bell at a reception desk!) to get the attention of the person across the valley and away it went. It was whisked across the other side of the water and about 90 seconds later my food was delivered together with three small cups of green tea and a note! 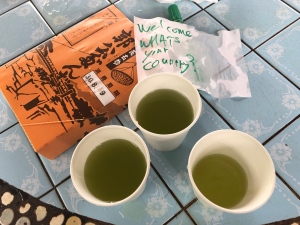 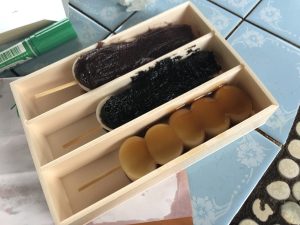 The message read “Welcome. What’s your country?” and a marker pen was provided for my answer. I replied with the word イギリス (Igirisu which is the silly Japanese katakana name for the UK rather than England which it looks and sounds more like) but stupidly I forgot to put the ten-ten (“) on the gi part meaning that it looked like イキリス (Ikirisu) instead. An amateur mistake but of course I knew he or she had understood what I meant as the British Union Jack flag was soon displayed across the gorge from outside the restaurant window whilst the British national anthem blasted out of the speakers. A British flag was also added to the basket as it brought the next order back down for someone else. 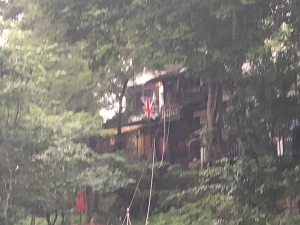 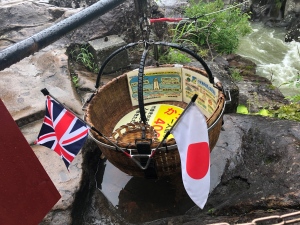 The second half of the video below shows that I later went to visit the person operating the zip-line. It turned out to be one guy and the operation of the wire was purely manual work. He got me to have a go at pulling the basket up from across the gorge which was good fun but would certainly be tiring if I had to repeat it every 2-3 minutes like he has to!

The mannequin up there may just be to fool people from across the gorge that there is a person there should he be taking a break of some sort. There is a gallery of customer photos (nearly all of them are young pretty Japanese females pictured with the main owner of the place!) and a TV monitor so the staff member can more clearly see the people (unbeknownst to them) ordering and alerting him that an order has been made. 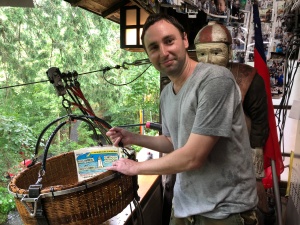 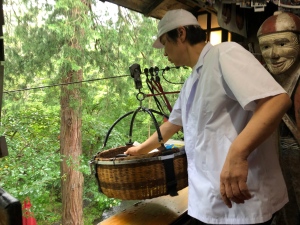 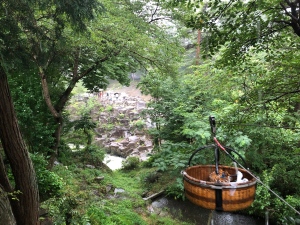 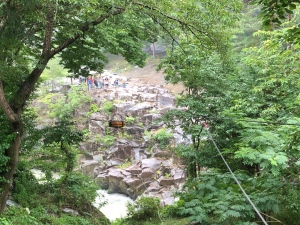 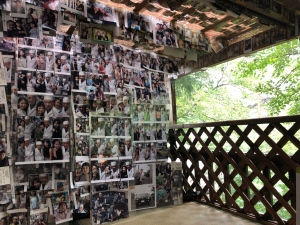 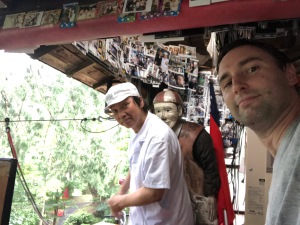 In between the two parts to the flying dango experience I had taken a short walk round the area but never went too far due to the rain which was absolutely hammering down as you can hear in the video! With a bit of time to kill till the next bus and at a bit of a loose end I thought I’d go round to the other side of the gorge to see the flying dango man and apologise for my mistake which as you’ve (hopefully) just read turned out to be a masterstroke of a decision. 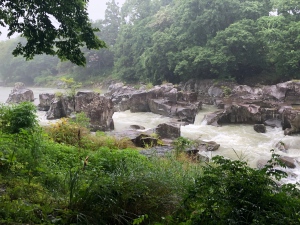 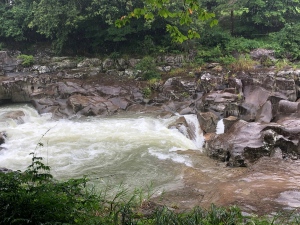 N.B. I should admit that as soon as I went on to the rocky part of the gorge I realised that I’d seen this place in a video by top Japan-based YouTuber ‘Abroad In Japan’ (Watch it here – Genbikei Gorge is 9 minutes in)

2 Responses to Dining Out: A Truly Novel Way Of Buying Food At Genbikei Gorge