One Of The Best Views From Any Station In Japan

There are many different types of densha otaku (train nerd) in Japan, and over the last year or two, having never had any interest in trains, I have come to realise that I am something of an eki-tetsu as I do like looking at station buildings but only if they are really unique so I’m not a full-blown train geek……yet!

The day began in Shizuoka city for my wife and I but whilst she headed back to Izu, I went to Nagoya for a couple of nights. I took a day trip to Gifu on day two but the first day was spent in Nagoya and one of the first places I visited on a baking hot afternoon was this station that’s north-east of the city.

Take the JR Chuo local line towards Tajimi (500 yen) for about 30 minutes and you’ll arrive at Jōkōji, an unmanned station, where I was the only passenger to disembark. With lots of green and clear blue skies, I was immediately impressed by the uniqueness of the place. 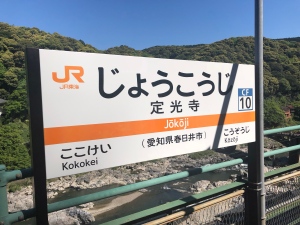 There are actually two fairly steep flights of stairs going down on the river-side of the station. 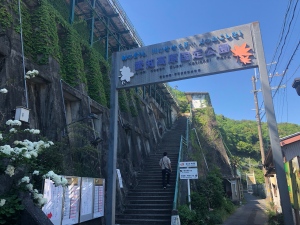 If you’re caught short then the good news is that there is a toilet just beyond the foot of the steps. It is very basic though with barely any protection should anyone happen to be walking by. This is actually quite common in Japan though where parks often don’t have doors on the toilets so anyone passing by has the unfortunate pleasure of seeing men stood there doing their business. 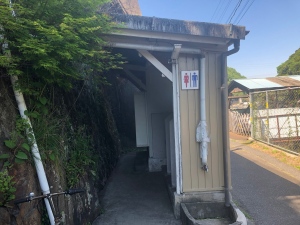 One of the best views of the station is from the bridge crossing the rocky Shonai River which is fringed by lush green vegetation. The station clings to the cliff that overlooks it.

On the other side of the bridge going back in the direction of Nagoya is a line of abandoned buildings which is something I’m always interested to see but sadly I couldn’t get too close as strict surveillance cameras are all over the ruins.

Just before those buildings is a signposted map of the area showing lots of hills and greenery. Tamanomitake Shrine is just beyond the derelict buildings but crossing the bridge in the opposite direction and continuing straight for about 15 minutes on foot will take you to Jokoji Park which is supposed to be very picturesque during the Autumn foliage season. I didn’t bother with the latter due to time constraints as the trains to the city only come once an hour and I had some other interesting places to see in the more central parts of Nagoya. 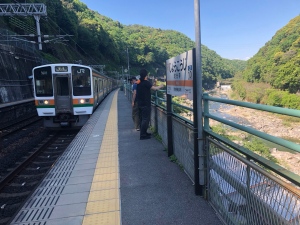