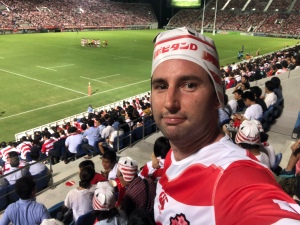 It was one of the biggest upsets in sporting history and helped propel rugby into the consciousness of a nation where the game had often just been a footnote on sports bulletins. I am of course talking about Japan’s incredible last gasp 34-32 win over the mighty South Africa in their opening match of the 2015 Rugby World Cup in England.

Yours truly watched the opening minutes of that game and saw Japan go 3-0 up and then tweeted something along the lines of enjoy this while it lasts as it’s gonna be a big defeat eventually. Ha! What a plonker and I woke up to quite a few replies the next morning making fun of me!

That was then though and this is now. I tried to get tickets for a couple of the Brave Blossoms’ games in the World Cup but ended up failing miserably on that front as I didn’t win in any of my applications including a special one for losers of previous ballots! I wouldn’t be denied though when it came to this warm-up match just two weeks before their opening game against Russia at Tokyo Stadium, more commonly known as Ajinomoto Stadium when sponsorship is allowed to be used.

Saitama Prefecture’s Kumagaya Stadium played host to Japan and South Africa last Friday (September 6th) for the first time since the Brighton miracle and I was lucky enough to be in attendance at a sold-out stadium. Kumagaya Station itself was full of rugby-related paraphernalia and one has to wonder how (or even if) other host cities will be decked out when the World Cup is underway. 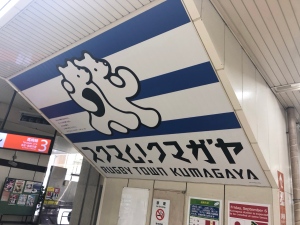 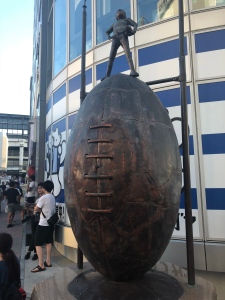 There were free shuttle buses to the stadium but not from directly outside the station. Instead we had to walk for about 15 minutes to a location just past the fan-zone which was also open and showing the game for free to those who couldn’t get a ticket. It will be open throughout the World Cup. 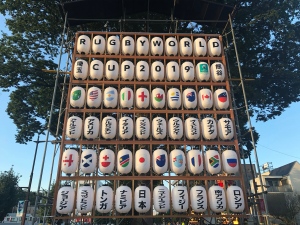 Kumagaya has caught attention in recent years for being the hottest place in all of Japan so no real surprise that it was a hot and humid night. The ground was completed in 1991 and, unlike many of the other World Cup stadiums, is principally used for rugby. It has been refurbished ahead of the forthcoming tournament and now has a capacity of 25,600. The three matches being played there in the World Cup are Russia vs Samoa, Georgia vs Uruguay and Argentina vs USA.

Japanese staff in blue shirts were waving to the passing buses every few hundred meters or so  along the route to the ground! How very Japanese! There was certainly no shortage of staff at the stadium either with the sole purpose for many of them just being to welcome supporters and give them a high five! To be honest, I do find it all a bit cringeworthy but it is the kind of thing that will no doubt endear them to fans and media from all the participating nations.

Security was tight getting in to the stadium with conditions the same as will be the case in the upcoming tournament. Covering a six-pack of beer beneath a sweater in your bag will not work for such matches sadly. For the record, it was 650 yen for a 350ml can of Heineken poured into a cup inside the stadium. 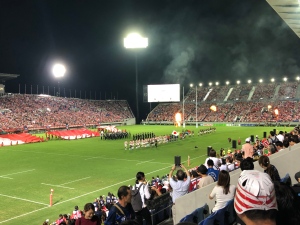 The place was awash with shiny new replica brave blossoms shirts and the free thunder sticks given out on entry. Warm applause was given to the opposition as the starting members were announced in English. The home team were of course cheered more loudly and then it was the national anthems with the South African one pretty much twice as long as Japan’s. It wouldn’t be a sporting occasion in the modern era without a quick blast of ‘I Gotta Feeling‘ by the Black Eyed Peas which immediately followed the anthems.

Japan began (and ended!) the match fairly badly and it was never really much of a contest as Kolbe scored the Springboks first try on eight minutes. That occurred after the home side lost their line-out deep in their own half and the next try also came about from sloppy Japan play. Mapimpi was left with the freedom of Saitama on the half hour mark as he raced in for his second try and the Southern hemisphere team went in 22-0 up at the break. 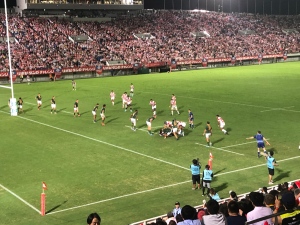 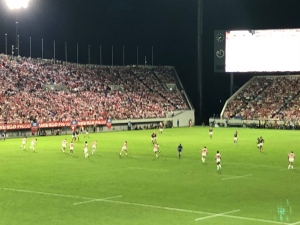 It wasn’t all bad for Japan though. There were even shades of 2015 again as the Brave Blossoms closed in on the Springboks try line a couple of times where captain Leitch again turned down the opportunities for kicking at goal and instead went for the try each time. It proved to be a masterstroke in the World Cup match but not this time as they failed to capitalise.

There was a breakthrough in the second half though as Kotaro Matsushima capitalised on a turnover and a great pass from Timothy Lafaele. For a few minutes I lived in hope for a fightback of sorts, and when the visitors were reduced to 14 men there was even more optimism. Japan closed in on the South African try line on the 72nd minute but a wayward pass from Tamura was intercepted by Kolbe who ran the length of the field unopposed to confirm victory. Another breakaway try was added late on to make it an even more emphatic win. 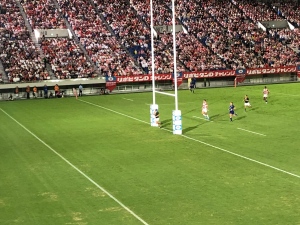 Japan should still have enough to see off Russia in their opening match in a fortnight but they can’t be so haphazard with their handling errors, kicking and back-line passing when up against better opponents like Ireland or even Scotland. South Africa will, as ever, be amongst the favourites to win their third World Cup and I am pleased that I will get to see them again in an actual tournament match.

Click here to read ‘日本 vs スコットランド (Japan vs Scotland)’

Click here to read ‘日本 vs サもア(Japan vs Samoa)’

A Leicester City fan teaching English in Japan
View all posts by tokyofox →
This entry was posted in Sport and tagged 6 September 2019, Japan vs South Africa 2019, Kotaro Matsushima, Kumagaya, Michael Leitch, Rugby World Cup matches in Kumagaya, things to do in Saitama. Bookmark the permalink.