The rise of rugby in Japan was huge towards the end of 2019 and it was expected to continue to grow in popularity as we entered 2020……but then Covid_19 came along and all momentum was completely lost. Not for everyone though!

When I heard that the Ireland women’s team would be in town on their first-ever summer tour, I was keen to attend the match in Tokyo despite having never even seen a women’s match on TV. Being able to just turn up and pay on the gate was a big plus point for me as Coronavirus often made it slightly difficult to go to Top League games (once they resumed) as tickets had to be purchased beforehand with all kinds of log ins and password creations necessary. Very troublesome indeed!

This was to be my first live rugby since going to the Ecopa Stadium in Shizuoka Prefecture during the 2019 Rugby World Cup (RWC). That stadium actually played host to the first test between the Sakura 15 and Ireland one week before this one. My wife even decided to join me but she had no idea until we got to the ground that it was a womens match.

By chance my last two lessons cancelled on the day so I was able to get to the Prince Chichibu Memorial Rugby Ground even earlier than expected. After purchasing two tickets (3000 yen each! They were 2000 in advance so paying on the door isn’t always the best idea but it does offer far more flexibility) we then went for some dinner at a nearby restaurant specialising in Thai/Nepalese/Indian food.

The RWC 2019 Japan shirts were hugely popular and sold by the truckload at the time, and many of those tops were worn at this match. There were a fair few Japanese people wearing Ireland shirts too which is hard to imagine happening in too many countries. My wife bagged my RWC 2015 shirt leaving me with very few options so I chose to wear the most Irish-looking Leicester Tigers top I had! 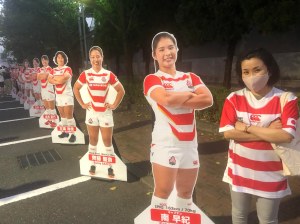 The Embassy of Ireland had a small stand inside the stadium promoting the Emerald Isle to the locals with some free pamphlets, travel brochures and stickers. I was quite surprised to see the maps had information about Skellig Michael which is perhaps my ultimate destination nowadays due to its appearance in the first two Star Wars sequel movies. 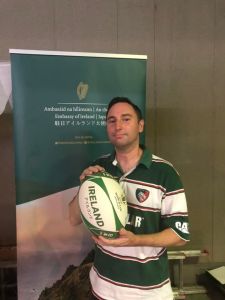 This actually wasn’t my wifes first rugby match at Chichibunomiya as we went to a Top League game there just before Christmas 2017. The temperature was obviously way hotter this time and indeed it was a rather sweaty and uncomfortable evening in Minato Ward as we took our seats about half an hour before the 7pm kick off.

The Japanese national anthem ‘Kimigayo‘ followed the Ireland one and it actually brought tears to my wife’s eyes. 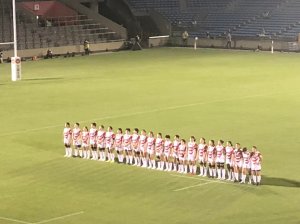 Having watched highlights of the first test between these sides in Shizuoka a week earlier I was expecting another big win for the Irish, and when they scored the opening try inside three minutes it looked like it might be a case of deja vu. An explosive start from the Irish at Chichibunomiya was actually very familiar as the same happened when I saw Japan play against Ireland in the men’s game back in 2005.

This time though Japan fought back through some driving mauls and eventually got their reward having got so close on a couple of occasions. The first half saw very little passing in the hot and humid conditions as the action failed to gain too much momentum with constant stoppages. Just before the break though Japan powered through to give the hosts a deserved half-time lead. 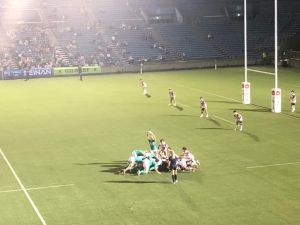 The start to the second half very much reminded me of when Japan played Scotland match in the last World Cup which saw the hosts blitz their way through the opposition scoring tries in quick succession to put the game out of reach barring a great comeback! On this occasion Hinano Nagura and the impressive full-back Rinka Matsuda got the stadium on its feet. I don’t think I’ve seen my wife ever get so excited about sport as when these tries were scored!

There was some brief respite for Ireland who got a try back just before the hour mark but Japan remained unflustered and scored a fifth and final try to ensure the two-Test series ended in a 1-1 draw.

As was the case when I went to my first womens football match, I soon forgot that I wasn’t watching the mens game. I was quite impressed by the attendance, the occasion and some of the rugby itself. With the women’s RWC coming up later this year in New Zealand I will now keep a much closer eye on something that I’ve been rather blind to thus far. Seeing Japan triumph here was a good way to start such a journey.

Click here to read ‘Time To Jump On The Women’s Football Bandwagon For A New Experience!’