With nostalgic memories of those classic comedies in mind, I was quite optimistic about this big screen Hollywood effort. The reality though is that it’s not exactly a laugh-out-loud 90 minutes but that’s not to say that it doesn’t have a charm of sorts. It came out just eight years after another film set in Japan with the word Joe in the title was released by way of ‘Tokyo Joe‘ (1949). However, the more common comparison would be the similarly-themed ‘Teahouse Of The August Moon‘ (1957) which was released about half a year before it. 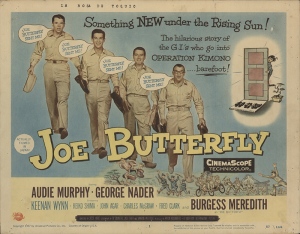 ‘Joe Butterfly‘ is a service comedy from an unproduced play that hasn’t aged well at all due to a white actor playing a major Asian role which was fairly common back then but certainly wouldn’t pass in the current climate. Marlon Brando in ‘Teahouse..’, Ricardo Montalban in ‘Sayonara‘ (1957) and Mickey Rooney in ‘Breakfast At Tiffany’s’ (1961) all did it and here it’s Burgess Meredith who plays the title role.

His character is a roguish but likeable black market operator who can get just about anything in a war ravaged Tokyo. He is reluctantly enlisted by the staff of the Army weekly magazine “Yank” and helps set them up in a palatial private mansion (as living and working quarters were at a premium at that time) where they can focus on meeting their short deadline of producing a magazine within three days or risk surrendering a confiscated printing plant to another magazine’s correspondent.

It’s not just any old mansion though as this one comes complete with beautiful girls which is strictly against regulations, and all kinds of hi-jinks develop in quick succession. This military journalism unit were among the first American troops in Tokyo after Japan’s surrender in WWII.

The casting of the title character may be the strangest one as we look back from a very different time period but at the time the more bizarre choice was having action star Audie Murphy in a comic role. It turned out to be his only outright comedic part and it was reported that he was extremely uncomfortable playing the role.

Murphy was actually a decorated WWII soldier who went on to play mostly tough guy roles in westerns movies of the post war era. This film stretched his acting skills and, despite what he said himself, he seems at ease in this role as the softly spoken, easygoing, naive Private John Woodley who has a subplot romance of sorts, and was supposedly admired by the Japanese cinema-goers at that time.

The movie was shot partly in Hong Kong, Tokyo and Yokohama with the latter providing exterior shots of the USS Los Angeles CA-135 cruiser ship. Notice that I’ve not mentioned much about the story just yet. Well that’s because, as much as the cast seemed to have fun making it, there’s really not such a deep plot. There’s some antics centred around the journalists, their superior Colonel Fuller, his personal assistant Sergeant Hulick, and the mysterious Tokyo Rose who other journalists want a scoop on.

The depiction of the Japanese in this film is also quite sympathetic and looks at them as human beings as was the case with the aforementioned ‘Teahouse…‘ and ‘Sayonara‘. It’s far from hilarious but if you can tolerate the YouTube video quality then it demands fairly minimal attention as it’s easy to follow a topic that’s usually only ever seen as being sinister-like but was supposedly part of life for U.S. troops in that era.