The Great Buddha Of……Ikebukuro?!! You Better Believe It (Because I Sure Didn’t At First!)

Everyone knows about the Great Buddha of Kamakura in Kanagawa Prefecture but who knew that there was such a thing much closer to home for those of us living in Tokyo! I didn’t, that’s for sure! And I like to think I have reasonably good knowledge of such things in and around Tokyo!

Thanks to a social media comment on my recent ‘TF Top 10……alternative big Buddha statues in Japan‘ post I found out about this one on a backstreet in Ikebukuro. To be honest, I thought it was a wind-up at first but after an online search it was proved to very much be for real.

Lying about ten minutes on foot east of Ikebukuro Station, near to Minami-Ikebukuro Park, is this temple but it’d be very easy to walk right past it without noticing it at all. From the outside it doesn’t look like a traditional place of worship as it’s an eight-storey concrete building construction on Theater Green Street. 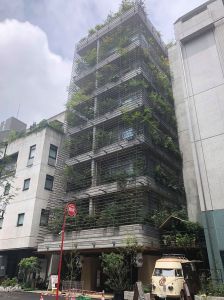 On entering Sengyōji Temple we poured some water on the head of the mini Buddha statue which my wife told me was for good luck. 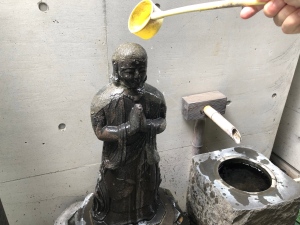 The great Buddha has a long and rich history dating all the way back to 2018! This local spiritual haven is located on the ground floor towards the rear of the building and is slightly hidden away behind a curtain.

Once we’d ducked under the curtain to enter the dark cave-like place we were met with the sight of a giant wood carved floating Buddha statue of 4.6 metres in height and weighing 1.5 tonnes.

It shines brightly in the soft natural light, and looks like it’s floating in the air, but (stop reading now if you don’t want the illusion ruined!) it is actually attached at the back. 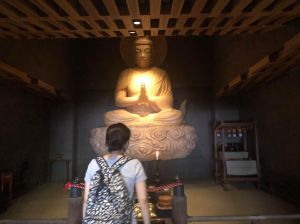 There’s very little on the internet about this floating buddha apart from this short two minute NHK World YouTube video which says that there are more than 5000 graves inside the building. Zoshigaya Cemetery is not so far away itself but it seems that like this is a more modern option for burial in central Tokyo where there’s a shortage of graveyards.

Bonus: Did you know that Japan’s third largest buddha statue is actually in Tokyo? If you’re an avid reader of Tokyo Fox then you would! This 12.5 metre tall bronze structure was erected in 1977 and is tucked away far from a station in the northern suburbs of Tokyo. More details here.

There are a couple of buddha statues close to Nippori Station in east Tokyo. Zenshoan (5-4 Yanaka, Taito-ku) is a temple with a sizeable cemetery and a gold Buddha statue watching over everything. 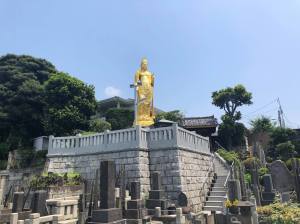 The other one is just a couple of minutes away from the south exit of the station. Tennō-ji Temple (7-14-8 Yanakain, Taito-ku) is home to a 400 year old bronze Buddha which was created in 1690.

Think of Ueno Park and images of a panda, lotus pond, cherry blossom or various museums probably come to mind but there is a kind of Great Buddha Hill (below) too which is well worth a look. Sadly, the closed-eyes face is all that remains of a huge Buddha statue (akin to the Great Buddha in Kamakura) which was destroyed in WWII. A black and white photograph placed next to it shows what it looked like prior to being melted before the war. The pagoda which houses the head was built in 1972.

Just over the border from Tokyo is this huge Buddha head (below) which I think is actually a factory that makes Buddha statues not that most people driving past it probably realise! They probably just wonder why there’s a huge Buddha head sitting by the roadside without any temple in sight! It’s a ten minute walk from Goko Station (Shin-Keisei Line) in Matsudo (Chiba Prefecture).

1 Response to The Great Buddha Of……Ikebukuro?!! You Better Believe It (Because I Sure Didn’t At First!)