Think of famous trees in Japan and many would probably come up with Jomonsugi on Yakushima island which possesses a giant cedar tree estimated to be 2000 to 7200 years old. That is said to be the oldest tree in Japan but getting to that subtropical island off the southern coast of Kyushu (as well as the 10 hour hiking round trip!) is not exactly easy. 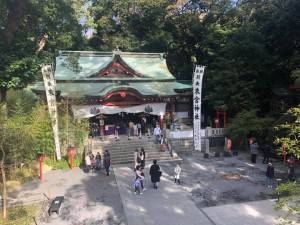 A far less difficult option is this taller, thinner one which is just five minutes on foot from Kinomiya Station, one stop south of Atami Station on the Izukyu Line in Shizuoka Prefecture. I have to admit that I had never heard of it until one of my students mentioned it a month or two ago. Always keen to find new places to visit on the east coast of the Izu Peninsula (where my parents-in-law have a house) I decided to stop off there en-route to Ito at the end of November last year.

The appearance of shrines may rarely change but that’s not to say that they don’t move with the times in other ways. As you can see in the two photos above this particular shrine has a heart made of leaves as well as a couple of tables and smartphone holders to allow people (especially solo visitors but of course also useful for couples or even groups) to get photos which they can then upload to social media and tag the shrine’s account in the process too.

Kinomiya Jinja Shrine’s sacred tree called “Okusu” (a giant camphor tree) isn’t as old as the aforementioned one on Yakushima but it is still over 2,000 years old and is also a natural designated monument. It can be found at the rear of the shrine and supposedly has a circumference of about 24 metres. It is 26 metres tall and it’s said that if you walk around the trunk your life expectancy will extend by a year. No, I’m not sure if multiple laps will result in numerous extra years in life! 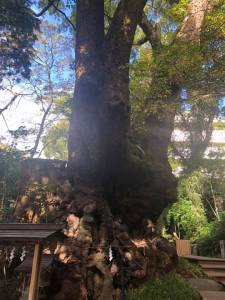 The tree’s longevity is the main attraction for many worshippers wanting to prolong their life, as well as recover from sickness, abstain from smoking and drinking, and also to pray for good health. That’s a lot of benefits!! The giant tree is endowed with powers to help people basically live a long and healthy life. Had she been with me, my wife would have lapped up all that spiritual stuff!

It should be said that the first notable tree one encounters on entry to the shrine is what is known as “the second Okusu” which is over 1,300 years old and managed to survive a lighting strike about 300 years ago. 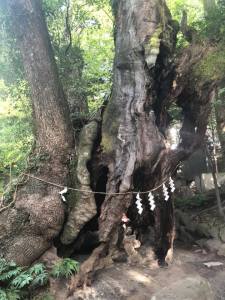 Just beyond that is this pretty impressive view of a carp-filled lake, a red bridge and a small shrine on top of a rock. 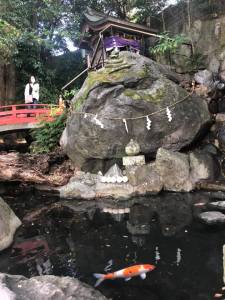 There are a couple of fox deities too.

Don’t forget about us!

There are approximately thirty minutes between trains on the Izukyuko Line which was just enough time for me to disembark, get to the shrine, look around and then return to the station for the next train.

By chance it was the Kurofune (Black Ship) train (a fairly luxurious train which can be used with just a local train ticket) which arrived and then took me down the coast to Ito Station where my wife and her parents were waiting to, unbeknownst to me, whisk me off to a few places.