The Station With A Great Sea-View In Yamaguchi Prefecture

There’s something alluring and slightly fairytale-like about a train travelling along a coastline next to the ocean and, as an island country, Japan has a fair few stations which are located beside the seaside. Many years ago I read an article about stations with sea-views in Japan and I remember this one featuring in it. I have written about a couple of others in the last 12 months such as Umi-Shibaura and Nebukawa (both in Kanagawa Prefecture) but this one is located about 850 kilometres west of the latter.

Getting to Ōbatake Station was a fairly simple and straightforward 80 minute ride along the JR Sanyo Line following the beautiful and serene coastal route from Hiroshima into Yamaguchi Prefecture.

Yamaguchi is one of the more rural areas of Japan possessing a geographic area of 6,112 km² and it is one of the more difficult prefectures to get round when relying solely on public transport. I’m lucky enough to have been on family trips to a few places in the area such as Akiyoshido Limestone Cave, Motonosumi Inari Shrine, Hagi and the phallic themed Mara-kannon Temple.

Thankfully, this station was a place I could easily do on my own, and to be fair none of my family in Japan would be interested in just visiting a station along the sea! Ōbatake is a staffed station consisting of two platforms with trains running in either direction between them.

The mix of blue sea and sky with beautiful green mountains sandwiched between them is a great combination.

When I left Hiroshima to travel west along the coast to this station I didn’t actually plan to leave the station but I changed my mind as I was hungry having left quite suddenly when I realised I’d be allowed out on my own again! This was on our last full day in Hiroshima for the New Year holiday and was a simple trip which wouldn’t take much effort but it did take over an hour each way as well as the 40 minutes I had in Ōbatake before the return train. 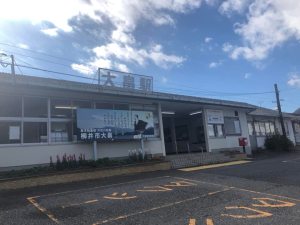 I thought it might be nice to wander down the road too to get a better view of Oshima  Bridge which crosses over the Seto Inland Sea to Yashiro Island. 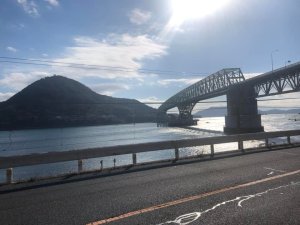 Bonus: I’d noticed there was a station called Yū on the way to Ōbatake so on the return journey I was ready with my camera to capture a shot which could provide a lot of hilarious captions such as “Can you guess who went to this station today?” and so on!! Stepping off a train for just a few seconds can be a dangerous game but thankfully my doors were close to the sign. I even managed to get one more shot through the window as the train pulled away. 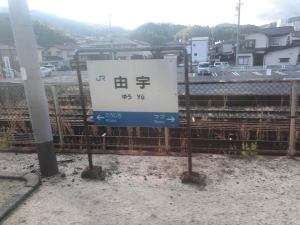 Click here to read ‘A Day In Yamaguchi Prefecture’