A Day In Yamaguchi Prefecture

The bordering prefecture of Hiroshima is a sizeable one covering a vast area consisting of some fine places that I have earmarked as future travel destinations. Without a car though some of them are very difficult to get to but not these ones although the first place was certainly further away than I originally anticipated.

On my arrival at Shinnan-yō station mid-morning I quickly glanced at the map outside the exit and promptly set out to locate my prime destination which was Kawasaki Kannon a.k.a. the breast temple. That quirky place was located at the top of some steep steps and as I looked out across the city there were some fine views including a park with a windmill in it so once I’d had enough of the mammaries I decided to venture on over to investigate. Eigenzan Park (below) is the name of the place and I took a leisurely stroll through it as I headed in the vague direction of the windmill.

Delfzijl in the Netherlands is a sister city of Shinnan-yō which may explain why there is a windmill in the park on the summit (below) of the small mountain. Unbelievably this wasn’t the first Dutch windmill I have seen in Japan as back in April last year Scottish Neil and I stopped off at Sakura in Chiba to see one amidst some beautiful fields of tulips. 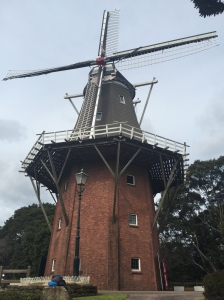 It was obviously the wrong season for tulips in this part of Yamaguchi but I can only imagine that it’s quite the spectacle when they are in bloom or when the cherry blossoms season arrives. As I was walking back to the station I came across this tall statue (below) in the vicinity of Kensho-in Temple which was a nice bonus as I am always keen to visit such structures.

The name of this particular one is a bit of a mouthful for it is the Mokuzou-shou-kan-zeon-bosatsu-ryuzou. It was made during the Kamakura era (1185–1333) and was designated as a cultural asset of Shunan city in the 53rd year of the Showa period. 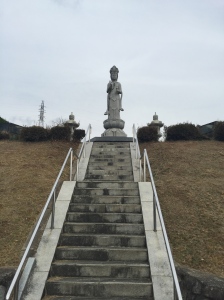 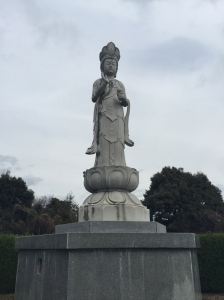 Trains leaving Shinnan-yo aren’t too frequent by the regular standards I’m used to but fortunately my timing in returning to the station was good and I was able to catch a train within minutes. The time saved enabled me to get a bit more out of my day and meant that I had time to stop off in Iwakuni on the way home. Iwakuni lies about 40 minutes away from Hiroshima and from the station I took a 20 minute bus ride (300 yen one way) to Kintai-kyo bridge which I first visited with my wife and her parents back in 2013.

This time I saw it from the other side first before wandering over (or under if you prefer!) to see it from the more familiar and photogenic side. As I mentioned in the previous post on this bridge, it was originally constructed with no nails or nuts and bolts. These days it has some cunningly concealed steel reinforcements. It is one of the most famous bridges in Japan and was originally built in 1673. 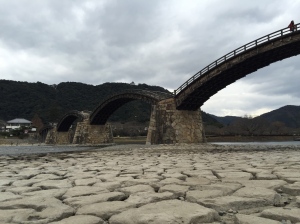 I’d forgotten that you have to pay to cross the 210 metre long bridge and get to the other side where Iwakuni-jo castle stands atop Mount Shiroya. As I had done all that nearly four years prior to this visit I decided against it and decided to return to the station as it was mightily windy outside in stark contrast to earlier in the day when the weather had been glorious for such a Winter day. 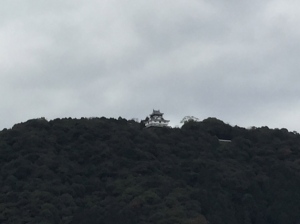 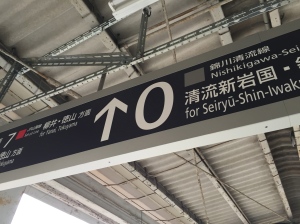 Back at Iwakuni station I noticed there was a magical, mystical Platform 0 which is one of those things I’m always amused by. It’s not quite Harry Potter-like but is enough of a rarity for me to appreciate it even though I’ve seen a few of them now on my travels around Japan.

Next: Click here to read ‘On The Fox Trail……In Osaka’

2 Responses to A Day In Yamaguchi Prefecture