Another Mystery Drink Dispensing Vending Machine But This Time It Was Much Closer To Home!

About a month after my previous three hour return cycle ride to the Mr. X vending machine in Ota Ward I discovered that there was a much, much closer mystery drink dispensing machine. 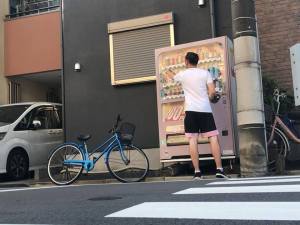 This one is only a few minutes away from the Tokyo Fox Global Operations Centre in Itabashi-ku in an area that I have bypassed hundreds and hundreds of times. The top shelf of the machine reveals a very foreigner-friendly line up of fizzy drinks (they are mostly imported multi-pack cans!) priced at 100 yen a can but in the top left corner is the mysterious Mr. X!

Pushing the Mr. X button is of course a risk of sorts but if you`re not too bothered which soda you get then at 80 yen a pop it is probably worth the gamble.

The idea may seem similar to last time but on this occasion there was a huge difference as I purchased six drinks instead of five! Armed with a single 500 yen coin I set out to see which drinks came out, and how random they were!

The much anticipated sequel to Mr X wrapped today & is coming EXCLUSIVELY to https://t.co/LR9fSffeiL in the next month (or three!!)! It is not to be missed!! 🤣 https://t.co/0Zq2S6coHC pic.twitter.com/nbVonRLB7k

First out was a Conan soda drink. For those who don`t know Detective Conan is a hugely popular cartoon character in Japan with just under a thousand episodes of a TV series to his name. I have seen a grand total of one episode which I watched on the back of a trip to Hagi in Yamaguchi Prefecture a few years ago as I saw a poster advertising some real life views which were used in an episode. I took the pictures first and then later watched the episode!

As for the drink, it is basically a sweet white milky soda similar to your Calpis-type drinks. It says サイダー (cider) on the can but for those not in the know this word has a completely different meaning in Japan! It tends to just mean soda and is definitely not the alcoholic drink made from apples (not common here at all) which is known as シードル (shīdoru). 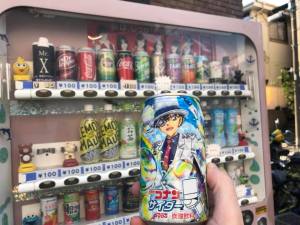 Just twenty metres beyond the machine were these interesting looking apartments (below) which will feature in the next installment of Tokyo Modern Architecture when I`ve managed to find enough buildings to fill the ten spaces needed to make that post!

Returning to the machine I continued on with this most pointless of tasks. Coke Zero and Sprite were dispensed in return for my coins.

Can you tell what the fourth and fifth drinks were from the blurred image below?

Of course you can! It was a couple of Fanta drinks! I love the grape one but am not so keen on the orange one. 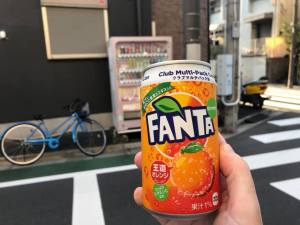 With 100 yen left I went for a sixth drink but was disappointed that it was yet another Conan soda drink.

I only consumed the first drink out and took the rest of them home for my wife and I to drink throughout the month. On the previous occasion, I had a very long ride home but this time I was back within minutes! Do I regret doing the previous ride when there was a similar option so close to home? Not at all! That was a great adventure and it probably wouldn`t have happened had I known about this local Mr. X first!

Bonus: When I first discovered this machine earlier this year there was a 30 yen drink available which has to be one of the cheapest vending machine drinks in all of Japan! For the record, I know it`s not as there are some 10 yen ones in Osaka somewhere!

Tried it! ✅
A bargain at that price! pic.twitter.com/TBlcNDQ6XZ

Click here to read ’This Vending Machine Arguably Gives You The Most Pleasure In All Of Japan!!`