Even though I almost never buy anything from them, the sight of a vending machine dispensing alcohol (usually beer) always catches my attention. Such machines are certainly not so common in city centres anymore so imagine how surprised I was to see that you could buy 110 different types of sake from an auto dispenser. Not only that but it was in a train station too!

The first major stop on my recent trip to Niigata Prefecture was Echigo-Yuzawa which is the easiest and most convenient Shinkansen (bullet train) station for Tokyo residents wanting to access ski-slopes. Out of season it is far less popular. I was there to visit one place by bus but before I did that I had nearly an hour to kill when I came across Ponshukan in the station.

Of course I knew of this place beforehand but I’ve gotta make that intro sound as interesting and dramatic as possible! There was a statue of a drunk salaryman (businessman) outside which is quite a common sight on pretty much any night in Tokyo!!

For my one-coin (500 yen) I was handed a cup and five special coins to use in the machines for sampling a wide variety of sake which is a drink I know pretty much nothing about!

During my time in this station, I consumed more sake than I had done in the last ten years, if not longer! 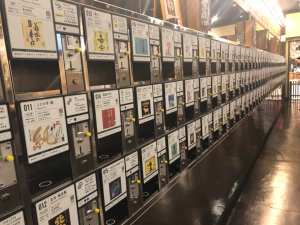 Each drink has information about is its dryness, richness, aroma and percentage volume! Each one is given a rating out of five stars but it was all quite overwhelming and didn’t really much to me so I decided to just go for random ones based on the name or number……and yes I did childishly choose #69!!

Had it not been for the various selfies and other photos, I would probably have finished all five drinks in a few minutes but I managed to spread it out for about ten minutes. 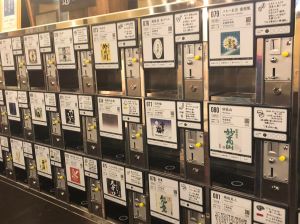 There were also many different types of salt (No, please don’t stop reading!) to try though I’m not sure how! I guess you put it on your hand and lick it off in between cups of sake! Cucumber for 100 yen is supposedly a good accompaniment for sake so that is available too.

Only after the first four sake cups did I notice there was a list on the wall of the most recommended ones, and that final one (a pun-named one, no less!) was actually the best of the five. 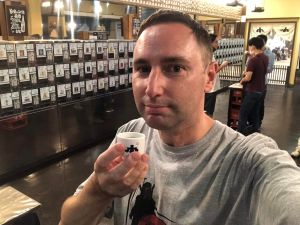 Before entering Ponshukan I was a little bit worried about becoming a little drunk as I rarely consume alcohol these days but it surprisingly had no effect on me. That certainly doesn’t mean I could work my way through all 110 though (10,100 yen if you want to do that!) but some people have done that before and they have their pictures in the hall of fame. 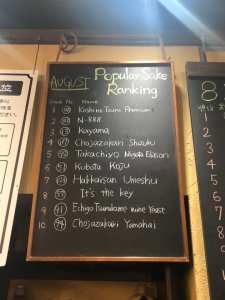 As much as I love a good challenge that is one which I’ll pass on for now!

Click here to read ‘This Surely Has To Be Japan’s Cheapest Drinks Vending Machine!’

Click here to read ‘Another Mystery Drink Dispensing Vending Machine But This Time It Was Much Closer To Home!’