This Vending Machine Arguably Gives You The Most Pleasure In All Of Japan!!

Feeling a little worse for wear after a very late night out drinking in Sapporo I was in need of a fizzy drink to give me a sugar-kick the following morning so I thought I’d get a coke and in the land of the vending machine I knew it wouldn’t be too difficult to get one. As I was walking through the Chuo Ward area I could see what looked like a vending machine corner full of Coca Cola vending machines. However, I was in for quite a shock when I stepped beyond the curtain. 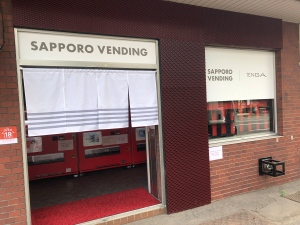 Instead of the expected drinks, it was masturbatory aid products for those people who feel they erm, need a helping hand for such activity. The machines are supposedly the world’s first machines to sell these goods made by Tenga who are supposedly the leading producer of such things in Japan and no I really didn’t know that before researching for this post.

Alright I hold my hands up and admit that what’s written above is not exactly true. I knew about this place having seen it on SoraNews24 a month prior to this trip. If I really had needed to quench my thirst though then there were drinks on offer as one of the machines stocked a range of energy drinks with names like Night Charge, Body Charge and King Charge which are presumably there to help keep you going all night long. It was to be a very long night for me for very differing reasons (read all about that in the final few paragraphs of this post!) so maybe I should have tried one of those drinks.

This vending machine stand is open 24 hours a day and is designed to take away any embarrassment that people get from buying such products over the counter in a shop.

As with tobacco and alcohol vending machines in Japan, there is age verification system but having never bought any of those items from a machine I don’t know exactly how it works! For those who don’t know how such sexual products work then fear not as an instructional video plays on a screen next to one of the machines. 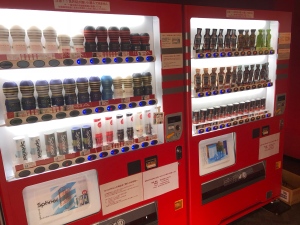 These machines selling cup and spinner products in five different colours (ranging from ¥730 to ¥1900!) have been operating in this red-light district of Sapporo since the start of August on a trial basis.

5 Responses to This Vending Machine Arguably Gives You The Most Pleasure In All Of Japan!!