Thanks to the Rugby World Cup though I returned to the latter for 24 hours in Sapporo and wanted to make the most of it so crammed a fair amount of stuff into that day. I flew up to New Chitose Airport after work on this particular Saturday evening at the end of September. On arrival at my capsule hotel at 11:30 pm I didn’t go to bed but threw my bag in my locker and immediately went out to meet my friend Mostyn at midnight.

We began with a quick beer at a bar called St John’s Wood where the many Aussie rugby fans (in town for their game earlier in the day against Fiji) had spilled out on to the streets. It was nice to be able to drink in a street-level bar having lived in Tokyo for all these years where bars are often underground or a few floors up a skyscraper building.

By 12:45 am we had gone round the corner to a restaurant called Daruma 6.4 Shop for Genghis Khan BBQ lamb dinner (known in Japanese as Jingisukan) which is one of the dishes Hokkaido is famed for. 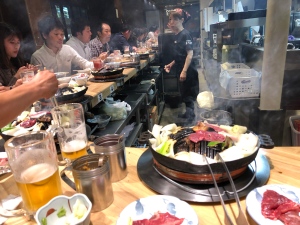 There are two reasons why this type of Japanese BBQ is called Genghis Khan. Firstly, lamb (or sheep) is not commonly eaten in Japan and it’s typically considered a meat from Mongolia. The second reason is that the type of grill the meat’s grilled on supposedly resembles a Mongolian Genghis Khan helmet. 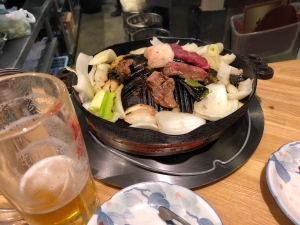 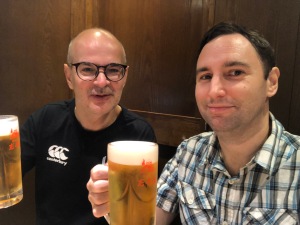 Just down the road from there was a bar called Rad Brothers (below) which Ethan and I went to a couple of times on my last trip to Sapporo back in 2015. They were fairly quiet times but this time was completely different as it was also packed full of people in town for the two big Rugby World Cup matches that weekend. Abba tunes seemed to dominate the playlist in there but there was also an epic rendition of classic tune ‘Freed From Desire‘ by Gala which I got a little carried away by at one stage as I began to jump around. Thankfully I regained my composure and returned to normal state before we eventually called it a night at about 2:30 am.

The total time spent in my capsule hotel (below) was about six hours including the hot spring bath I had before checking out. Such places are not really so good for just lazing around in and are basically just for having a shower and sleep.

The hotel down the road looked like a tacky Egyptian themed one (below) but nothing wrong with that as I like kitsch and the first stop that morning exemplified that!

Who on earth goes to a nightclub at 9am?!! Guilty! Of course I wasn’t there to start the day with some dancing but was just interested in seeing the amazing exterior of King XMHU Night Club (below) which I’d spotted the night before.

Next up was the Tenga vending machine which arguably gives you the most pleasure in all of Japan, wink wink!!

From there I continued east across the Toyohira-gawa River to see this circular footbridge which I thought could make a half-decent photograph. The only problem would be trying to get an aerial view of something that was not so impressive from ground level. Luckily, there was a wedding planning building nearby which I just walked in and climbed up a few floors to capture the full 360 degree circle. (*) Check out the bonus content at the foot of this post to see a similar place much closer to Tokyo!

Having met up with Mostyn again, we then took a train and bus to see the life-size Moai statues and Hill of the Buddha.

Back in central Sapporo we went to Ganso Ramen Yokocho (Original Ramen Alley) which dates back to the 1950’s. It is THE place to go for ramen in the city and was absolutely swarming with foreign visitors when we arrived at about 1:30 pm which was earlier than I originally wanted to go there. As we’d been overly efficient with our time at the Moai place we were there a bit earlier and so had to wait for about 45 minutes to get in and receive our orders. As both of us had talked about the late Anthony Bourdain’s TV shows a fair bit over the years, the place he went to was the obvious choice.

Despite complaining last time about basically paying 100 yen extra for a nob of butter I was adamant that this time I’d just get the regular ramen dish. However, waiting for so long in line and building up anticipation (and generally over-thinking things) obviously affected my brain and I ended up getting the miso butter ramen after all. It was nice but nothing really amazing in my view. 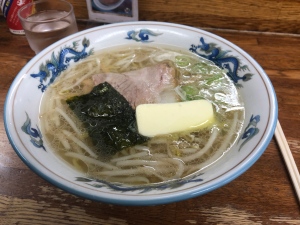 Just round the corner from there was Caffeine Bar (below) which I remembered from my previous trip to Sapporo due to the life-size R2-D2 in the window. Sadly it was closed though! 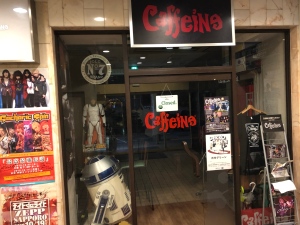 Next up was Odori Park (below) which was the location for one of the city’s two Rugby World Cup fan-zone areas. Mostyn popped off to check into his new hotel whilst I chilled for a bit in the park with the Sapporo TV Tower landmark as part of my backdrop.

The early game that day was between Italy and Namibia which I didn’t care about too much but I was interested to see what the atmosphere in the fanzone (below) was like so went into that area. The rugby action was very much just the background to the more serious matter of alcohol consumption!

Once reunited with Mostyn, we popped round the corner just to basically get a photo of Sapporo Clock Tower (below) which is another famous landmark in the city. 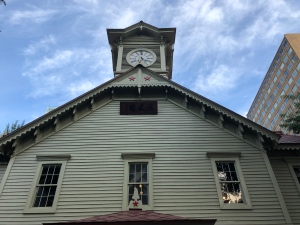 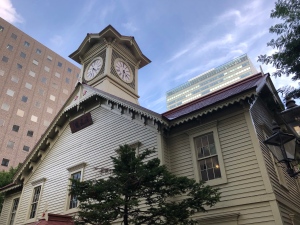 After that we took the train to Fukuzumi Station to see England’s World Cup opener against Tonga at the the spaceship-like Sapporo Dome (below). Little did we know then that it would be the start of England’s journey all the way to the final.

Thankfully I had the next day off work (although I didn’t realise that when I booked my tickets!) and could recover from a long night which was spent in and around Haneda Airport. More details of that enduring experience can be seen in the first link below. Overall though it was all worth it for what was an amazing and eventful 24 hours in Sapporo.

Click here to read ‘This Vending Machine Arguably Gives You The Most Pleasure In All Of Japan!!’

Bonus: (*) This circular footbridge is located in the Shinko Ni-chome area of Naka Ward in Yokohama.