The Worst August Holiday Ever!

In terms of weather, the mid-August Obon holiday this year was the worst one I`ve ever experienced. In a way it wasn`t so bad that I only had six days off this time as it rained on five of those days. We`re not just talking drizzle or brief showers either but fairly constant heavy rain. Of course we remained optimistic ahead of our trip to Izu despite the forecast. The only sunny day too was the first day which was basically just about travelling from Tokyo to Shizuoka. Someone was very excited about the trip though and couldn`t wait to get into his bag!

The first day in Izu actually started out okay and we managed to go to Komuroyama Park early morning before the heavens opened up and it continued to rain for pretty much the rest of the week. 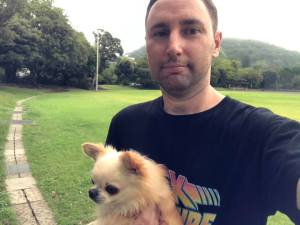 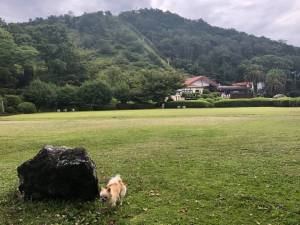 The mountainside is usually fairly sparse where people are concerned but in August there was hardly anyone around which allowed for Maron to run around carefree which was really great to see. 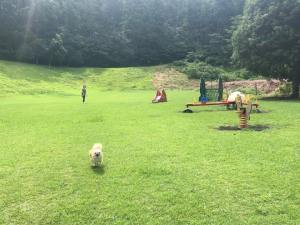 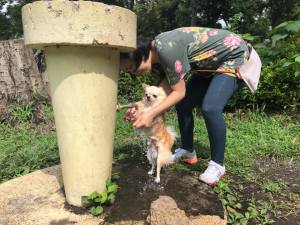 Sōmen is a noodle made of wheat flour which is hugely popular in the hot and humid Japanese summer. If you`d told me ten or fifteen years ago that I`d not only be eating cold noodles but enjoying them immensely I`d not have believed you! However, these really thin noodles served in a light dipping sauce are delicious, and they make for a nice and simple lunch dish.

Whilst my wife was busy in a nearby clothes shop along Route 135 one day I popped quickly round the corner to check out the food vending machines. The usual egg one was there but empty at that time. However, the one with Japanese pears (I`m not actually sure if they are pears! Can anyone confirm?!) in it was a new experience for me.

One lunchtime we went out to a nearby Taiwanese restaurant which we`d driven past many times. It was time to change that and so we went there one day and had some good food. My Taiwan ramen set was very nice but a little bit too greasy. 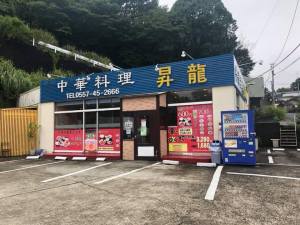 The phrase “Netflix and chill” was certainly apt for this holiday and it did give me a chance to re-watch some old classics which I don`t usually have time for as there`s always so much new stuff to consume. I hadn`t seen `Jaws` (1975) since the late 80s/early 90s so that was first up, and then I began my re-watch of all the Indiana Jones films and got through the first three before viewing the fourth one on our return to Tokyo. 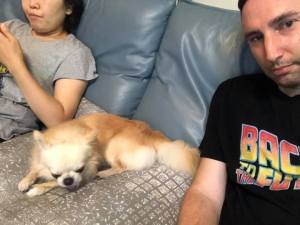 The penultimate day may have been a cloudy morning but that was music to our ears as it meant no rain. Not completely though as there was still some light rain but it didn`t last too long when we went to Komuroyama Park again, and that was followed by a drink at a newly opened cafe over the road from the car park.

Hikari Village (1261-64 Kawana, Ito) is the name of the place, and it was a nice setting outside amidst the greenery with ocean views too. I`m sure it`s a lot nicer when the sun is out! 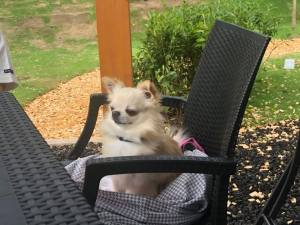 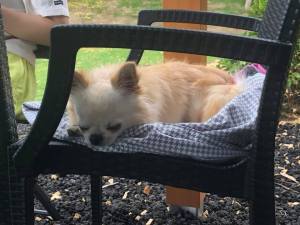 Later that afternoon was the only time I managed to get out on my own as it seemed clear at one stage. It didn`t last long though and the rain was inevitable as I took a short train ride down the east coast to do a hiking trail along the rugged volcanic rock shore between Izu-Kōgen and Jōgasaki-Kaigan stations. 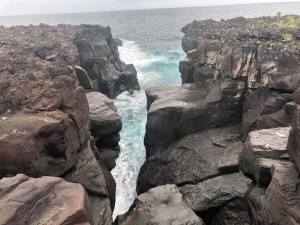 It proved to probably be more memorable because of the wet conditions and I was ultimately glad that I had made the effort to escape from the house for a bit of adventure. It all felt worth it once I was back home and in the bath. 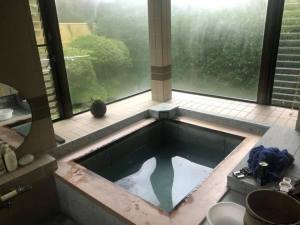 Despite the unfortunate weather and lack of activity (that hasn`t stopped me getting a blog post out of it though!!) we were still quite sad about having to return to Tokyo which we did via the Odoriko line. This cheaper style of luxury train runs all day but only once a day does it go directly from Ito to Ikebukuro which is almost door to door for us!

The wet conditions throughout the week did give me a lot of time to reflect on all the better August holidays I`ve had over the years.

August holiday throwback thread to remind myself of all the better holidays!

Conditions were pretty good for all those trips to Taiwan,  Australia, Laos, Italy, Tunisia, Switzerland, Liechtenstein, Italy, Slovenia, Croatia, Bosnia & Herzegovina, the USA, the UK and Cambodia as well as a load of places in Japan. I may have been slightly unfortunate on this trip but overall I think I have been fairly lucky with the weather. Lets hope next year is an improvement on this one!

A Leicester City fan teaching English in Japan
View all posts by tokyofox →
This entry was posted in Japan Travel and tagged fruit vending machine, Hikari Village, Ito, Jogasaki Kaigan Coast, Kawana, Komuroyama Park, Route 135, things to do in izu, things to do in shizuoka. Bookmark the permalink.