Having made such an effort to get my bicycle to my parents-in-law’s house via local trains I was keen to get out on it at some point. The weather forecast for almost every day of the holiday in August was stormy and rainy though there would always be some sunshine too. It was just very unpredictable and one had to just take something of a risk when going out. My thought was that if I got rained on at some point then so be it.

The main focal point for this particular afternoon was to be Jogasaki Kaigan Coast which I had actually visited before but on that occasion it was quite overcast. This time it turned out to be a glorious day and getting to my first port of call was fairly simple. There was even a nice green cycling path for much of it that was clearly separated from the road. There were also some lovely coastal views at times as well as a giant gorilla statue outside one house! An even bigger one can be seen though in ‘Cycling In Izu #2‘!!

A gorilla outside your home! Why not!!

After about 40 minutes in the saddle, Jogasaki Coast was within sight.

Having parked my bicycle in the car park I headed to see the coastal rocks and I wasn’t disappointed as the sea was a beautiful turquoise colour and the natural formations looked great too. This is a really easy stretch which can be walked by pretty much anyone but there is also a much longer hike of around nine kilometres which winds its way round the coast. That’s something I’m definitely keen to do at a later date no doubt. 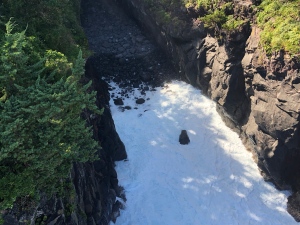 One of the main draws for people going to Jogasaki is the near-50 metre-long Jogasaki Suspension Bridge which is about 20 metres above the water and supposedly has a 20-person capacity but it looks like there are more than that in my first picture below!

Kadowaki Lighthouse (below) is another popular sight and I never realised it last time but it does appear to look a bit phallic…or is that just me?!! 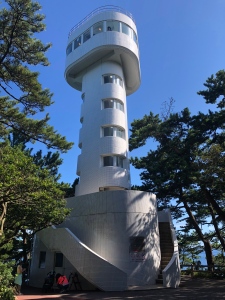 Just a few metres from my destination was Izukogen Rose Terrace; a cafe with an interesting-looking structure outside. 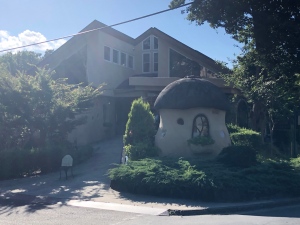 Izu Teddy Bear Museum (below) is one of those places which I often see included as part of itineraries for the area but I had never even passed it by. Being on my bicycle enabled me to see this popular and busy place. I didn’t really feel the need to go inside as I was content with what I could see in the garden outside. Of course the ¥1080 entrance didn’t help me change my mind! 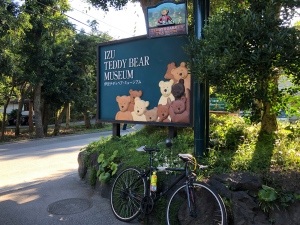 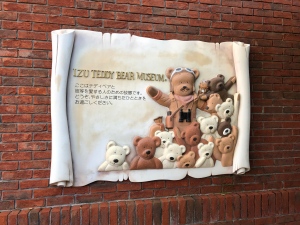 My original plan was to just follow the Route 135 back home but I was keen to check out a place called Cat Museum which I’d noticed on my maps app. Little did I know that it would all be uphill and it was a real big struggle to get there. As mentioned in my Cycling to Kawagoe post my new bicycle is not like my old one as it has far fewer gears so it is almost impossible to ascend such steep gradients and I have to just push it.

The beautifully shaped Mount Omuro (below) could be seen peaking out from above some buildings as my journey progressed which took me a little by surprise as I never realised I was so close to it. 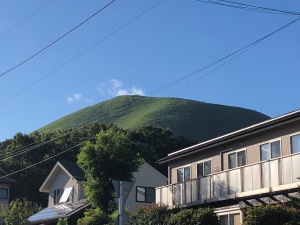 As I was following the walking trail set out by my maps app I guess I shouldn’t have been as surprised as I was to have to complete the journey to the Cat Museum along a gravel path which really was not so good for my fairly thin tyres. I finally arrived at the museum (below) as Auld Lang Syne was playing. This tune, synonymous with New Year for many people, is actually used quite often in Japan to alert the patrons that the place they’re in is about to close. I never had any intention of going into this museum either as ¥1300 is way too high for something of such mild interest to me. 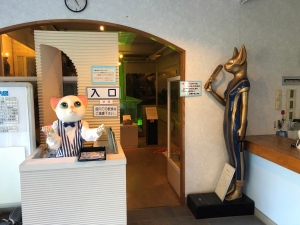 Thankfully there was no more uphill climbing after that and I soon wheeled down to Lake Ippeki-ko (below) which is one of those places I seem to end up visiting on most trips to Izu. I love the serenity of this area and it is a great place to take a walk round. 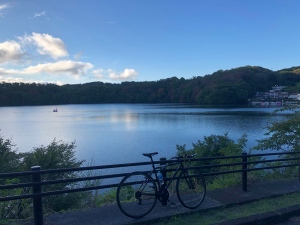 The abandoned ruins of it’s Lakeside Hotel (below) were something I checked out a couple of years ago and I was pleasantly surprised to find that it was still so easy to just walk in and explore the old place. 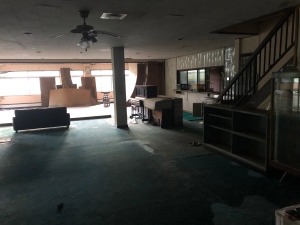 Some of the convenience stores in Izu seem to have more modest coloured signs rather than their usual vivid ones which I presume is to just make it blend in better with the natural environments surrounding them.

Japan has millions of vending machines which mostly just sell drinks but there are a fair few other ones and I guess I’m a fan of them. This particular one (below) sells eggs which seems a rather strange choice of good for anyone to be buying from an automated machine!

As you can see below it was a 25 kilometre ride but that doesn’t tell half the story given the nature of the land in that south-west part of the map which is incredibly steep in places. 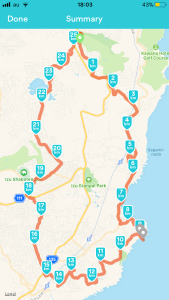 Click here to read ‘Taking A Bicycle On A Train In Japan – It It Actually Allowed?’