Taking A Bicycle On A Train In Japan – It It Actually Allowed?

When I got a new bike (second-hand from a friend) last October I was aware that it could be folded in half and started to get excited about the possibility of taking it on a train which would open up more possibilities for me as the kind of places I often go to are sometimes very far from the nearest stations. Sadly the alum key just spun round and round as the groove had eroded away so that idea was soon killed off.

The idea of putting it in a bag and just taking it on the regular train then entered my mind. Unlike in London or Melbourne or wherever, you can’t just wheel your bike onto a train in Tokyo. No surprise really given how overly-packed they are. However, it seems you can take it on if you make it more compact and bag it up. 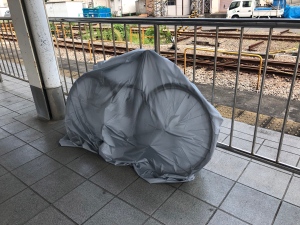 What could it be I wonder!!

I was told by my bikes previous owner Matt a few days before this trip that it’s fine to take it on the train as long as you get on at the very front or back of the train with it wrapped up in some way. Having practised a couple of times, I took the front wheel off, turned the handlebars 90 degrees and then put it under the biggest 100 yen bike cover I could find in the shop.

Not wanting any confrontation when going through the station entrances gates, I decided to enter via an unmanned exit at Oyama Station and then had to carry the bike up the stairs and over the tracks to the other platform. Not easy and when the first train came I wasn’t quite ready to board. I got on at the back of the next train and was on my way.

What I found out was that you really need time when trying this. Not just to get the wheel off and it covered in a bag but to get to the very end of the platform and at Ikebukuro it is so long that I wasn’t exactly sure where the train I wanted (the Shonan Shinjuku Line) would stop as not all trains come to a standstill at the same point. 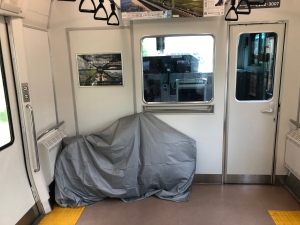 Going direct from Ikebukuro to my parents-in-law’s house in Izu would’ve been a lot easier but I’m not one to do things by halves so decided to have a few stops on the way. It would mean putting on and taking off the front wheel about half a dozen times but I had got it down to a tee and was capable of doing it with F1 pit-lane style timing! 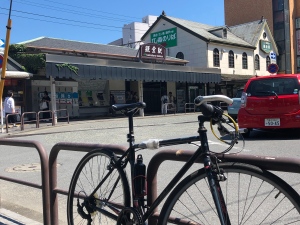 Kamakura was the first stop as I wanted to visit this awesome shrine. 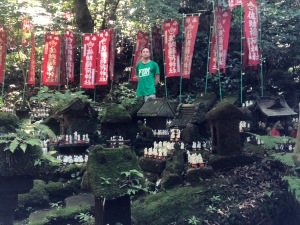 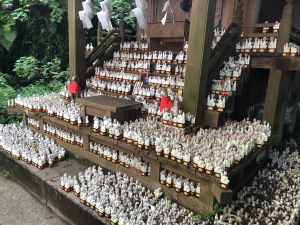 From Kamakura I cycled on north for about a dozen kilometres through Ofuna to see Yokohama University of Pharmacy (601 Matanacho, Totsuka-ku, Yokohama-shi) which is an interesting-looking structure that dwarves all other buildings in the area. The former Hotel Empire is about 70 metres tall and was actually one of the first high-rise buildings in all of Japan. It opened in 1965 and is a 22-storey building with a roof like Buddhist architecture. 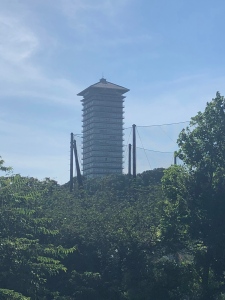 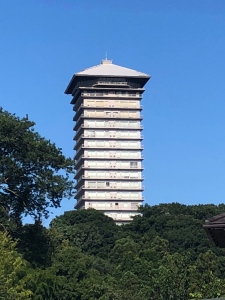 At Fujisawa (6.5 kilometres south of the aforementioned tall building!) I got back on the train but annoyingly there were some people stood at the front of the train behind the driver. When I saw this situation after the doors first opened I hesitated about boarding but then thought “sod it” and got on. 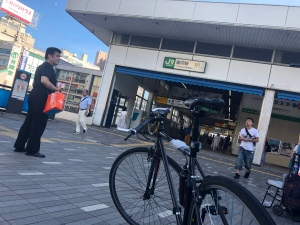 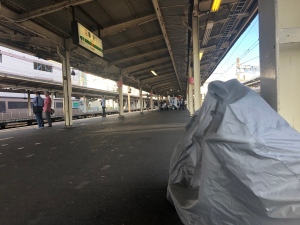 The next stop was Odawara where I transferred to the Izuhakone Railway Daiyuzan Line fairly smoothly……or as smoothly as can be when lugging a huge package through ticket gates! 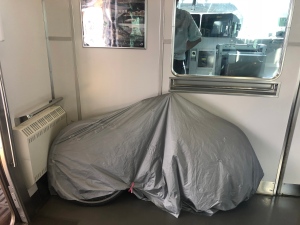 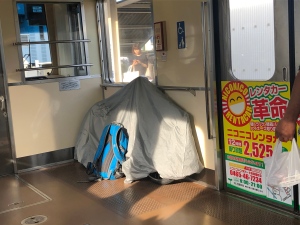 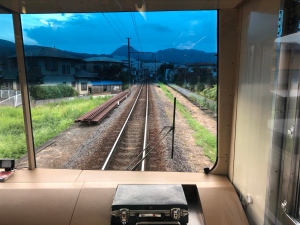 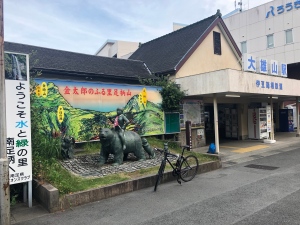 Daiyuzan Station is at the end of the line and was where I disembarked just after 5pm. I wanted to visit a temple but little did I realise how hilly and mountainous the area was! I had just looked at the map and saw it was a 3.5 kilometre ride so thought I could do it in no time at all. How stupid of me! Instead it took about 40 minutes and involved a lot of pushing the bike uphill which would become quite the theme over the next seven days!

My t-shirt was almost completely soaked in sweat by the time I arrived at Saijo-ji Temple (1157 Daiyucho, Minamiashigara-shi, Kanagawa) just before 6pm. I had pretty much not seen anyone at all throughout the whole cycle ride from the station and only when I left the place 15 minutes later did I actually see another person. 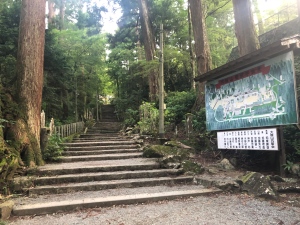 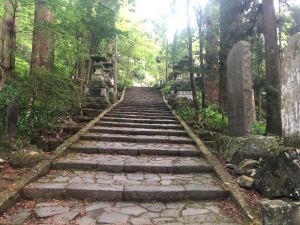 Beforehand, I just thought this would be a fairly small temple but reality was that it was a whole complex of temples hidden among ancient cedar trees and streams on a mountainside. I imagine it’d look pretty cool in the Autumn with all the colourful leaves but given the location of this place it’s hard to imagine that I’ll ever return! 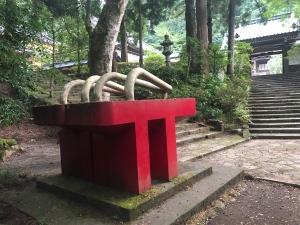 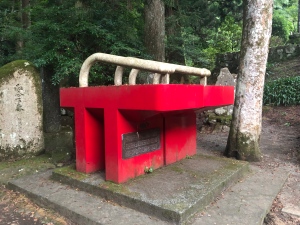 This temple was founded in 1394 and has a really tranquil atmosphere but I was only there to see the biggest geta (traditional Japanese wooden clogs) in the world. It is believed that they were worn by tengu during their visits to the temple. For those who don’t know, Tengu is a creature that is a common part of Japanese folklore and legend has it that they supported the Zen priest who first built Saijo-ji Temple. 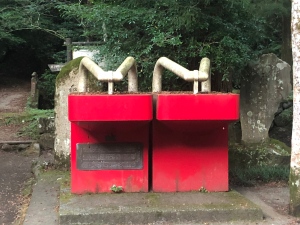 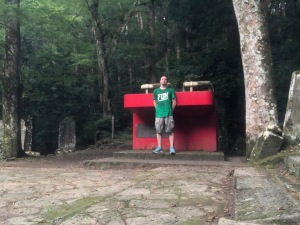 It was a huge and spacious place but it was a little eerie with me being the only person there. Needing to get back to the station for my train, I didn’t look around too much and if I had I would maybe have seen the other geta in the place that supposedly come in a variety of varying unusual sizes! 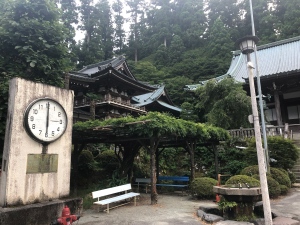 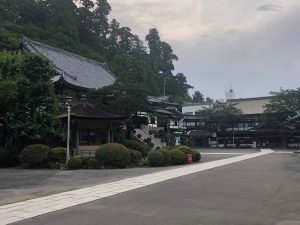 The ascend to this temple may have been far more of a nightmare than I had originally anticipated but the return journey was a thrilling downhill ride which was completed in no time at all and really did give me a truer understanding of the phrase burning rubber as my tyres were boiling hot when I tried to instantly take the front wheel off at the station.

A potentially nightmare moment then followed as I was initially refused entry by the staff members who were in a bit of a fluster and kept saying in English the word compact. I can understand their feeling of course but they must’ve seen me exit their station just over an hour or so earlier.

Having missed my intended train, I then had to wait for the next one whilst a couple more members of staff were consulted. I hate to think what I would’ve done had they completely refused me entry but thankfully they realised that a bike in the corner of an almost-deserted train wouldn’t be so much of a problem. They tied some string around parts of the bike and I was finally on my way. 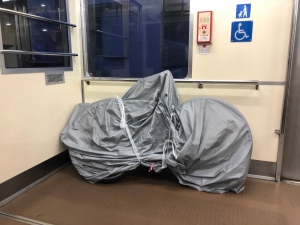 Now with added string!! Still looks the same though!

Changes of train at Odawara, Atami and Ito all passed without problem and I finally arrived at my in-law’s house a little later than I had hoped for. My wife soon arrived by train having had a far easier and relaxing journey.

So will I take my bike on the train again?

Firstly, it is a little embarrassing to be seen carrying such a large thing through the stations but once you’re over that it’s not so bad. The possibility of confrontation with the ticket gate staff is a worry to be honest. It doesn’t matter at all when exiting but entering could be a problem especially if it’s a long way from home. I actually have to still bring it back from Izu so definitely have to do it at least once! I can’t see myself regularly taking it on train trips to be honest but never say never I guess!

5 Responses to Taking A Bicycle On A Train In Japan – It It Actually Allowed?