Dining Out: A Restaurant That Only Sells Canned Food!

Think of canned food and the likes of spam, tuna, corned beef and sardines comes to mind but the ones on sale at this quirky bar are a far cry from those classics.

A few years ago the Rambling Northerner and I dined out in fine style at a vending machine stand in Shimbashi after our trip to see the horse racing in Fuchu. One of the comments on that post on social media recommended a restaurant/bar where they only served canned food.

It’s been on my “to do” list ever since then and three years on I finally got round to going there having managed to persuade my Australian friend and colleague James to join me after work nearby one night. It’s called Mr Kanso and is actually part of a chain. The one we went to was near Tamachi Station on the Yamanote Line. 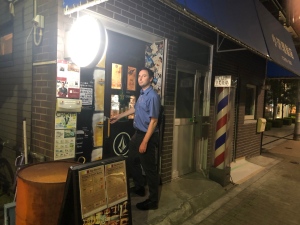 Pretending to enter the bar when really we had actually left by then!

The place was a lot smaller than I had thought it would be on arrival. There’s only room for five or six patrons to sit at the bar and when we walked in the barman asked if we smoked. We said no and the two people already in the place were then moved down to the end of the bar whilst we sat next to them (with a spare seat between us!) in the non-smoking section! This is Japan! 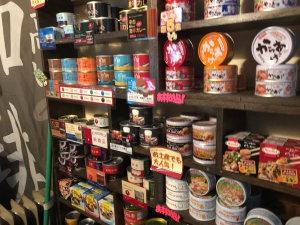 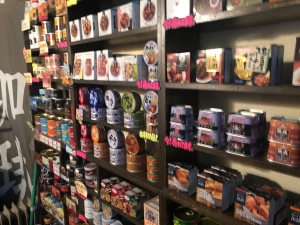 The cans are displayed on shelves where you enter this no-frills drinking establishment and they are all coded with ten colour stickers with prices ranging from a reasonable 200 yen to an absolutely ridiculous 2000 yen! It was tempting to have the Knob Creek (below) but we played it much safer and kicked things off with a couple of big Heinekens for 700 yen each and then went to choose a few cans. 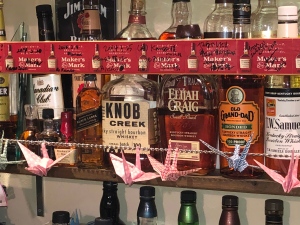 Just five days prior to this I had been to the vending machine theme park-like place in Sagamihara so I probably wasn’t really in the mood for more processed food. It’s easy to make the comparison I guess but they really are quite different experiences. Admittedly, my expectations were incredibly low and they were just about met! 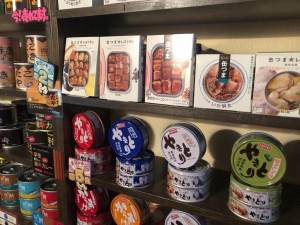 Some of the cans are incredibly rare and there are all sorts of meats, yakitori, seafood (whale, eel etc), curry, soup, fruit and sweets. The weirdest ones seemed to be the curry cans which included Hokkaido bear meat, wild boar, seal, walrus and deer among others.

The plan was to choose four or five cans and see how hungry we still were after that! Unlike many places in Japan, you actually have to pay for each thing as you buy it at Mr Kanso rather than just picking up the bill at the end of your night. Basically you choose your cans, hand them to the barman who then cooks them up before presenting serving them up in the can on a paper plate. 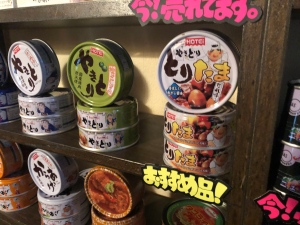 The cans we chose were: 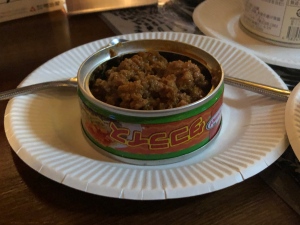 There are actually over 30 of these restaurants/bars all over Japan with the original one coming from Osaka. I guess it is a unique experience and one that is worth trying once. It’s certainly not the best place though if you’re on a budget as the real fun part is finding rare canned foods.

33 Responses to Dining Out: A Restaurant That Only Sells Canned Food!