It’s been a while since I had regular curry in a restaurant as all recent ‘Dining Out’ posts have been about stranger curry tastes such as apple, sheep’s brain, miso milk and the mysterious Godzilla one! I came across this train-themed restaurant a couple of years ago and have been meaning to go ever since. On discovering late last year that my friends James and George had been to a train bar in Shibuya I told them about this one in Meguro Ward and they were both keen. After a couple of failed attempts, we finally met up there for lunch a couple of months ago. 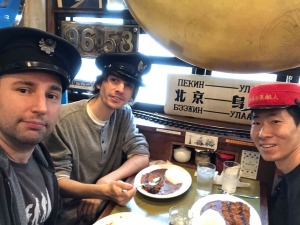 The restaurant is close to Yutenji Station which for some reason I thought was two stops from Shibuya. However, it’s actually three as I found out the hard way! I exited both train and station and mailed James to ask which exit they were at. He said south east which kind of matched up with what I was seeing but I couldn’t find him. I walked around and was just about to mail him to confirm he knew it was Yutenji Station where we were meeting. To my horror I then noticed it was me who had made a mistake as I was at Naka Meguro Station. What a plonker! I rearranged to meet them outside the restaurant which was thankfully easily walkable in about ten minutes for me. I even got there before them!

It was still empty when we entered at 11:45 am which was a relief as it’s a tight and cramped restaurant. Cosy is the word you’d use if you were an estate agent showing prospective buyers around such a place! Being vacant of people was music to my ears as it meant it was a lot easier to photograph it’s interior. 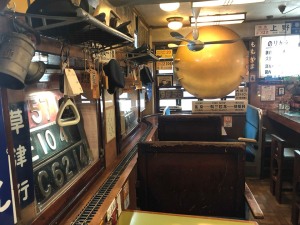 Despite an ever-growing number of train-related posts on Tokyo Fox in recent years, I wouldn’t say I’m into such train station paraphernalia. Yes, really!

Like many restaurants in Japan, your order is made using a ticket machine. Be aware that it is all in Japanese only. Once the ticket’s been given to the staff member you are then required to choose it’s spiciness from four varieties. This menu is in English and the levels of spice are all train related. There’s Super Limited, Limited, Express and Local which are different types of train on some lines in Japan. A nice touch!

The three of us all chose different levels of spice with me opting for the second hottest one as it costs 300 yen extra for the spiciest! None of us thought our curry dishes were spicy at all though! Proof (not that it was ever needed!) that the spice level in Japan is way less than what is considered spicy in the western world!

There are antique train signs aplenty at this place and there are a few other notable set-pieces such as the ticket collection window and the old-fashioned train seats which we managed to squeeze into. A quite varied selection of train conductor hats are also available to wear and I made sure they were handed out! 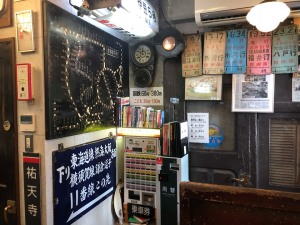 As both James and George opted for katsu curry (990 yen) I felt I should get something different so ordered the cheese curry (950). When the food was ready the waitress put each dish on a mini train that takes it from the kitchen hatch to the diner’s tables. In some ways, it’s not so different from what is common place in conveyor-belt chain restaurants. The style of train is different. The speed too! Given our seating position down the back of this cosy little restaurant, it only had to travel about two metres to reach us! Fact is the waitress could easily have just leant over the counter and handed the curry to us. That wouldn’t be so much fun though would it!

The taste was really nice but you can’t really go wrong with such a dish in my opinion! This really is not the kind of place though that you come just for the curry though as it’s all about the setting, the railway paraphernalia and the unique dining out experience. 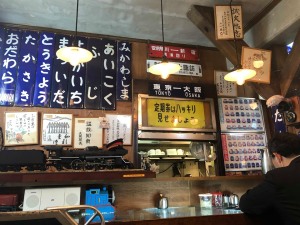 Click here to read ‘Dining Out: A Restaurant That Only Sells Canned Food!’