For about a decade now I’ve always been impressed by the sight of a Platform 0. There’s something slightly mystical and Harry Potter-like about such platforms and one has to wonder why some stations have them whether it be because it’s been added on that particular side of Platform 1 or just because they began their numbering from zero!

Whenever I’ve come across one in Japan I’ve taken photos of it so was very interested to see Geoff Marshall’s tweets and YouTube video (Watch it here) late last year about the seven Platform Zeros in Britain. By contrast there are a whopping 43 in Japan across 24 prefectures so the idea of going round them all in a day (or three!) is definitely out of the question. Just two of them are in Tokyo and they are less than ten kilometres apart.

First up is Ayase Station on the Chiyoda Metro Line. Their Platform 0 is solely used for taking passengers from there to Kita Ayase Station which is the line terminus and seems to be out on a limb on the Subway route map. Ayase can also be accessed via the JR Joban Line which uses the same platforms for it’s trains. 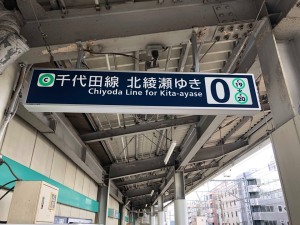 If you’ve ever taken the Keisei Main Line from Narita Airport, then there’s a fair chance you have arrived on Platform 0 at Nippori Station before changing to the Yamanote Line. I must’ve done that journey a few dozen times over the years but never once noticed the platform number! 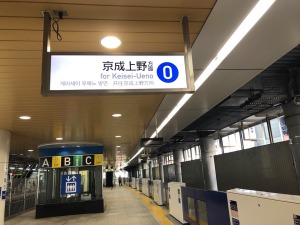 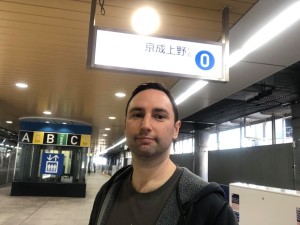 On a very tenuous note we move from Platform Zeros to stations beginning with the letter ‘Z’. There are 21 in all of Japan and just two of them are in Tokyo; Zōshiki and Zoshigaya. I visited the former quite recently when I went to see Rokugo Watergate which is about 15 minutes away on foot. 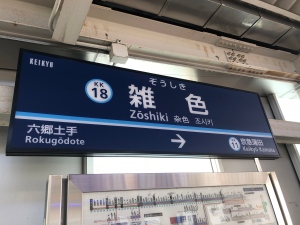 As for Zoshigaya, well I used to live there but moved out not so long after the station opened as part of the new Fukutoshin Line in June 2008. I haven’t been back there in a long time so here is a picture of a much younger me outside the station in April 2010 as part of the ‘Cycling the A-Z of Tokyo Stations‘ challenge.

Enough “Z” chat (not to be confused with Zzzzzzzzz!!), lets move on to some proper train-related news. Takanawa Gateway Station became the first new Yamanote Line station in nearly 50 years when it opened last Saturday (March 14th) and Tokyo Fox was indeed there on the opening morning to see what was going on.

As the tweet above shows, this station was of more interest to me due to it’s use of Katakana in the name. For those who don’t know, Japanese has three styles of characters for writing. Kanji comes from Chinese and is the most complex with each one representing a concept. Hiragana is for Japanese words and katakana is for foreign words.

I took a little detour en-route to my workplace last Saturday and the first thing that struck me as I stepped off the train was the wood-grain flooring which I think really makes it stand out from the other stations and gives it a very modern feeling.

The station building is the work of architect Kengo Kuma who also designed the National Stadium which will be the main venue at the Tokyo 2020 Olympics. Don’t just look down at the floor but up too as the 110 metre-long origami-inspired roof is pretty impressive and allows light to stream in to this completely indoor station.

Another thing of note at this station is the angle of the touchpad for the IC Cards. Whereas you usually slap your card downwards, some of the gates at Takanawa Gateway involve a side swipe. Click here to see my friend Mac’s YouTube video for a more comprehensive and informative view of the station’s interior and exterior.

I remember missing the announcement (in June 2014) that there was going to be a new station so when the stations were all numbered to help the influx of incoming tourists I wondered why there was no station number 26. It was only then that I knew a new station was going to be built in time for the Olympics. Takanawa Gateway (JY26) slipped into what was the biggest distance between stations on the Yamanote loop. The shortest by the way is between Nishi-Nippori and Nippori!

A public poll took place and the top three choices for the 30th Yamanote Line station (it is also on the Keihin Tohoku Line) were actually Takanawa, Shibaura and Shibahama yet JR East decided to go with the unpopular Takanawa Gateway which had come in 130th place! Despite petitions to change the name, JR stuck to their guns and the result was Takanawa Gateway as the name reflects history and future hopes. The only gripe I have with it is that there’s no Platform zero!! 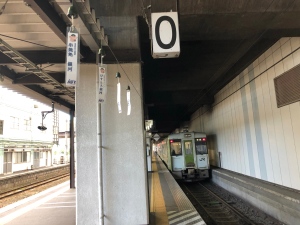 I’m a bit gutted that I have been to many of the places above but never got to see their platform zeros. If you have been to any of them then please send me a photo on here or via Twitter (@tokyofox) as I’d love to collate them all. #WeStopAtNothing!

Click here to read ‘Cycling The A-Z Of Tokyo Stations’

7 Responses to #WeStopAtNothing! Platform Zeros In Japan, Z Stations In Tokyo & The Opening Of A New Yamanote Line Station