Hidden Treasures Along The Keio Line #9 – The “Wall-E” Building

The Keio Line principally connects Shinjuku to the western side of Tokyo with seven different lines running through to the likes of suburban city Hachiōji and the mountainous area at Takaosanguchi. All of it’s stations actually lie within the boundaries of Tokyo and, thanks to regular free tickets, Tokyo Fox has dug deep to come up with a few places worthy of visit beyond perennial favourites like Mount Takao and Tama Zoo……

My first thought on seeing this alien-looking building was that it reminded me of Wall-E; the waste-cleaning robot from the self titled 2008 Disney movie. Those “eyes” on the roof also look like some binoculars. What do you think?

This condominium was completed in December 1989 and is available to rent for around 100,000 ($878) per month for a 2LDK* apartment but I’m not sure if that was for one of the lower floors or the all important fashionable top floor of this 6th Tashiro building. For the record, the first Tashiro building was built in 1986, and continued to be built with annual regularity until the early 90s but they weren’t always cool futuristic constructions like this one in western Tokyo. 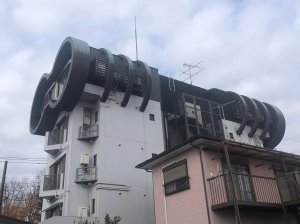 Bonus: The M2 Building (2-4-27 Kinuta, Setagaya-ku) which is now known as Memolead Tokyo is a structure that vaguely reminds me of the aforementioned one in Hachioji. It was designed by famed Japanese architect Kengo Kuma (designer of Takanawa Gateway Station and the Japanese National Stadium which was used in the Tokyo 2020 Olympics) and was completed between 1989 and 1991. These days it is a Citizens Information Bureau but it has previously been used as a funeral hall. 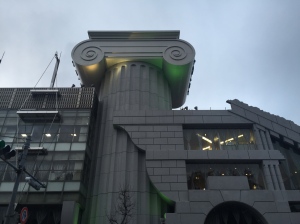