4 Castles In 4 Different Prefectures Within 24 Hours

Whenever I see that a place has a castle I kind of get excited and always make an effort to see it. Why I do this, I really don’t know as I rarely bother going inside them anymore and I have begun to think they’re not all that different from each other.

Back in October last year I went on a very busy solo mini-trip for four days taking in quite a few different prefectures with many of them possessing some castles I’d never seen. First up was Ogaki-jo in Gifu Prefecture which is the answer to the question posed in the tweet below! This castle was located just eight minutes south of Ogaki Station.

And here’s the second castle of the day. Where?? pic.twitter.com/UEMO58vugR

The next castle (above) followed a few hours later and was the only one of the four I had previously visited. It was Hikone Castle which lies on the east coast of Lake Biwa in Shiga Prefecture. This is one of only five castles listed as National Treasures in Japan. Hikone’s three storied castle is relatively small but it’s design combines multiple different architecture styles, and the whole castle area is really picturesque with it’s inner and outer moats as well as the gardens. It served as a filming location for ‘3 Ninjas Kick Back‘ (1994) and ‘The Hunted‘ (1995).

Technically I did first see the third one in Wakayama on the same day as the previous two but it was late at night and it was pitch black so my camera was unable to pick it out clearly. At sunrise the following morning though I could see it more clearly from my hotel room, and then down at ground level.

A 4th & final castle was seen yesterday morning too. Kishiwada in Osaka pic.twitter.com/oqIUDlmh0x

The fourth and final one was probably the one I was most excited about seeing though as it was used in ‘Snake Eyes: G.I. Joe Origins‘ (2021). As the train chugged its way up the coast I decided to look at the exact opening time of Kishiwada Castle. I was then horrified to see that it was closed! It was a Monday and in Japan this is the most common day for places like shops and museums to be closed. Castles too I guess!

I was gutted but as Takojizu Station (this one is actually closer than Kishiwada which is the next station) was approaching I thought I’d still go and see exactly what I could see. The first view (seen at the top of this post) was hugely impressive. I decided to walk around the castle and just admire its beauty from afar.

When it comes to castles in Osaka this obviously isn’t the one which comes to mind to most people but if you have time then it’s worth the hour trip down the coast to Kishiwada. There was barely anyone else around when I was in town on this particularly lovely sunny morning. 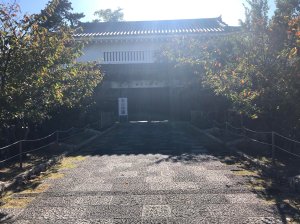 According to excavations, this castle was built in the late 15th century approximately 500 metres away from the present-day location. The castle’s five-storied keep was destroyed by lightning in 1827 but was reconstructed in 1954, and is also now used as a folk museum. 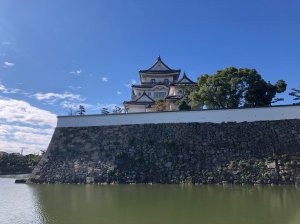 The views of the exterior were indeed fairly impressive, and often that is sufficient enough for me but not on this occasion. I will therefore have to return and next time I’ll have to make sure it’s not on a Monday!

Click here to read ‘Japan’s Award-Winning Ramen, A Rare Night Out, A Dog Statue, A Cake-Flavoured Drink & Yet Another Castle!’

Click here to read ‘Is That Another Castle In Chiba? All Is Not Quite What It Seems!’