The Keio Line principally connects Shinjuku to the western side of Tokyo with seven different lines running through to the likes of suburban city Hachiōji and the mountainous area at Takaosanguchi. All of it’s stations actually lie within the boundaries of Tokyo and, thanks to regular free tickets, Tokyo Fox has dug deep to come up with a few places worthy of visit beyond perennial favourites like Mount Takao and Tama Zoo……

Keiō-Yomiuri-Land is not only one of Tokyo’s very few stations to include katakana script in it’s station name but it is the Tokyo gateway to the theme park which gives the place it’s name. My previous visit to the station had ended in disappointment as the cave at Iko-ji Temple Benten Cave had sadly closed due to health and safety reasons. Little did I know then that over the road from there lies a cemetery and just beyond that is Arigata-yama mountain where there are rows and rows of densely-arranged little buddhist monuments. 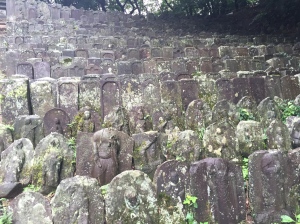 It should be noted that there are no signs for this place and it really is as hidden as they come. These group of buddhist tombstones were abandoned in the Komagome district of Toshima Ward sometime during the final few years of WWII (early 1940’s) and subsequently transported individually up to the top of this mountain by a charity group wanting to preserve them. Whilst carrying the tombstones they chanted “thankfully, thankfully” which became the origin of Arigata-yama Mountain. 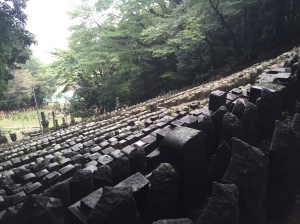 Back in the 1970’s (maybe due to its close proximity to studios belonging to Toei and Toho among others) it played its part on the small screen as it was used as a shooting location for TV shows on the world of the strange including ghost stories, historical plays and so on. 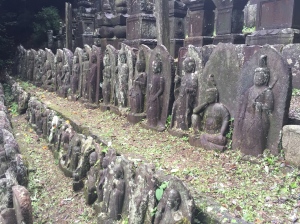 A development project has long been under way in the area and the mountain is at risk. It is said that the mountain could collapse due to it, and the lower part seems to be in danger of having a highway built over it. Like the aforementioned Iko-ji temple cave, this is also pretty much closed due to such development.