Gunma was admittedly one of those prefectures I always thought was a little bit boring but it’s good to have been proved wrong following a fair few day trips there in recent years. In these travel-restricted times I haven’t really been anywhere else, and just a couple of days after this most recent trip in the early days of January the soft lockdown (known as State of Emergency in Japan) kicked in again.

From Ikebukuro, the Shonan-Shinjuku line took me up to Takasaki which turned out to be far more than just a transit station as it was home to a platform zero, and fortunately it was located on the Jōshin Line which was what I needed to use.

There’s something slightly mystical and Harry Potter-like about platform zeros and one has to wonder why some stations have them whether it be because it’s been added on that particular side of Platform 1 or just because they began their numbering from zero! There are 43 of them in Japan across 24 prefectures and the complete list of them can be seen here.

After about 30 minutes (eleven stops) I arrived at Jōshū-Fukushima Station.

The destination was the big stone Buddha face carved into a rocky cliff-face which was a sixty minute walk directly south of the station. It is located round the back of a fairly average looking countryside temple and is a great reward for the exhausting two minute up the steps! 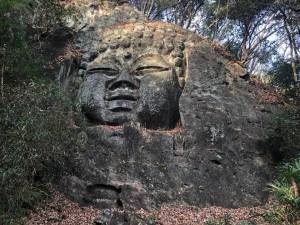 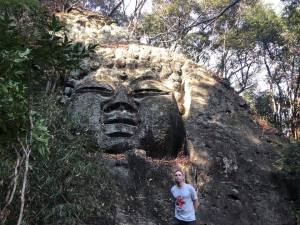 An 18 minute walk to the north of that took me through Kanra Total Park to the beautiful Rakusan-en (648-2 Oaza-Obata, Kanra-machi, Kanra-Gun, Gunma) which are scenic gardens with an undulating landscape surrounding it’s centrally located pond. 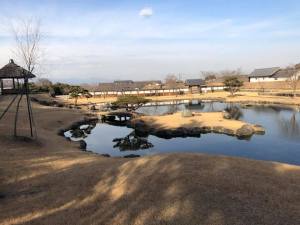 Entrance was just 300 yen and they were very different to what I’m used to in Tokyo where skyscrapers often fringe the gardens. Instead the surroundings were Mount Momiji across the Ogawa River in the west of the garden and Mount Renseki and Mount Kumakura to the south. The photo below shows the lovely view from Ume no chaya; the thatched roof teahouse on the top of a very small hill.

Between those gardens and the station was Konnyaku Park; the theme park specialising in konnyaku which is a rubbery, slimy grey jelly made from a type of potato if I can be so vague! It really is difficult to describe it though! It’s grown in tropical and sub-tropical Asia and is perhaps mostly common in bowls of oden. There is a factory (with regular workshops), a souvenir shop and outdoor foot baths but the highlight is the buffet which is completely free to all visitors. 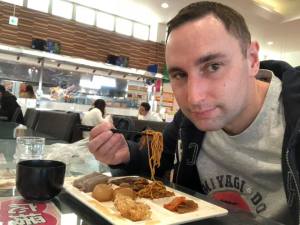 With my stomach full and satisfied, it was time to return to Jōshū-Fukushima Station and begin the long journey back to Tokyo safe in the knowledge that I had had yet another successful day out in Gunma Prefecture. I’m sure it won’t be too long until I’m back in the area to hunt down some other slightly unknown places.

Click here to read ‘The “Theme Park” In Gunma With A Sloping House, A Mysterious Cave & Not Much More!’