A couple of years ago I visited the virtually-abandoned station just over the border from Tokyo but this one is a step up from that. Or rather it is 462 steps down as this creepy underground station in Gunma Prefecture is located deep beneath the surface. 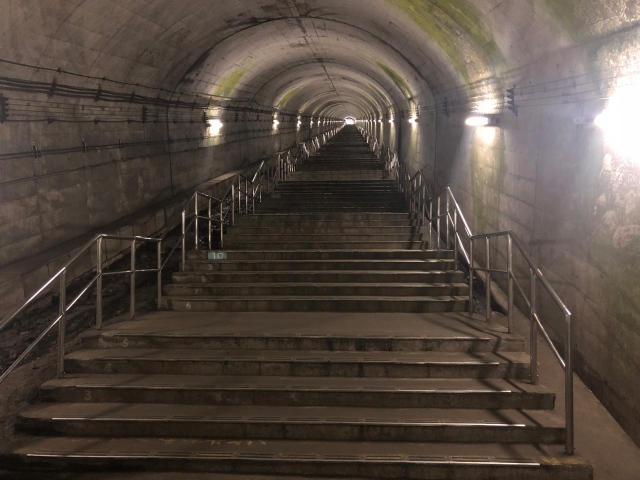 Ever since I came across a video from Lisa Sometimes (Watch it here) a few years ago I have wanted to visit Doai Station which is three and a half hours away from Ikebukuro via local trains. Quite the trek just to see the interior of a station but worth it in my opinion so off I went departing Ikebukuro at 10:18 am.. It was absolutely pouring it down with rain but that didn’t matter as I wouldn’t be going outside anyway. One man (below) seemed to think he needed an umbrella on the train though!!

Man under an umbrella inside the train!

When my Joetsu Line train arrived at Doai at 13:48, I was the only one to step off the train into an eerie atmosphere.

This unattended station is a very unusual one as the underground platform for the northbound trains to Echigo-Yuzawa is located 70 metres below ground, in the middle of a very long tunnel. 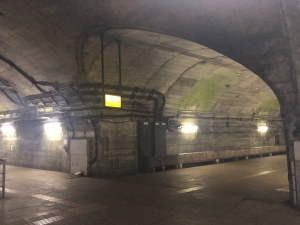 My first stop was the waiting room which was fairly run-down but what more do you need than a few plastic seats! Actually, some other amenities might be useful for anyone unfortunate enough to have just missed their train! There are a few comment books lying around for those wanting to leave a record of their visit for others to see. I couldn’t be bothered with it! 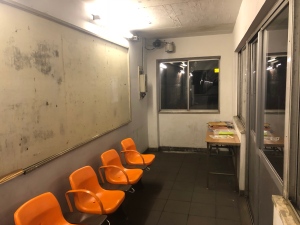 The most famous part of Doai Station are the steps leading up to the exit. There are no elevators or escalators, and a sign (in Japanese only) does warn alighting passengers of the number of steps and how long it should take to reach the top.

With steps going up as far as the eye can see, this tunnel is something of a photographers paradise and I couldn’t help but stop a few times to set up a few photos with me in. It’s a good way of taking a rest too! 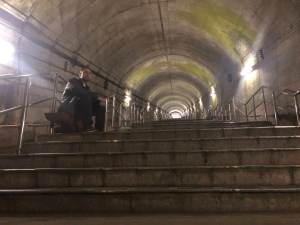 It took me about seven or eight minutes to climb the initial flight of steps but that wasn’t quite the end as there were a few more steps to come. 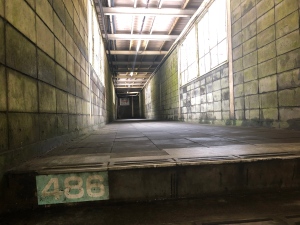 Believe it or not, this station is actually something of a tourist attraction and I wasn’t the only one inside. 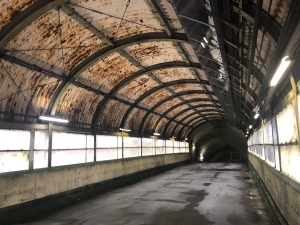 The ambience of the place was like something from a different world and heightened by the cool, dark and mistiness of it all. The sound of dripping water echoing around the place also adds to it’s appeal. 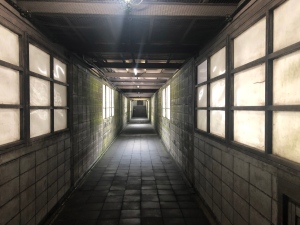 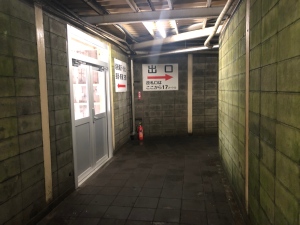 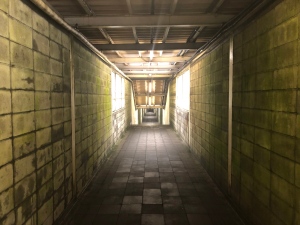 The toilets were surprisingly new rather than the dirty old-fashioned squat-style ones I’d expected, or in some way even hoped for as no-one likes to see something old ruined by an out-of-place modern part!

Remember that bit I said earlier about not stepping outside! Well technically that wasn’t true as I did exit the station to get some exterior shots. I really didn’t expect to see snow before this trip so that was quite a surprise.

There is actually a cafe in the waiting room which is presumably more to cater for the fairly steady number of non-passengers who visit Doai Station each day. 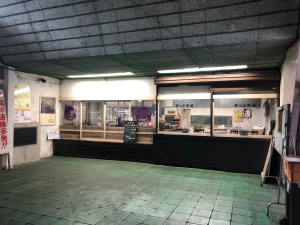 There are only ten trains passing through daily (five in each direction) so if you’re going here by train then it needs to be planned carefully. I took the train back at 15:34 so had just over an hour and a half at the station which gives plenty of time to look around.

Enter the station and the two options are going right for trains south or left to continue north. Of course the underground platform takes all the glory, and rightly so, but that doesn’t mean the other one isn’t interesting too. 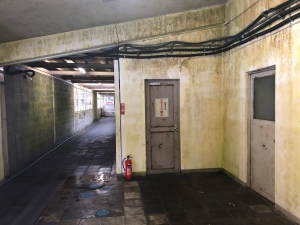 The above-ground platform for the southbound trains to Minakami and beyond is at ground level, and was the one I took to get back to Tokyo. It was a long day but one that was well worth it. 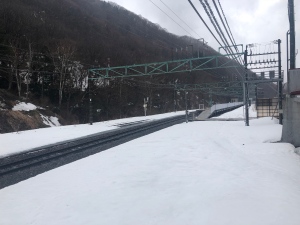 Click here to read ‘The Creepiest Buddha Statue In Japan!’

Click here to read ‘One Of The Most Dense Temples In Japan!’