One Of The Most Dense Temples In Japan! 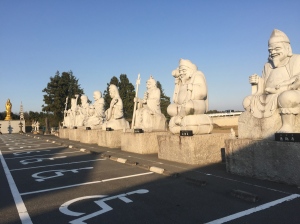 The Japanese have many customs and traditions when it comes to visiting shrines or temples and this one in Gunma prefecture helps people ward off evil during what are considered to be bad luck years known as yakudoshi. These inauspicious years are different for both men and women. For men, it’s the ages of 25, 42, and 61 and for women, it’s when they hit 19, 33, 37 and 61. Yakuyoke is the purification process at temples to help wash away yaku (bad luck) that has been accumulated over the years.

That may well be…….but it wasn’t why Scottish Neil and I visited this place between dining out at the vending machine restaurant and watching Thespakusatsu Gunma play a J2 league game. Well, he was just following me and I only wanted to visit the temple because it seemed like it was a little different to the usual ones.

The Seven Lucky Gods (shichifukujin in Japanese) are believed to grant good luck and they are represented at this shrine via these sizeable statues (below) which line up in the car park. I only saw the likes of Hotei, Jurōjin, Fukurokuju, Bishamonten, Benzaiten, Daikokuten and Ebisu at Yugawara in Kanagawa a few months ago but I’m afraid to say that I still can’t individually identify any of them!! 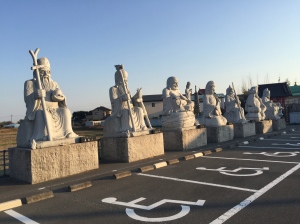 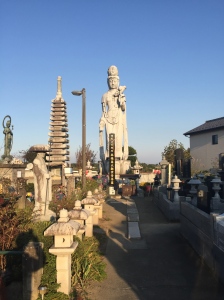 Tengu is a creature that’s a common part of Japanese folklore and they are rumoured to hang out on the peaks of Mount Takao though I’ve never spotted these ferocious masters of martial arts on any of my numerous visits to the worlds busiest mountain! The tengu at this temple is the most popular attraction and he helps you get rid of your stresses and problems. His head is hidden but he is unable to hide that big nose! According to the travel CNN site “the humble and pure of heart have nothing to fear from the Tengu, but woe betide the pompous and arrogant.”

Musubi no kami is the Japanese god of matchmaking, love and marriage and an area of this temple (below) is devoted to it with some heart-shaped ema which are the wood blocks used for writing prayer requests on. 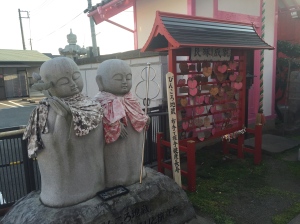 The 12 animals of the Chinese Zodiac are also represented with each one having its own statue (below) where visitors can leave coins on the rock assigned to their birth year. 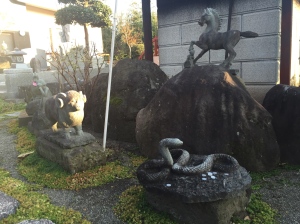 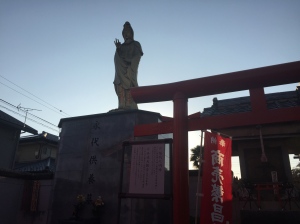 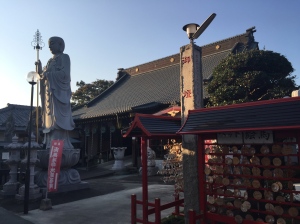 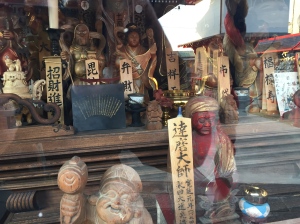 One other reason people go to this temple is to pray for safe driving hence the car shaped ema. There is even one of those cardboard cut-out things where you can put your head through (below) for a photo opportunity. I don’t think I’ve ever seen such a thing at a place of worship! 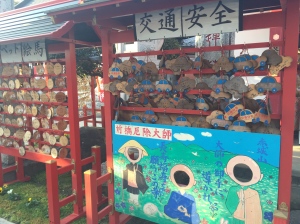 The address is Shimomasudamachi 1626, Maebashi, Gunma-ken and the nearest station is Komagata on the Ryoma Line which is a 30 minute walk away but a rewarding one as the views are very nice (above) with mountains to be seen in many directions.

Click here to read ‘Watching The Worst Team In J2 On A Cold Night In Gunma!’

7 Responses to One Of The Most Dense Temples In Japan!