There really are two different sides to Chiba, the prefecture bordering Tokyo to the east. The north is pretty much just an extension of the Japanese capital but once you venture beneath Chiba city itself it’s very much countryside. No more was that apparent than the part of Kisarazu city I was in a few months ago.

Kisarazu is the gateway to Kawasaki in Kanagawa prefecture thanks to the Tokyo Bay Aqua Line which crosses the bay (there is even a floating service station area known as Umihotaru in the middle!) via a combination of bridge and tunnel. However, this time I ventured a little east of Kisarazu to Higashi Kiyokawa Station on the JR Kururi Line. There are a few unmanned stations along this line so you exit at the front of the train and pay the driver as you disembark.

90 minutes on foot is a ridiculous distance to cover just to visit a temple but that is what I did, and on a lovely sunny Winter morning it felt nice to be wandering amidst such greenery without a soul in sight. Takakura Kannon (1245 Yana, Kisarazu-shi) had been recommended by my regular source for quirky sights and was my one and only destination in this particular area.

The temple itself is a grand structure but it’s interior is far more impressive with some beautiful wooden decor.

However, I was not there to see that. It was the “Go To Paradise & Hell World Tour” museum (300 yen entry) beneath the stilts of the main floor which was of interest to me. 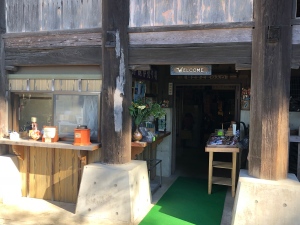 This fairly shabby-looking place is packed full of stuff including stones and statues of sexual objects which are named as “unusual gems” here! 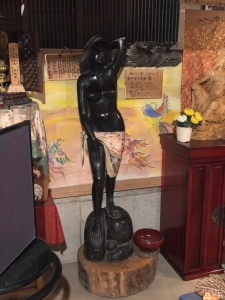 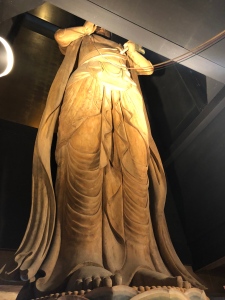 Watch the video below for a walk-through tour of this quirky museum which includes a few tightly packed rows displaying statues of various animals (white snakes, monkeys, owls, frogs, turtles, dragons, tigers, elephants, cows…) gods, kappa, skeletons, figurines, paintings, flowers, secret buddhas and treasures that can supposedly not be seen in other temples. It all felt very much an indoor version of the dense temple I visited in Gunma prefecture in 2017. It should be noted that there is no information in English at all.

The outside of the temple, which actually offers funerals for pets, featured a few owl statues which was something a bit different from the usual kitsune (fox) and lion-dog ones that are common place at temples and shrines.

On my exit from the place I noticed the Godzilla figurine (standing in front of the maneki neko ones) on a table just next to the fortune paper drawers. Around the corner from there were some more fictional characters albeit animated ones.

Luckily I timed my departure from the temple well as I was able to catch a bus back on the main road that took me all the way to Kisarazu Station thus saving me a lot of time as I didn’t have to walk another hour and a half back and then wait for the hourly train! About a kilometre walk from Kisarazu Station is Toriizaki Seaside Park which was my next destination.

I’m not sure what it was all about but these animation-style statues were dotted about the place.

As I wandered towards the footbridge I came across Yumi Katsura Lover’s Sanctuary. I was quite surprised to see a message in English on the sign under the big heart. It reads “Here I declare this land as Lover’s Sanctuary to impart the joy and the magic of encounters, blissful marriages, and raising a happy home. I send my blessings to your encounters and wish you a wonderful future.” Having just had a quick look on the internet, it seems that such sanctuaries are actually quite common in Japan with mentions of similar ones being in Hiroshima and Osaka among other places.

I had pretty much given up on finding the playground structure that I wanted to see but my determination and intrigue saw me cross the road to have a quick look at a green area. I was delighted and relieved to discover that this was the place I had been looking for. Those positive adjectives of emotion soon turned to slight disappointment when I saw what it was. 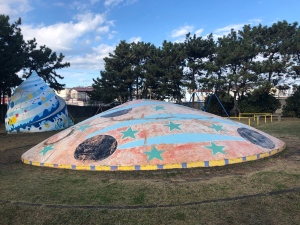 I think the two main features are supposed to be seafood related. The flat one is a shellfish I guess and the other is maybe a snail although it looks more like an ice-cream scoop to me! It is rumoured that the door on the back of it is actually the entrance to a nuclear shelter! 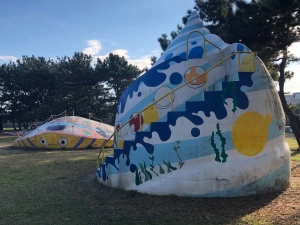 Just beyond that were some kind of Japanese performance art statues.

Despite the remoteness of the aforementioned places in Chiba, it was actually back within the Tokyo boundaries that I was first isolated on this day as I had the train carriage all to myself towards the start of the journey on the Sobu Line between Akihabara and Kinshicho. Such a thing is very rare so when it does happen I tend to take a selfie!

Click here to read ‘Tokyo Daytripper: The Floating Service Station In The Middle Of Tokyo Bay’