Abukumua Cave: A World Of Fantasy Beauty Created A Long Time Ago

To the best of my knowledge, there are nine Stalactite caves in Japan and they are all fairly spread out. The limestone cave of Akiyoshidou in Yamaguchi Prefecture is the only one I’d visited before taking this trip deep into Fukushima. However, these caves were never actually part of my itinerary until a couple of days before when I realised I could squeeze them into my schedule. 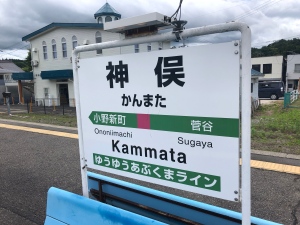 As it was, I actually had a bit longer than expected in Kammata as my time at the area around the next station along (Onnonimachi Station) had been shorter than anticipated due to acquiring my own wheels and so I repeated that same trick here too. Yet again the uphill parts were impossible on such a cr*ppy machine so I had to push it up to the top but I was certainly looking forward to the descent once I’d finished at the caves.

The Star Village Observatory could be seen on top of the hill next to the ring road structures. When I finally got to the top I was confronted with an almost empty car park surrounded by mountains, greenery and limestone.

Entrance was 1200 yen which was admittedly more than I’d like to have paid for such a thing but I wasn’t going to stubbornly refuse to cough up when I’d made so much effort to get there. The temperature outside was 22.5 degrees celsius but inside the cave it was a cool 10.3 degrees.

This natural sculpture is reported to have been formed over a span of roughly 80 million years and I pretty much had the whole thing to myself as I never saw anyone else for the hour or so I was there.

As is the norm in caves there are all kinds of nicknames for different parts which slightly resemble other things like mushroom rock, the crystal curtain, cave shield and Lunar World. The first photo below is known as Monster Tower and the one after that is the Christmas Tree! Make of them what you will! 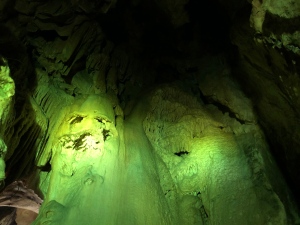 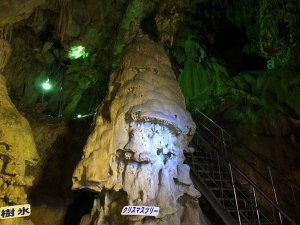 The first time I encountered a Yumi Katsura Lovers Sanctuary was near Kisarazu Station in Chiba last year and my subsequent research on the subject showed that there are a fair few of these things throughout Japan. With that in mind, it wasn’t such a surprise to encounter this one although it’s location in a cave is probably quite unique.

Beforehand I was well aware that cave pictures are not usually so good and I said to myself that I’d only take a few just for the sake of this blog post. However, I still ended up taking more than I’d ever need and believe it or not, the ones included here really are the best of the best! The Takine Palace was perhaps the highlight and it was basically an expanse of stalactites looming down from the ceiling and stretching back fairly deep into the caves. 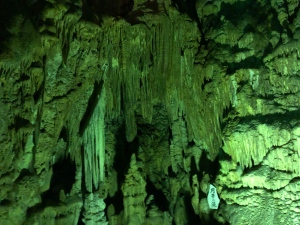 Many of the sculptures  have been created by the corrosive effects of the underground water dripping down. Coins presumably interfere with such developments as there was a sign asking people not to throw money in in order to preserve the limestone of the cave which is registered as a natural monument.

There are actually some other caves in the area as I was slightly confused when I arrived at Abukuma Cave and saw a sign for Irimizu Limestone Cave (I wasn’t too aware of either name at the time!) which was five kilometres away. I thought I had maybe gone to the wrong place but it is different and is supposedly a more adventurous place as visitors can experience some kind of genuine caving adventure there.

Back at Kammata Station, I returned to Koriyama and then continued on to Yonezawa to experience a couple of days in Yamagata Prefecture for the first time.

Click here to read ‘Yamadera: The Mountain Temple That’s Reminiscent Of One From A Batman Movie’

Click here to read ‘In Search Of A Spider-Man Statue In Fukushima Prefecture!’

Click here to read ‘Hiking In Fukushima Pt I: Jyododaira’

A Leicester City fan teaching English in Japan
View all posts by tokyofox →
This entry was posted in Japan Travel and tagged Abukuma Cave, Ban'etsu East Line, Irimizu Limestone Cave, Kammata Station, nine Stalactite caves Japan, The Star Village Observatory, things to do in fukushima, what is the temperature inside Abukuma Cave?. Bookmark the permalink.

1 Response to Abukumua Cave: A World Of Fantasy Beauty Created A Long Time Ago