An Epic Journey To See The Temple With Hundreds Of Unique Faced Statues And TV Cameras Were There To Film Me Too!

Statues are common features of temples and shrines in Japan but this one, deep in Japanese countryside, has close to 500 where no two are the same.

The day began by taking the 8:00 am Ban’etsu East Line south-east of Koriyama to Ononiimachi Station. I had anticipated a 100 minute walk (one way!) to the temple I wanted to see. Many people will think that’s madness but I accepted it as the journey is all part of it for me. Sometimes you’ve gotta make the effort and being a resident of this country does mean that I am not constrained by time limits too much so in this case could devote a big part of my day to this place. However, I was still recovering from a calf problem so was keen to find an alternative way of getting there and inspiration hit me just moments after leaving the station.

In the car park by the station was a bike shed and at the back of it were a fair few abandoned bicycles. I checked the tyre pressure and it seemed reasonable so I pulled away all the grass that had grown pretty much through the bicycle and was soon on my way. For the record, I did return the bicycle to the exact same place not that that will really justify my actions in the minds of some people!

It’s a fairly straight and flat road all the way until the turn-off point (marked with a sign and a few little statues) where it’s a pretty steep winding climb up the mountain to the temple. In total it took me about 40 minutes to get there as I had to walk the final part as going just slightly uphill on such a bicycle was nigh on impossible!

It is officially known as Todosan Manpukuji Showa Rakan and on seeing the map I was not impressed as I really hadn’t anticipated this temple being on a mountain side with steps leading up to it. There was a taxi driver waiting outside the temple who spoke to me and was surprised that I’d got there by bicycle. He mentioned something about a drone but I didn’t quite catch what he was on about. I would soon find out though! 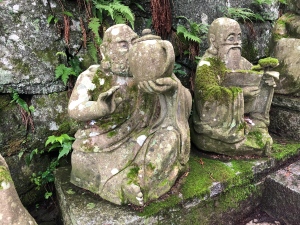 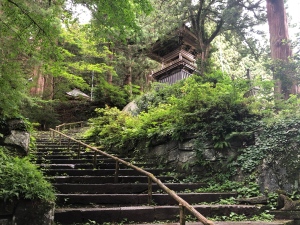 It didn’t actually take that long to ascend the mountainside which has statues scattered throughout. The conversation with the taxi driver was in Japanese but he had said 50 minutes in English when I asked how long it’d take to climb. I really should have confirmed in Japanese really as of course he meant 15! 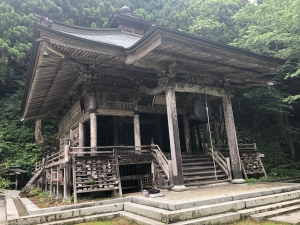 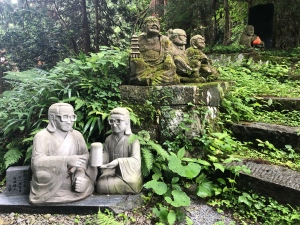 The final set of steps led up to a tower and the temple itself soon followed after that. The most interesting thing to see though was just beyond that where hundreds of Showa Rakan are sprinkled throughout the cedar trees. These rakan-sama are disciples of Buddha’s and it quite the spectacle. 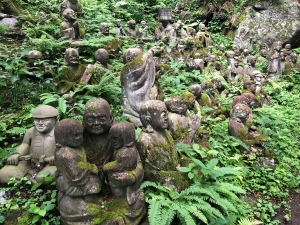 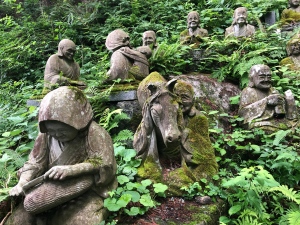 It soon became apparent what the taxi driver had been on about as there were three other people present. They just happened to be from Asahi TV and were filming (hence the drone!) for a programme. Having taught a couple of people from that station in the past, I was quite excited to talk about some stuff with them. They were quite surprised to see another visitor, particularly a foreign one, at this weird temple in the middle of nowhere. 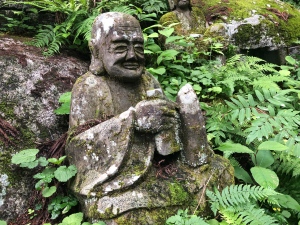 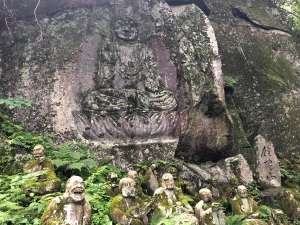 They said they wanted to film me walking around the place and just acting naturally. An interview then followed and loads of questions were asked about how I knew of this place, my favourite statue, how the place made me feel and so on. I was told it would air on ‘Nanikore Chinhyakkei‘ on Sunday 21st July at 7pm Japan time on TV Asahi. My answers were really poor to be honest and they’ll have had a hard job editing a decent segment together involving me. Hopefully I don’t get stitched up too badly and made to look a fool! 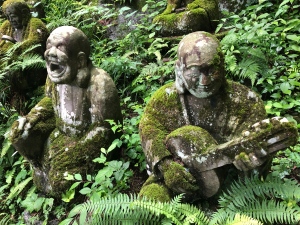 Although Todosan Manpukuji Temple has a long history dating back to the early 9th century, the rakan statues are actually just over a few decades old. They began to be added to the temple in 1985 and each and every one of them has a unique and distinctive quality to it. Such statues are often seen all over Japan but it’s rare to see this many together and I did find it all a little overwhelming. 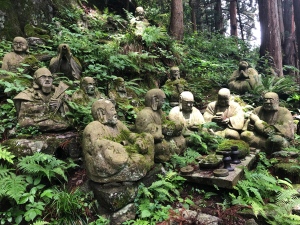 It costs $2000 to make one and anyone can request and design decide on the unique characteristics themselves. They are made for good fortune and some of them were brand-spanking new whilst others were covered with moss. 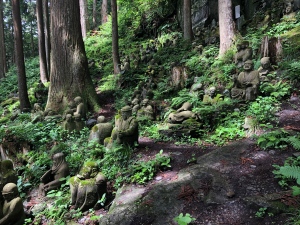 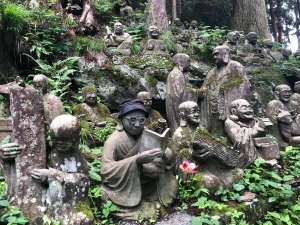 Back near to the station was this castle (below). My advisor for many of these trips actually told me about this place last year when I was travelling through Fukushima. I’d completely forgotten about it though until I saw it on my maps app. Rika-chan is Japan’s most famous doll and this place includes a factory and a museum among other things. I never had any interest in going inside (it’s 700 yen entry by the way) but it was interesting to see such a structure in the middle of countryside like this but I’ve been in Japan long enough now to not even be slightly surprised by such quirks!

Interestingly enough, trains going south from Ononiimachi to Iwaki are very rare and there is even a period of five hours during the day where no trains operate. Thankfully I was going in the other direction albeit just one stop back up the line to Kammata Station which was home to my next place of interest. 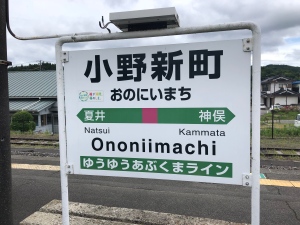 Click here to read ‘Abukumua Cave: A World Of Fantasy Beauty Created A Long Time Ago’

3 Responses to An Epic Journey To See The Temple With Hundreds Of Unique Faced Statues And TV Cameras Were There To Film Me Too!