Watching The Worst Team In J2 On A Cold Night In Gunma!

The idea of travelling over 100 kilometres north to watch a team rooted to the bottom of J2 play against a team floating in mid-table nothingness is probably not too appealing for many. However, with games running out this season it was one that Scottish Neil and I were keen to attend and thus tick another stadium off the list. Of course there’s next season but there’s no time like the present!

As with many other stadiums in Japan, this one has a fairly ridiculous name courtesy of a Soy sauce maker; the Shoda Shoyu Stadium Gunma! The team name is a bizzare one too and only very recently did I finally understand the simplicity of it. Three words have been pushed together to create Thespakusatsu or The-Spa-Kusatsu if you prefer. The area of Kusatsu is renowned for its hot spring resorts and is probably the most famous sight in Gunma prefecture. Why the team wants to use a word like “the” is a mystery to me given that Japanese people generally have trouble pronouncing the ‘th’ sound which instead sounds like “za”.

The nearest station on the map was Gumma-Soja but it turns out that maybe Maebashi is the best station to use. Ahead of a 7:03 pm kick off (yes, really!), we got to the station at 5:30pm and stepped outside expecting to see a bus or two shuttling fans off to the stadium. However, there were no supporters whatsoever! We thought there was maybe a bus at 18:10 but wasn’t confident about that or how long it may take to get to the ground. There were also some taxis but, fearing we may have to take a take one after the game, didn’t want to pay for one both ways so ended up taking the 45 minute walk. Armed with a convenience store beer and our map apps we set off and the first part of the walk was along some very dark backstreets where we actually needed to use our phones to light the way! 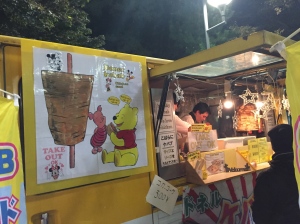 Whenever the Rambling Northerner was with us on such trips he would inevitably end up getting a photo taken with some big furry friends. With him having departed Japan for the quiet life in northern Spain, I paid homage to him by getting my picture with Yuuto the mascot when we arrived at the stadium.

Just before entering the stadium earlier, we got talking to an eccentric local guy called Tadashi (below) who wanted to try his English on us. He asked where our tickets were for and it appeared that they were along the same side as him so we ended up going in with him and sitting together as sometimes you’ve just gotta go with the flow and see what happens. We’d paid 2300 yen for such seats as it was yet another ground with a running track going round which put us off going behind the goal which is usually the most atmospheric area. 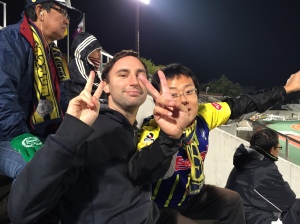 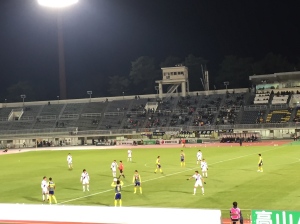 Tadashi’s English was probably a weak pre-intermediate level but if I was giving him a demonstration lesson I’d definitely tick the confidence box as a positive! He had lived in the UK for a bit in the past and had obviously picked up some bad language. For some reason he chose to shout at the players in a mix of Japanese and English with the latter obviously for our benefit not that we wanted it. Not only did he used the F-word a fair bit but his response was very natural as he said many times “Excuse my French!” 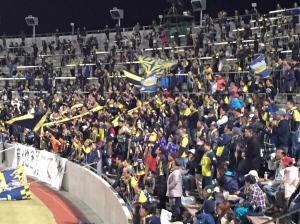 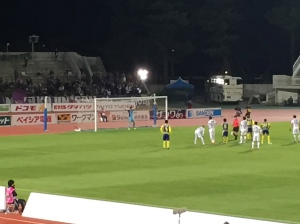 Kazuma Takai stroked home a penalty (above) on 23 minutes and I really thought that the home team’s luck was about to change but the inevitable happened on 85 minutes when Masashi Oguro headed home the equaliser less than a few seconds after I told Neil that it would be 1-1 soon. Mystic Tokyo Fox!

On our arrival at the stadium we had immediately enquired about the bus times for after the match. There was only one at 9:10pm and that was going to Maebashi station. That was ok but would have still meant waiting around for 20 minutes in the cold and then being packed in tightly for about 30 minutes. We had decided during the second half that we’d probably have to walk back too but then Tadashi came to our rescue. He offered to drive us to Maebashi as it was on the way to where he lived. He even offered us a place for the night though I don’t know how his wife would’ve felt about two foreign strangers turning up unexpectedly!

Shoda Shoyu Stadium Gunma has a capacity of just over 15,000 but just 2,912 were there to see this adequate match on a cold night in Gunma. This 1-1 draw won’t live too long in the memory but one member of the crowd will not be forgotten anytime too soon. Admittedly we were a bit wary of Tadashi at first but that eventually turned into acceptance, affection and respect as we drove to the station with German metal band Rammstein blasting out!

9 Responses to Watching The Worst Team In J2 On A Cold Night In Gunma!