As mentioned in the prelude, station ‘B’ was a bit of a problem in that it was completely out on a limb compared to most of the other stations but it had to be done and so we left the Ginza and Hibiya district behind to head for Bakuro-Yokoyama where we had a short lunch break at Matsuya for a very cheap beef bowl dish (only 250 yen at that time) and then it was off to the Iidabashi district where a few stations needed to be checked off. 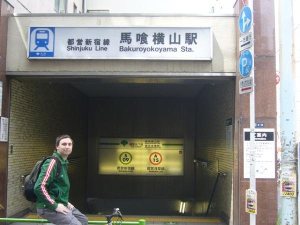 Before that Michael said we should stop at Otemachi for another ‘O’ stop as its the only one to have five metro lines going through it. 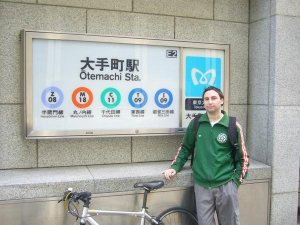 Jimbocho, Ichigaya and Yotsuya soon followed with the latter two being the only JR (Japan Railways as opposed to all the other private Metro ones) stations on the journey. This wasn’t really an issue for me. I just thought it more interesting to have a photo taken outside a proper station rather than the typical Metro station with its steps leading down underground. 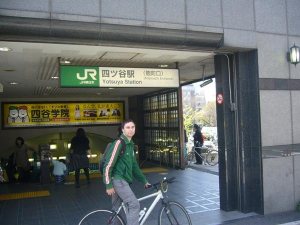 As we rolled along the riverside into Ichigaya we could see many people fishing for fun at a place which featured in a BBC programme about Japan early last year. It’s one of those places where you pay to fish and then put them back in for the next customers to catch. Tranquility and peace and quiet are supposedly the order of the day but that looked hard to imagine with so many people there and trains going by every few minutes next to the place. I also wanted Yotsuya included as I was working there this month on Tuesdays.

Ushigome-Yaniguchi was unknown territory for both of us and was a tiny station in a quite difficult to find area and as we took some backstreets from there to Waseda just before 2pm the journey was starting to take its toll in terms of all those hours sat on the saddle if you know what I mean!

The only ‘Z’ station that I was aware of was Zoshigaya which is where I used to live for a few years and so that was quite nice to return to that area for the first time since I left. From here on all the stations were personal to me and it was me who was in charge of naviagtion for the first time. Kishibojin-mae is just a stone throw from my old house and was a bonus ‘K’ station and the only streetcar one.

The final straight was indeed a straight; the main road known as Kawagoe-kaido which I live on. I have never been stopped by the police on this road even when riding late at night without lights and listening to my iPod and less than a second after saying that to Michael we were stopped by a policeman who felt a desparate need to stop two foreigners to check if their bicycle codes matched the correct registered owner. This is basically what the police do in Japan and to top it off many Japanese cyclists pedalled by without problem whilst he checked our details.

I worked in Tokiwadai for 4.5 years before bowing out last September so that was next and was one of our longest stops as I had to wait a while for a delivery truck to move away from where it was parked in front of the station entrance. My home station Kami-Itabashi soon followed and the last two stations; Chikatetsu Akatsuka and Shimo Akatsuka brought the A-Z journey to an end at around 4pm. 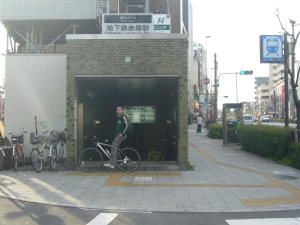 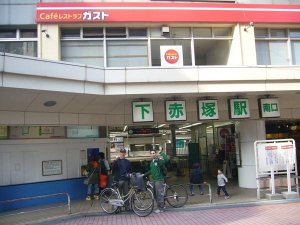 Of course I had to cycle back to my house where we had a couple of celebration beers and then Michael had to get all the way back to Meguro. Almost nine hours in the saddle and mission accomplished and time to think of another bicycle challenge.

‘Cycling The A-Z Of Tokyo – Prelude’ can be read here.

3 Responses to Cycling The A-Z Of Tokyo – Part II