No Staff. No Scanning. It’s The A.I. Convenience Store In Tokyo

Japan has something of a reputation overseas as being a technologically advanced country. It’s generally not true though as it still uses fax machines, has limited ATM hours, a reliance on paperwork, hanko stamps (rather than signatures) and cash is still very much king! Coronavirus has actually helped shift things a bit as people try to eliminate risk by not touching cash. That is very apparent at this station shop.

Every now and then something comes along which seems quite advanced and that was true when Takanawa Gateway Station opened in March last year to become the first new Yamanote Line station in nearly 50 years. Within a week or two this A.I. convenience store opened.

I can’t say I was ever too bothered about paying a visit to it but a Taiwanese student and I ended up talking about it one lesson back in October. She suggested going there after our lesson one week as it’s location is just a slight detour from where we do our lessons. It also wouldn’t cost anything to get there as it’s situated within the ticket gates.

Take the escalators up from the Yamanote Line and you can a black, white and yellow comic strip on the window, and that is the unnamed shop which is actually not open 24 hours a day as one might have expected. It’s open for business between 7am and 9pm meaning that, unbeknownst to us, we must have just made it in time. 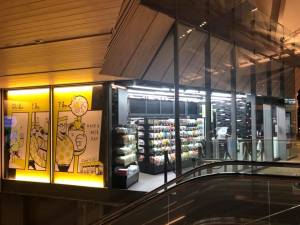 It was my first time to return to Takanawa Gateway Station since the opening day on March 14th. The A.I. shop is situated amidst the beautiful wooden architectural exterior designed by renowned architect Kengo Kuma who was also responsible for the New National Stadium which may be used in this years rescheduled Olympic games.

In we went and I eventually picked up a bottle of water, and did actually film the procedure but it took me so long at the checkout to work out what to do that I decided to try again! So out I went and then back in to try and record a smoother transaction which is the one you may have already seen in the YouTube video embedded at the top of this post. As a result I then had two bottles of water which I really didn’t want or need!!

There are fifty cameras in this 60m² shop, and only when payment is complete does the little gate open to let customers out. Once you get used to the system it really is very simple and easy. It was quite fun trying it all out but I do worry about there being a lack of jobs in shops in the future as many others may follow suit and become unmanned to save on labour costs.

1 Response to No Staff. No Scanning. It’s The A.I. Convenience Store In Tokyo