It has become something of a tradition in recent years to have an annual meeting or two with former colleague George. The majority of our meet-ups have been food related (train themed curry, happy rainbow ramen etc), and this one was too but after we’d had lunch at the unique cafe between the train tracks in Akihabara we took the Metro to Akebonebashi Station on the Shinjuku Line for something more adventurous.

There were a couple of bouldering places in the area but we decided on the the not-so snappily named Rocky Climbing & Fitness Gym Shinjuku-Akebonebashi which was a short walk up the hill! Naturally, the famous theme music from ‘Rocky‘ (1976) entered our heads as we approached the building but would it energise and inspire us to quite literally climb to new heights on what was to come?

Inside there was a quick sign-up to be completed online folowed by a scan of the QR code which was produced and that was it. This is more like it Japan. All too often in this country though you have to complete stuff by paper! The cost was just under 2000 yen for the whole day which is actually cheaper than what I paid in Kokubunji  the last time I did such an activity 15 years ago!

There was a compact changing room to get ready and put our goods in lockers, and then we had to get the right-sized climbing shoes fitted which inevitably led to some childish jokes about which one of us had the biggest feet and what that all meant!

Taking pictures in the toilet is not something one likes to get in the habit of doing but when I saw this sign (below) I whipped out my phone to snap the sign telling patrons to always sit down when using the toilet. I am no stranger to the lazy pee though so it was kind of normal for me! Too much information??

After a quick instruction video explaining (only in Japanese) a few rules we were finally ready to go. 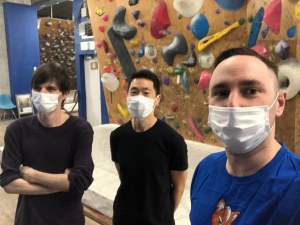 The reason for the cheaper price in comparison to my 2007 climb may be due to the walls here not being so high at all. That doesn’t mean it was easier, and we later decided to make things a bit more interesting by just sticking to one colour of the small rock formations on our ascend up the wooden panel walls. 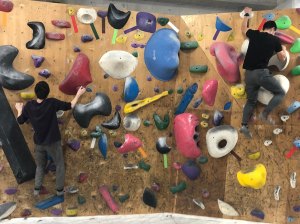 The thing with bouldering is that it looks quite easy but the differing sizes and shapes of footholds and handgrabs (I’m not sure what the official term is!) make it not so straightforward as there are times when you just can’t get your hand or foot comfortably on to the rock formations. Having said all that, I did manage to get directly to the top (using any colour!) directly and easily on my first attempt. It really was over all too quickly and I didn’t really know what to do once at the very top and gripping on to the wooden wall! 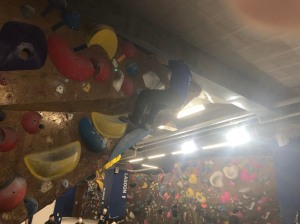 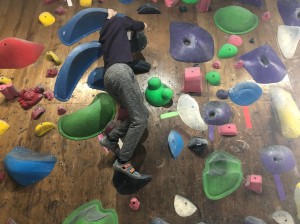 Of the three of us, James was the best (or certainly the most adventurous!) with me in the middle and George, who came up with the idea of going bouldering, bringing up the rear! He just couldn’t get to grips with it and struggled to get off the ground. You could say he hit rock bottom but I guess he can only go up from there! 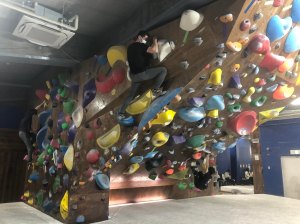 Attempting to take different routes to the top of the wall was initially fun but did get tiring on the body. Bouldering on certain gradients needs a fair bit of upper-body strength which I just don’t have! I also didn’t want to injure myself from falling on to the crash mats which weren’t quite the thick and comfortable ones I remember back in my school days! This activity is not for the timid and being a little brave just isn’t enough. You really need to be boulder!!

Our entrance cost may have allowed for a whole day of climbing but I’d had enough after a couple of hours if not sooner than that. I used to love rock climbing as a child but these days the art of bouldering isn’t for me. I’ll probably try it again one day though but it can’t be another 15 year wait! 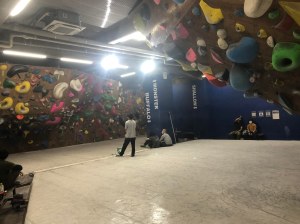 Click here to read ‘Climbing To New Heights In Kokubunji’