34 Degrees Celsius! Not Ideal Weather For Cycling To Kawagoe (& Back!) But That Is What I Did! 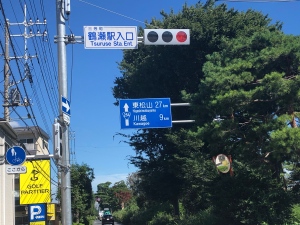 July was a terrible month in terms of the weather with rain pretty much every day but it certainly warmed up towards the end of the month. It was a scorcher on the day I decided to do this bike ride. Not the conditions I’d have hoped for but I was keen to get out on one of my days off having hardly left the sofa on previous weeks when not at work!

Kawagoe, which is known as Little Edo, is a place I’ve been to many times. It has featured on Tokyo Fox a few times (not for a long, long time though!) but those entries are pretty poor to be honest and don’t show off too much of the city. Wanting to visit it again, I decided to cycle there as it’s a fairly easy route. Just go straight for ages and you’re there! The distance (about 30 kilometres each way) seemed reasonable too as that’s just a little more than I do on a return trip to Shibuya for work.

With my arms, face and neck smothered in sunscreen, I left the TFGOC at 7:45 am and actually pushed the bike to Kawagoe-kaido Road to begin the one-road journey in proper fashion. The moment I sat in the saddle, I felt discomfort as I had cycled to and from work the day before. Thankfully the pain soon numbed itself away!

It was not long at all till overhanging bushes were interfering with my path to the side of the road which is not so good when there’s a big truck coming up alongside you. Manholes also provided something of an obstacle on occasion as the area around the edge hasn’t always been filled in properly which made for a bumpy ride over them.

My hit-and-run accident early last year proved to pretty much be the end for that bicycle even though it didn’t actually get damaged on that occasion. Eight months after that and I got a new bike courtesy of my friend Matt which I have used a lot albeit only for work purposes. This was the first major ride to do on it and Kawagoe was the destination for one of the most basic and (literally) straightforward bicycle rides. The first place of vague interest was the Japan Ground Defense Force (JGSDF) PR Center (below) which was further away than I remembered from my ride there 12 months earlier. 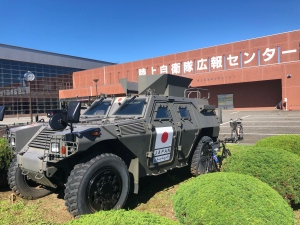 I’m not a fan of cycling on the pavement but I am a bit more cautious these days and sometimes use them. It may not look like it but this particular one (below) was very narrow with overgrown bushes slightly intruding on my person as I sped through. 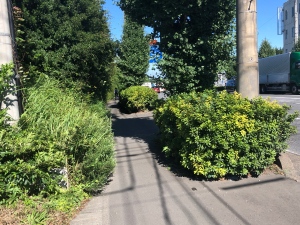 With just under 10 kilometres to go, I must’ve turned off at the wrong point and had to use this bridge (below) to cross the road in Niiza. A bit of a pain but I had plenty of time so it was Niiza here nor there!!

As I closed in on Kawagoe, I took a little detour near Kami Fukuoka Station to visit a toilet block in Fukuoka Chuo Park. Yes, you heard that correctly. The thing is, I didn’t even need to go! This one looks (below) like a Shinkansen (bullet train) and is actually a place I visited about three years ago. I have had pictures of this place in a draft for Interesting Japanese Playground Structures but have yet to post it as I’m not too sure if it really deserves to be included. It’s more park than playground I think!

Soon after that I was in Kawagoe City but this sign (below) proved to be a little deceptive as it was still a few more kilometres to the station area which I considered to be the true arrival point. Not much further really but the kilometres feel long when you’ve gone that far! 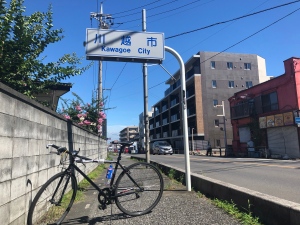 I even passed a sign for Kawagoe Aquatic Park which is a place I had completely forgotten about but one that I did visit a decade ago. In comparison to the initial stages of this ride, the bicycle lanes were nice and spacious up in this particular area of Saitama Prefecture. 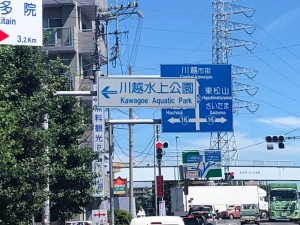 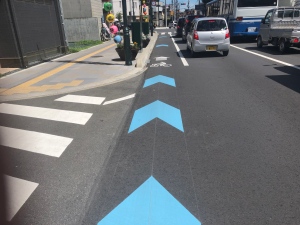 After just under two hours of cycling I finally located Kawagoe Station which is one of three stations in the area. Trying to get a photo of my bike outside the station was not as easy as you’d think as the exits (where the sign frontage is) aren’t at ground level. Consequently I had to carry my bike up the steps and wheel it to the exit in the name of getting the thumbnail for this post as well as a selfie showing off my glowing forehead and windswept hair! 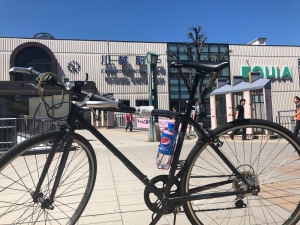 In the previous decade, I have done over a dozen themed cycle rides around Tokyo which can make for interesting map graphics. Not this time though as you can see below!

After just over three hours cycling around some sights in Kawagoe (Click here to read ‘Tokyo Daytripper: Purple Noodles, A Tunnel Of Stunning Wooden Ema & More Unique-Faced Statues In Kawagoe’) I decided it was time to head back. I knew the ride home would not be anywhere near as nice as the one going there earlier but that’s the nature of such expeditions. The getting-there part is fresh and full of hope and excitement but the return really is not fun at all…even with photo-stops like the two below which I had noticed on the outward journey but was on the wrong side of the road to capture well.

The heat started to effect me a bit so I decided to take a break at the comically-named Hard Off (below) around the half way point. A bottle of Pocari Sweat was washed down in no time at all and I fueled-up on some chocolate before taking a look at a fairly vast range of Star Wars goods in the Hobby Off part of the store. 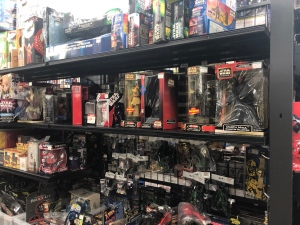 It was a never-ending cycle of despair after that as I cycled through nondescript areas. It was such a relief when I was back in familiar territory around the Narimasu area. A thrilling downhill surge took me there on what was the greatest part of the return journey. I was gonna relax in Hikarigaoka Park (below) for a bit but decided against it due to all the creepy crawlies which I hadn’t thought about. 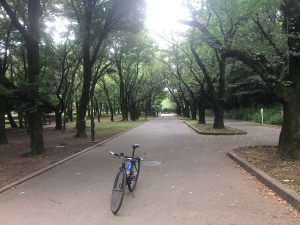 There was to be a final bonus detour to Tokyo Daibutsu (below) which is a kilometre east of Shimo Akatsuka Station. This is something of a hidden gem and it is actually Japan’s third biggest buddha statue.

I suffered a bit of pain in my thigh when I got to the buddha but it thankfully subsided within a couple of minutes. However, moments after leaving that place I had to stop and lie down by the side of the road for about 5-10 minutes as my thigh muscles were in absolute agony which may have been because I didn’t stretch properly before my departure from Kawagoe. Eventually, I was able to get back in the saddle and cycled on to Tobu Nerima past this place (below) which doesn’t exactly have the snappiest park name!

Just beyond that was this playground structure which always used to remind me of the desert planet Tatooine (from Star Wars) whenever I passed it en-route to the Aeon Cinema complex near Tobu Nerima Station. Many years before the introduction of the ‘Interesting Japanese Playground Structures‘ series on Tokyo Fox, I did actually include this in a blog post but I deleted it a couple of years ago when cleaning up the site of some really terrible posts!

The return journey took about three hours (including stops) and I was so relieved to get back and take a nice bath. So that was the long version but in short this post could probably have been summed up as “man gets on bicycle and rides straight for a long, long time”!!

Click here to read ‘Tokyo Daytripper: For Fox Sake! Not Another Trip To Kawagoe!’ (2011)

A Leicester City fan teaching English in Japan
View all posts by tokyofox →
This entry was posted in Cycling, Japan Travel and tagged cycling in japan, cycling to Kawagoe, Hikarigaoka Park, how to get to kawagoe, kawagoe, kawagoe kaido, Nerimakuritsu Denshanomierukoen, Route 254, things to do in Saitama, Tokyo Daibutsu In Shimo-Akatsuka. Bookmark the permalink.

5 Responses to 34 Degrees Celsius! Not Ideal Weather For Cycling To Kawagoe (& Back!) But That Is What I Did!