Return To Sendai…But This Time To See A Live Match & Not Just The Stadium!

On my first trip to Sendai a few years ago I actually went to check out the Yurtec Stadium early morning whilst my wife had a lie-in. I vowed that I’d return one day to actually see a game featuring the home side Vegalta Sendai. Three years later and that wish finally came true just one day after a very wet match for my Reysol boys up in Yamagata.

Local trains from Yamagata to Sendai only take about an hour so I decided to take a slight detour on my return to Tokyo to see a J1 game in a city which I visited a couple of times last Summer. Consadole Sapporo were the visitors for Sendai which gave me the chance to actually see an English player. Whilst with Championship side Cardiff, Jay Bothroyd became a one cap wonder for the England national team as he appeared as a second half substitute against France in 2010. He has been playing in Japan since 2015, first with Jubilo Iwata and is now in his third season with Consadole.

Izumi-chuo Station on the Namboku Line is the closest station to the stadium and, unlike on many other ground-hopping trips, this one was actually very convenient for walking to and from it. It took just seven minutes on foot and surely has to be one of the nearest stadiums to a train station in Japan. 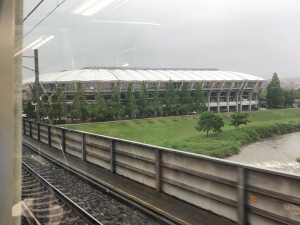 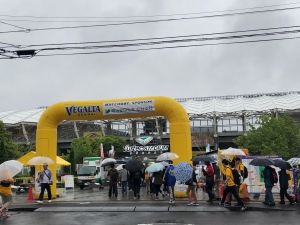 It was another wet evening but nothing like the previous night in Yamagata. This was a proper modern football stadium so it was comforting to know there would be a roof above for protection from the elements during the game. The mascot by the way is a golden eagle inspired by Greek mythology. He’s called Vegatta and is believed to be a favourable omen for victory. 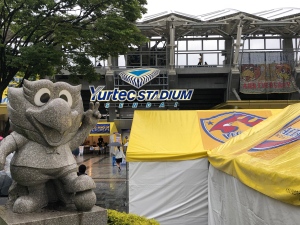 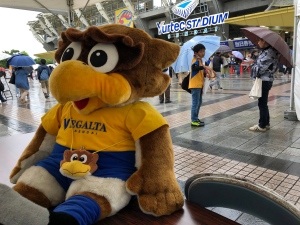 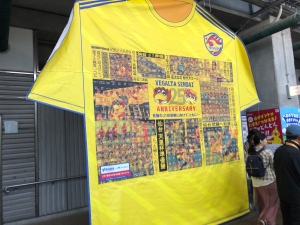 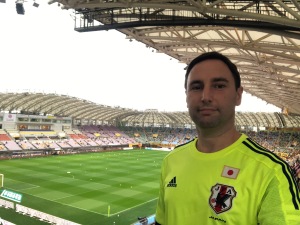 Consadole started the better but Sendai managed to contain them and then opened the scoring on nine minutes with a header from this very corner (below). The away team were back on level terms on 34 minutes as the first half ended all-square. 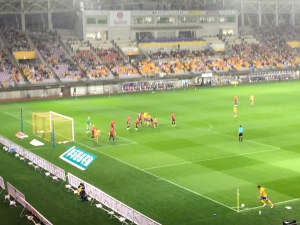 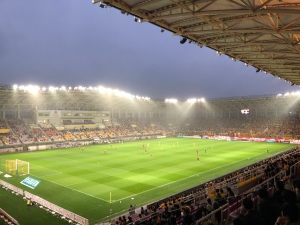 Monkey Majik appeared at half time and they are one of very few Japanese bands that I know of although that may be due to them having two Japanese-speaking (and singing!) Canadians in their line up. They performed their single ‘Umarvelous‘ (a combination of umai and marvellous) and were interviewed briefly.

It was the respective goalkeepers who caught my attention in this match. The Vegalta number one Daniel Schmidt was on top form and pulled off a couple of crucial saves including a truly outstanding one. Both can be seen in the highlights reel below. It turned out to be Schmidt’s last game for the club, and indeed his final game in Japan as just a couple of days later he transferred to the Belgian league.

At the other end, the Consadole man between the sticks was something of a sweeper-keeper who just loved to venture out of his box. There were a couple of moments when, with better accuracy from the home team, he really should have been lobbed from long range. He got away with it but wasn’t so fortunate in the 63rd minute when he momentarily lost control and, with the opposition striker breathing down his neck, his panic pass was a little wayward. It got intercepted and led to midfielder Kunimitsu Sekiguchi putting it into an empty net from 20 yards out. 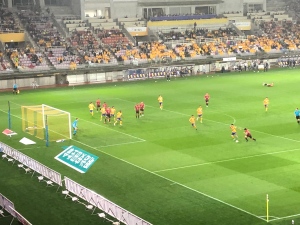 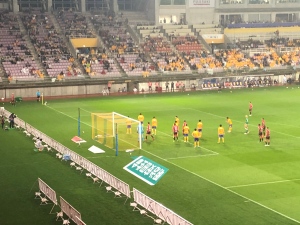 It really was no surprise to see the Consadole goalie up for a corner in injury time as he tried to atone for his earlier error but the home team held on for their fourth win in a row.

My train to Fukshima wasn’t until 10pm so I had plenty of time at the conclusion of this match to get back to Sendai station. I actually had work the following afternoon in Tokyo so only had about seven hours in my Fukushima hotel before starting the long journey back on local trains via Koriyama, Shin-Shirakawa, Kuroiso and Utsunomiya. Admittedly, a tough schedule but no pain, no gain as they say.

Click here to read ‘An English Team Playing A Friendly In Japan! It’s Been A While…’

3 Responses to Return To Sendai…But This Time To See A Live Match & Not Just The Stadium!