The Star Wars Identities Interactive Exhibition Has Arrived In Tokyo 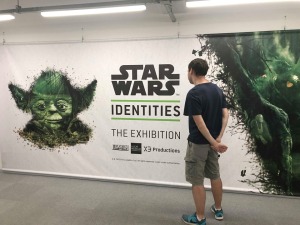 A few months ago I heard that this interactive exhibition was coming to Tokyo and I was immediately excited without knowing too much about it. That was until I saw the price! It was over 3000 yen which is a little expensive to say the least. I needed to think carefully about whether I thought it would be worth it and inevitably I succumbed to the temptation and went on the opening day!

Tennozu Isle was the location and it was held in a warehouse just a stones throw from where I watched England lose on penalties to Argentina in the blind football World Cup Final last March. It was the first day of my school holidays and my birthday too so a treat was in order as I needed to do something with my time and better to go before most other people too.

Booking the tickets for my friend Matt and I was not so easy as the whole process was very technical. First I had to register (username and password) on the ticket website, decide on an arrival time (4-5 pm in our case) payment was credit card only (Japan is still very much a cash-based society so I’ve got used to that style too!), tickets had to be downloaded (no screenshots) and presented on our smartphones on the door, and I had to send a phone e-mail address for my companion who also had to click on a link and register too. All very troublesome but a sign of the times I guess and thankfully we had no problems getting in. 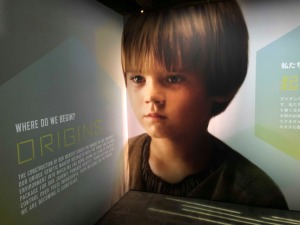 Just before entering we were given special wrist bracelets as well as one-ear headsets with volume control and language option. Commentary came through depending on where you stepped in the place but I personally found it all a bit annoying and not so necessary. The bracelets could be touched against various interactive stations throughout the exhibition with the idea being that visitors use the multi-media machines to help create a unique character inspired by the Star Wars universe.

First you select what species you want to be and then you go from there by choosing the abilities you want to develop, who you hang out with, which experiences have marked you, what’s important to you and numerous other characteristic questions. Basically, it was a personality test with a Star Wars spin on things and all in all it was more fun than I had anticipated beforehand when I wasn’t sure what lay ahead of me.

Around 200 objects from the Lucas Cultural Arts Museum are on display including props, models, costumes, and artwork from the original Star Wars films.

With many people at work it wasn’t actually that busy in the afternoon when we went. There was a healthy flow of people trickling through but there was always plenty of space and time without needing to fight your way through crowds. Seeing stormtroopers and droids is nothing too new for me but it’s always good to see them. All the various alien species were pretty cool too. 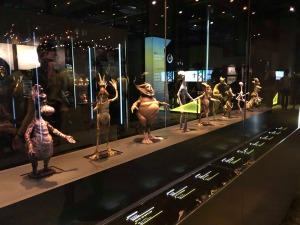 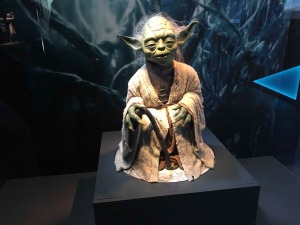 Early concept artwork for the likes of Chewbacca and Ahsoka Tano was interesting stuff that I had never seen and showed what could have been!

There were also helmets and artwork too. 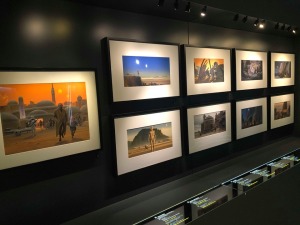 For the last five years or so I have dressed up in my X-Wing fighter pilot costume for various conventions and Halloween parties. It’s a fairly amateur costume though compared to the real thing which was on display here along with Anakin’s dark brown Jedi Knight robe, Owen Lars’s swoop bike, a range of Padmé Amidala outfits and so on.

Darth Vader is quite possibly the most iconic Star Wars character ever but he did not appear right until the final stages.

It all concluded with the 50/50 question of whether to accept the Emperor’s offer to come to the dark side. Once you’ve pushed your wrist bracelet against your desired option you can then see your own Star Wars Identity on the wall in the conclusion room. Our characters are below and they are just two of a supposed 50 million different possibilities.

That wasn’t actually quite the end as there was of course the ubiquitous Japanese souvenir shop which was pedalling all kinds of exclusive products with the Star Wars Identities branding on it.